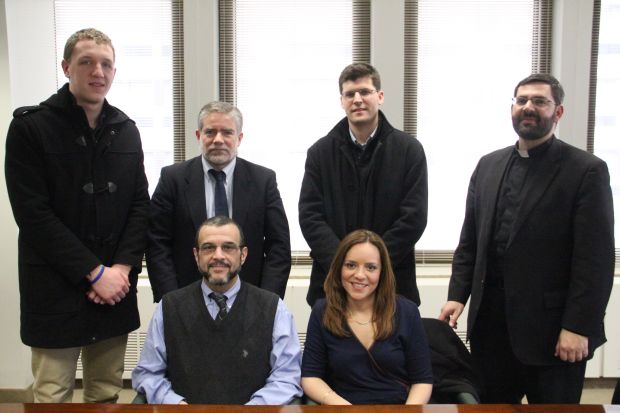 Members of the Neocatechumenal Way visiting Philadelphia March 14 were, back row from left, Cyral Waymel, Emanuele Contini, Andrea Povero and Father Javier Santaballa. Seated are Pedro and Carmen Biaggi. Father Santaballa is rector of the Way's Redemptoris Mater Seminary in the Washington Archdiocese, and Povero a seminarian at the community's seminary in Boston. (Photos by Sarah Webb)

Chances are if you have heard about the Neocatechumenal Way, it is only in a vague manner.

Founded in Spain in 1964 for evangelization of the slums of Madrid, it is “a profound and ongoing formation in Christian living based on the catechumenate – the period of basic instruction in the Christian faith — of the early church,” as Archbishop Charles Chaput described it last year.

Communities of the Neocatechumenal Way help people rediscover their baptism by following a process similar to the RCIA, in which people enter full communion with the church through their parish.

As part of the New Evangelization, “the Way” may have as many as one million members worldwide.

With the full blessing of the Holy See and the local bishops, small parish-based Neocatechumenal Way communities have been established in about 70 dioceses across the United States.

There are about 1,000 communities in this country, each with 35 to 50 members or an average of 40 members, according to Emanuele Contini, who is the responsible (supervisor) for Neocatechumenal Way communities in Southeastern Pennsylvania, Maryland, Washington and Virginia.

At this time communities have formed in seven parishes of the Archdiocese of Philadelphia.

If they continue toward ordination they will be priests of the Archdiocese of Philadelphia in service in the archdiocese, although with the consent of the archbishop they can be missioned in other dioceses in the country or the world.

Contini was in Philadelphia March 14 as part of the ongoing plans to establish “Missio ad Gentes” (Mission to the Nations) communities in two Philadelphia parishes beginning this June – St. Charles Borromeo in South Philadelphia and St. Michael in Northern Liberties.

Both parishes have seen a decline in active parishioners in recent years, making them what is thought to be fertile ground for evangelization.

While the traditional pastoral work of the parishes will continue as before, it will be aided by the two groups of families and their children committed to the Way and settling in the territory of the parishes.

Neocatechumenal Way communities are deliberately small – if they grow larger than 50 or so, they split, and a single parish may have several groups within it.

As part of the Way, each Missio ad Gentes consists of a priest and four or five usually large families. At the request of a local bishop, the groups move into a given area and meet in the homes of residents of the community in order to evangelize them.

Around the world 95 Missio ad Gentes teams exist, with six in the United States: one in Brooklyn, three in Boston and now two in Philadelphia.

Accompanying Contini to Philadelphia March 14 were Father Javier Santaballa, a Neocatechumenal Way priest; Andrea Povero, a seminarian at the Redemptoris Mater Seminary in Boston; and Cyral Waymel, a young adult from Denver who is discerning a vocation to the priesthood.

Also with the group were Pedro and Carmen Dinorhe Biaggi, who along with their six children are coming from Plainfield, New Jersey, to St. Michael Parish to live as part of the Missio ad Gentes mission to Philadelphia.

Auxiliary Bishop of Philadelphia John McIntyre first encountered the Neocatechumenal Way in 1993, when as a young priest he took a group of teens from St. Dominic Parish in Northeast Philadelphia to World Youth Day in Denver.

He was impressed with the zeal evidenced by the many young people in the Way movement who came to the event from other parts of the world.

After Archbishop Charles Chaput became archbishop of Denver, he invited the Way to that archdiocese, where the ministry remains especially strong.

“One of the blessings is the many religious vocations that come from it,” he said. It was not long after that the first Neocatechumenal Way groups were established in the Philadelphia area, and Bishop McIntyre has served as liaison between them and the archbishops of Philadelphia.

Although the Neocatechumenal Way is present in countries around the globe including those without a strong Christian tradition, in Europe and America the emphasis is on the New Evangelization – bringing inactive Catholics back to the fold. 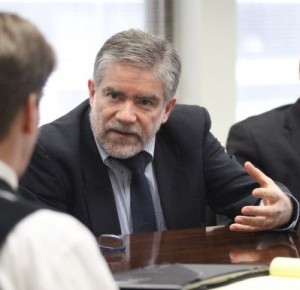 Contini himself is a perfect example. Now 53 and a teacher by profession, he recalls his grandparents in Italy were active participants in their faith and when a priest would come to their village in Italy, the people would kiss his hand. The priest would say, “Praised be Jesus Christ,” and the people would reply, “Always,” Contini said.

Perhaps it was the terrible effects of World War II, or simply secularization, which he considers a deadly virus. His parents’ generation was Catholic but really in name only.

It is only through the Neocatechumenal Way that he himself has become a full participant in the life of the Church.

“The New Evangelization is really the old one,” Contini said. “The first thing is to love one another.”

Cyral Waymel could be a poster child for what the Neocatechumenal Way is trying to accomplish.

“My parents were good Catholics who went to church but they were drifting until they heard about the Neocatechumenal Way,” he said. “I was the seventh of eight children, raised in the Way, but only going through the motions. We were a wealthy family, we had money, but I was drifting, going through the motions. I was trying for affection anywhere I could get it, trying to please my friends to be popular with girls and get good marks to please my parents.

“In high school now, the drugs, the alcohol and sex are becoming the norm. I was the only virgin in my class and it was a Catholic school. It was hard for me, because I wanted these things too. In the end I saw God was the greatest gift. “Through the Way I know that God loves me. Even in my rebellion God protected me. I’m living in Washington now, but I want to come here to give time to God and see if I have a vocation to the priesthood.”

John Brokers is a member of a Neocatechumenal Way group at St. Mary Magdalen Parish in Media, Delaware County, where they have the blessing of Msgr. Ralph Chieffo, the pastor.

“We have 18 to 20 people,” Brokers said. “The name itself says we are reaching back to our baptism. It has affected my life tremendously and it has affected my marriage; my wife and I are both members. Through it I discovered how much Jesus love me, and he took me out of the hell I had created for myself. I found the true Word of God and now I am so proud to be Catholic.”

What is intended at St. Michael and St. Charles parishes is a more formal arrangement. Although they will be parishes for all Catholics and it is not expected that all parishioners will join the Neocatechumenal Way, families with children committed to the ministry will be deliberately settled in the territory of the parishes.

The families will also be a virus but a good kind. They will spread the Good News through Christian example and encouragement and even by door-to-door evangelization.

Although the Neocatechumenal Way has special liturgies approved by the Holy See for its advanced members, the parishes will maintain the traditional liturgies.

NEXT: Ukrainians in U.S. angry over ‘trampling of freedoms in Ukraine,’ says archbishop