Largest crowd to date ‘mans up’ for Catholic gathering 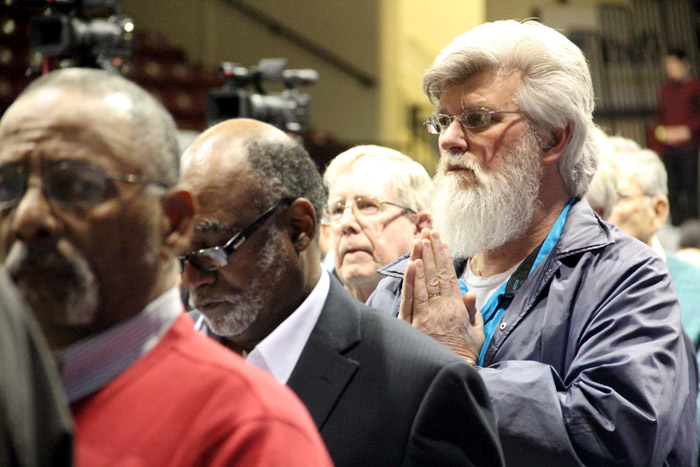 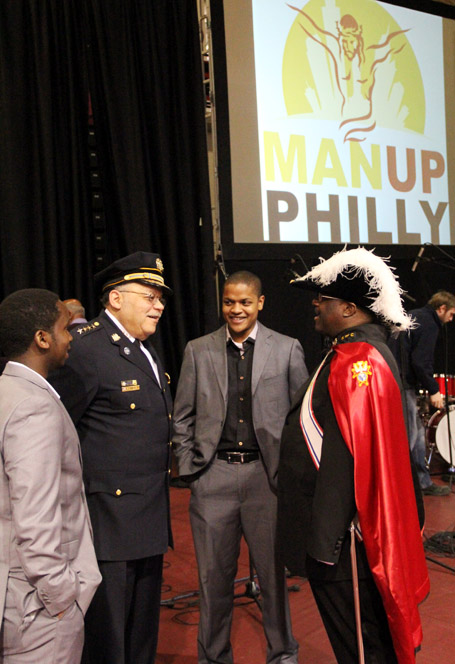 Brian Waweru (left), Moses Mutoko (students from University of Pennsylvania) and John Thomas (in red cape, vice commander of St. John Neumann Chapter 933 Bristol of the Knights of Columbus) chat with Philadelphia Police Commissioner Charles Ramsey after his talk at the conference.

It’s becoming something of a habit. The Man Up Philly Men’s Spirituality Conference, in its sixth year and for the first time held at St. Joseph’s University on March 15, easily surpassed previous numbers.

“We had upwards of 1,400,” said Eustace Mita, who has chaired the event since its beginnings in 2009 as an outgrowth of a Men’s Gospel Group at St. Mary Magdalen Parish, Media.

Archbishop Charles J. Chaput, who gave the opening address in spacious Hagan Arena at the university, said in the event booklet, “God calls every man, whatever his vocation, to be an active agent of Christian love and justice. The mission of the church depends in so many ways on the zeal of her sons.”

During his address the archbishop especially recommended to the assembly the example of St. Thomas More, the 16th century English statesman, martyr, husband and father.

“Sir Thomas More was one of the most distinguished scholars of his time,” the archbishop said. “He was a man of faith who lived what he claimed to believe, and a husband and father first.”

Archbishop Chaput urged the men to obtain a copy of the movie “A Man for All Seasons” about the saint’s life, and even if they’ve seen the film before, “watch it again with your family.”

Conference attendees came from the four corners of the archdiocese and many were repeaters.

Permanent Deacon Bill Bradley, who heads the Office for Black Catholics, brought a group of 13 men from St. Raymond Parish, Philadelphia. This was his fourth year at the conference, which in the past was held in high school auditoriums.

“The new venue works out very well and our men really look forward to this,” he said.

In addition to husbands and fathers there were a number of younger men and even boys in attendance.

For example Robert Post brought a small group from the Knights of St. George, a Catholic youth scouting program. The boys were from the Regina Academies, archdiocesan high schools or home-schooled.

“As dads, it’s our job to catechize them in the faith,” Post said.

The meetings for the St. George Knights always start with Mass, but in addition, “It’s a fun club, we do a lot of outdoor things,” said Theo Austin, of Regina Coeli Academy in Abington, adding, “I’m enjoying today.”

Most of the day’s program, from which some of the younger children were excluded, revolved around the issue of pornography.

“It’s the hardest addiction to beat,” Mita said. “Man Up Philly just bared its soul and said we are going after it with full guns. It is the devil’s way of keeping us in darkness.”

The speakers that addressed the topic included Timothy Donnelly, a businessman and spiritual writer; Dr. Mary Anne Layden, a psychotherapist at the University of Pennsylvania who treats sexual violence victims and perpetrators, and sex addicts; Deacon Harold Burke-Sivers, who specializes in spirituality for men; and businessman David Abel, who spoke of how pornography almost destroyed his own life.

The final speaker of the day was Philadelphia’s Police Commissioner, Charles Ramsey, back at the conference after a four-year hiatus.

Commissioner Ramsey’s message was one of hope. He spoke of how easy it is in police work to become discouraged because of the evil that officers deal with every day.

In spite of this, Ramsey is certain, one has to take into account the circumstances of people’s lives. So many people have never had a decent chance to succeed, especially those without good role models in their lives to mentor them.

“We have to look at the good, and even in the worst, most crime-ridden neighborhoods, there are more good people than bad.”

“I thought he was pretty cool when he was talking about his life coming from a rough area of Chicago,” said Luke Borrajo, of Our Lady of Guadalupe Parish in Buckingham, Bucks County.

“It was inspiring to hear his optimistic view of society,” said Brian Waware, a student from Kenya studying at the University of Pennsylvania. “As a young person in college I thought his message was good, focusing on seeing the good in people.”

The conference concluded with an afternoon Mass celebrated by Msgr. Ralph Chieffo, pastor of St. Mary Magdalen in Media, which was fitting considering that this is where Man Up Philly had its beginnings.

About 1,400 men attended the conference, according to organizers. Here they listen to a morning talk by Archbishop Charles Chaput.

NEXT: Thomas Eakins leaves the seminary