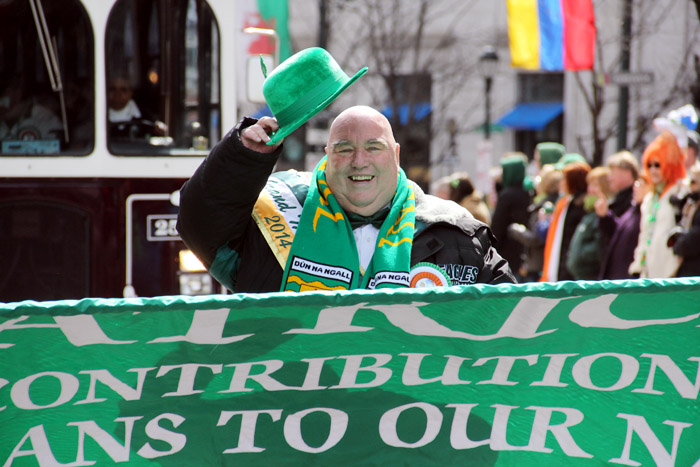 It’s an old Irish legend almost forgotten. March 17, St. Patrick’s Day, is the date St. Patty takes the “cold stone” out of the water and it’s time for spring planting. He must have forgotten this year because it was downright cold on St. Patrick’s Day and not much better on Sunday, the 16th, when the Irish of Philadelphia held their big parade.

As always the parade was preceded by a Mass celebrated by Archbishop Charles Chaput at St. Patrick’s Church near Rittenhouse Square. And as always it was probably the largest congregation the stately old church will see in the year.

(See our extensive photo gallery with dozens of photos of the Mass and parade here.)

Front and center was Jimmy Murray, Philadelphia’s favorite toastmaster, who was Grand Marshal for the parade to follow.

“I’m a back pew guy,” Murray said. “This is humbling, sitting in the front pew and listening to the choir sing ‘Our Lady of Knock.’ I felt like I was at my own funeral! But it isn’t for me, it is for my family and the people I can never pay back.”

That choir he mentioned was the alumni choir of St. James High School, Chester, which closed 21 years ago. Old Bulldogs never forget their alma mater, nor do they forget their mostly Irish heritage.

High school bands are one of the favorite features of the big parade, and among them was the Cardinal O’Hara Band with retiring school president Bill McCusker leading the way.

“I’ve been doing this for 25 years and before that I marched with Archbishop Kennedy High School,” McCusker said. “I’ll be back next year; I’ve reserved a place with Cardinal O’Hara. It’s a wonderful day when everybody is Irish.”

Undoubted Irish was Mary Lou MacDonald who marched with the dignitaries as a member of the Irish Parliament representing the City of Dublin.

“Dublin is the greatest city in the world,” she said, adding diplomatically “next to Philadelphia. I think this is fantastic, colorful and a real statement about the Irish in America and the contribution of Irish people to America and across the world.”

Of course you can’t have a parade without awards, and with a couple of hundred marching units the judges had their work cut out for them. Just to name a few: the Second Street Irish were named Outstanding Fraternal Organization; Bishop Shanahan Cheerleaders and Marching Band were the Outstanding Musical Unit; Rince Ri School of Irish Dance was voted best Children’s Irish Dance Group.

Lou Baldwin is a freelance writer, proudly Irish, who lives in Philadelphia.

PREVIOUS: Ukrainians in U.S. angry over ‘trampling of freedoms in Ukraine,’ says archbishop

NEXT: Largest crowd to date ‘mans up’ for Catholic gathering