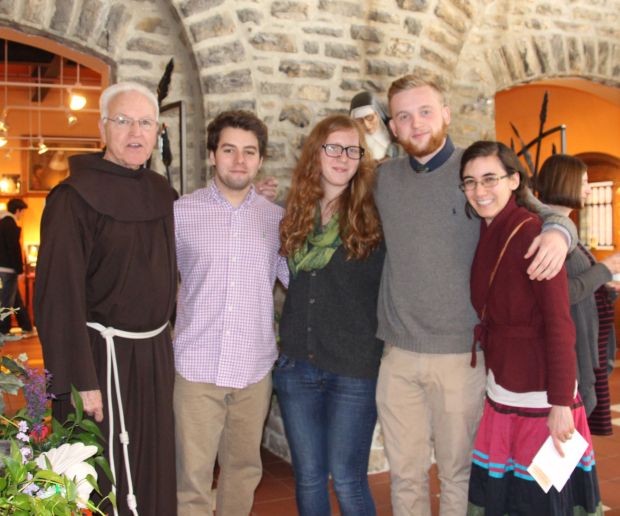 Franciscan Father Michael Duffy (left), one of the founders of the Franciscan Volunteer Ministry, stands with some of the program's volunteers March 2 at the motherhouse of the sisters of the Blessed Sacrament.

At left, Sister Patricia Suchalski, president of the Sisters of the Blessed Sacrament, presents the order’s National Justice Award to Matthew Johnson and Katie Sullivan representing the Franciscan Volunteer Ministry, at the Bensalem motherhouse March 2.

It is the tradition of the Sisters of the Blessed Sacrament to present their annual National Justice Award to a person or persons as part of the celebration of the Feast Day of their foundress, St. Katharine Drexel.

This year, after the Mass in celebration of her feast day at their motherhouse in Bensalem, the sisters varied the tradition by presenting the award to a lay organization – the New York-based Franciscan Volunteer Ministry, sponsored by the Holy Name Providence, Order of Friars Minor.

Locally four young volunteers who will serve one or two years live and work at St. Francis Inn, a popular soup kitchen in the Kensington section of Philadelphia.

“The purpose of the lay volunteers is to grow in faith, love and hope  by serving  the poor and marginalized  and working for social justice in Franciscan ministries,” said Sister Patricia Suchalski, president of the Blessed Sacrament Sisters, in her presentation remarks. “The volunteers live in Gospel-based communities as witnesses to their faith through prayer and a simple lifestyle. Their gifts and talents are exchanged with the people of God with a loving Franciscan spirit.”

That description could aptly describe the sisters themselves, except in their case it is a life-long commitment rather than a temporary mission.

This difference was noted by Father Michael Duffy, O.F.M., who was the homilist in the Jubilee Mass celebrated by Father Fidelis Weber, T.O.R.

In an era when neither seminaries nor convents have their former numbers but do have emerging lay ministries, “The Holy Spirit is working, maybe not in the way we are used to, but the Holy Spirit is alive and well,” he said.

Father Duffy, one of the founders of the Franciscan Volunteers, usually preaches at their opening retreat. “I tell them this is going to be the greatest year of your life,” he said. “Service, in God’s eyes, is the greatest thing you can do.”

He compared this service to the efforts of athletes or actors striving for an Olympic medal or Academy Award, things most of us often think of as great. 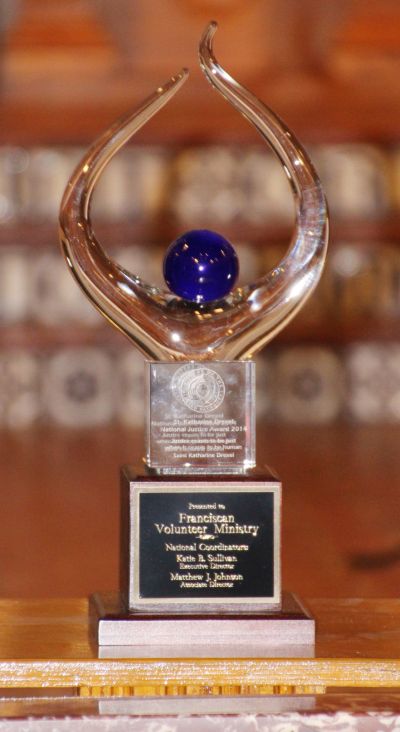 The National Justice Award is annually presented by the sisters of the Blessed Sacrament to a person or persons as part of the celebration of the feast day of their foundress, St. Katharine Drexel.

“Earning a gold medal in the Olympics is great,” he said, “but in Jesus’ eyes it is probably not great. In Jesus’ eyes the definition of greatness is service.”

Volunteers are generally between the ages of 19 and 26, and most are immediately post-college, but not necessarily so, explained Sullivan, who is a graduate of Holy Cross University. She is herself a former Franciscan Volunteer, missioned to St. Francis Inn in 1995.

Volunteers “live in intentional community in a life of direct service,” she said.  That service to the poor “is in the relationship to each other, because in giving we receive.”

The work of volunteers is especially important for St. Francis Inn, which neither receives nor seeks city, state or federal government funding. It is a pure Franciscan charity that can only exist through the use of volunteers and the support it receives by donations from many parishes and churches.

Tammy Kinney, a current volunteer who was cantor at the Mass, is from Utica, N.Y. She first encountered the Franciscan Volunteers during a Christmas break week of service at St. Francis Inn during her freshman year of college. “I encountered the poor and the marginalized I always dreamed of serving as a child,” she said.

Kinney still loves the work even if it is not always easy. “There are moments when I feel exhausted without anything to give any more,” she said. “It is when I hit rock bottom that I feel the need to fill myself with God’s hope and Spirit in order to keep going out to the people.”

All the volunteers are single, if for no other reason there are no facilities for married couples, but that doesn’t mean some of them do not date.

For example, Christopher Huot, who was a Franciscan Volunteer at the Inn from 1999 to 2001, met his future wife, Heather Burns, during her year of service, 2000-2001. Married now, they have two children with a third expected shortly. The family attended the St. Katharine Drexel Mass and the award ceremony.

“We have tried to stay connected with the ministry for the past 13 years,” said Heather, a graduate of Boston College. The Franciscan Volunteer service “changed our whole lives,” she said. “It is the foundation of our marriage.”

For Heather, who is the daughter of Permanent Deacon Robert Burns of Philadelphia’s St. Matthew Parish, assistance to St. Francis Inn continues. Her son Matthew is in third grade at Nazareth Academy Grade School, where “they do a lot for St. Francis Inn and we participate in that,” she said.

Not all parents are thrilled when their sons and daughters take time off to serve as a volunteer after completing their education instead of immediately seeking a well-paying job, Father Duffy conceded in his homily.

That would not be the case with Christopher Huot’s parents, Gerry and Ann Huot, who relocated from Denver, Colorado to the Philadelphia area to be near Christopher when he was serving as a Franciscan Volunteer. “We were very happy for him, and it didn’t surprise us in the least,” Gerry said. “We thought he might go into a seminary or religious order (but) that didn’t happen. This is a new form of ministry in the church.”

Through volunteering at St. Francis Inn himself, Gerry Huot eventually joined the staff of diocesan-conducted St. John’s Hospice in Philadelphia, from which he just retired.

“I’m still associated with both St. Francis Inn and St. John’s Hospice,” he said. “I have a great affection for them.”

PREVIOUS: The truth of life emerges