The truth of life emerges 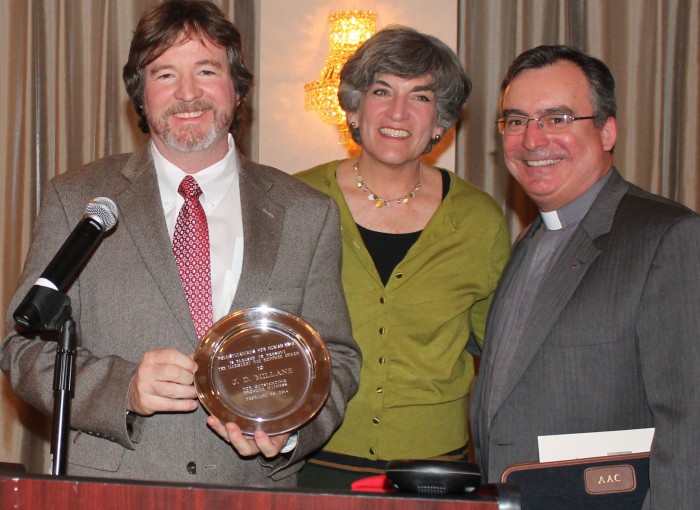 J.D. Mullane, left, accepts the Margaret Way Hoffner Award from Pennsylvanians for Human Life, presented by Anita Nardone with Deacon Alvin Clay, who served as master of ceremonies for the Feb. 23 annual dinner at Springfield Country Club. Mullane is an op-ed columnist for Calkins Media's newspapers in Bucks County.

J.D. Mullane is an opinion columnist for the three newspapers of Calkins Media: the Bucks County Courier Times, Burlington County Times and the Intelligencer. On Sunday, Feb. 23, he and his family were on their way from their Levittown home to Springfield Country Club in Springfield for the Pennsylvanians for Human Life (PHL) annual banquet where he would receive the pro-life education group’s annual Margaret Way Hoffner Award.

His perverse GPS took him by way of Lancaster Avenue in West Philadelphia, where he passed the boarded up abortion clinic of where the notorious Dr. Kermit Gosnell murdered born-alive infants. Mullane had never seen the abortion facility before, but it had everything to do with the reason he would receive the award.

Mullane is a member of an endangered species — a pro-life writer in a generally hostile secular press.

Interestingly, his most widely circulated pro-life statement was not through his well-read columns, but rather a spur of the moment photograph he snapped at Gosnell’s murder trial. As they say, a picture is worth a thousand words.

He decided to go to the trial anyway on the chance that someone from Bucks County might have a role in the case to give him the hook he was looking for. Because Gosnell’s arrest had national notoriety, he called the day before the trial began for press credentials on the assumption media space would be at a premium.

When he arrived, he discovered the court had the same assumption, because four rows of seats were blocked off for the press, and they were empty. For that entire day he was alone in the press area, listening to some of the most sickening testimony he had ever heard. A few members of the Philadelphia press did stop in and sat on the other side.

The media seats that would have been filled if a pro-life activist were on trial on a serious charge remained empty.

“I have never been ashamed that I am a journalist but that day I was ashamed for journalism,” he said.

The next day, seeing this was still the case, he decided he might as well sit on the other side too, since there was plenty of room. Looking across the aisle, those rows of empty chairs really bothered him. There were no TV networks, no news magazines; no nationally distributed newspapers; as far as they were concerned it was not something they wanted to cover. It is the same thing that happens every year at the March for Life in Washington.

On the spur of the moment, he took out his iPhone and snapped a picture. He knew full well taking photos in a Pennsylvania courtroom is against the law, and if caught he could be arrested.

That night he posted the picture on Facebook and to his complete surprise it went viral.

On that same day, Kirsten Powers, a writer for USA Today, published a scathing denunciation of the national media for ignoring a legitimate national story that did not fit their political agenda.

Pro-life advocates across the country picked up Powers’ column and Mullane’s picture and mounted a social media campaign mostly through Twitter, demanding coverage of the trial.

Mullane received calls from around the country and the world. His photograph was even blown up and displayed at a US congressional session. A couple of major media outlets accused Mullane of doctoring the photo, but the charge couldn’t stick because no one could cite a member of the national media who was in fact there.

“We have a saying in journalism,” Mullane said, “When you are being honest and the facts are on your side, truth emerges.”

“It was the first time in the history of American journalism that the media has been embarrassed into covering a story,” Mullane said.

“Probably it will not surprise you that most of the people in my line of work are left of center on social issues especially abortion,” he said. “For the average journalist Roe v. Wade is carved in stone. It will never change. It is as eternal as Mount Rushmore, or Gibraltar, or the Pyramids. The right to an abortion for almost any cause is immutable.

“Mainstream journalists,” he said, “see pro-life people like yourselves outside clinics protesting, writing op-ed pieces, writing letters, as an annoyance. They see you as terribly misguided, as strange and maybe even irrational and you don’t deserve to be included in their nightly newscast.”

There is good news too, Mullane believes, because of new technologies including ultrasound images and preemies who are born alive and considered miracle babies, which are changing people’s minds.

“Pro-life will win this fight and someday historians will look back on our time aghast that abortion for any reason was legal, because the truth will emerge.” 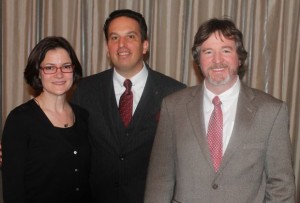 Green, who is originally from Allentown, told of her upbringing by a flower-child mother, dropping out of high school and 25 years ago becoming pregnant at age 17. Her own instinct was to keep the child and become a good mother. Instead she was coerced by her boyfriend and others into having an abortion.

Not long after this, wracked by guilt she attempted suicide but failed. Intensive treatment in psychiatric facilities followed, and after emerging from treatment, as she realizes now, she suppressed her feelings of guilt by becoming an ardent pro-abortion advocate. In the beginning she volunteered at a local abortion clinic and within a year was a full-time employee.

First she had to learn the euphemisms. One could not say “baby,” or “abortion,” or even “fetus.” It was “the tissue,” “your surgery,” “your appointment,” and her personal favorite, “the product of your conception.”

The clinic itself was well-run and within the law. She was trained to take blood pressure, administer pregnancy tests, explain medical assistance, birth control pills and give post-abortion counseling. Actual abortions were done by a doctor assisted by a nurse.

One job she hated was working in the autoclave room, where instruments were sterilized and post mortems were done. She’d had nightmares about her own abortion and now this was compounded by nightmares of what she saw every day.

When she asked to be excused from this duty the director came straight to the point. “What we do here is end life. If you are not okay with that, you can’t work here,” she told her.

“I was young, I was idealistic, I was trying to find my own way,” she said. “I was surrounded by strange, independent women, all of whom thought abortion was okay. They believe they are doing a good thing. They are completely blinded, and I bought it hook, line and sinker.”

Green eventually left the clinic’s employ but continued to volunteer. She went on to a college degree, married and is the mother of three children.

It was only a few years ago that something happened to change her mind. A good friend of hers agreed to be a surrogate mother for a childless couple. Part of the contract she signed was an agreement to terminate the pregnancy if the fetus tested positive for a genetic disorder.

Tests indicated the baby would have Down syndrome. Her friend was told she would have to abort the baby but would nevertheless receive in full the sizable fee promised for serving as a surrogate. Her friend aborted.

Green was appalled. This was so wrong, she was certain. It was the first domino and the others fell.

If that abortion was wrong, what about other abortions? What about her own abortion?

That was wrong too, and, “once I was able to say I was wrong, I immediately tried to give back,” Green said. “I had been wrong for a long time, now I do what I can to save other people from making the same mistakes I made.”

Since the time of her decision Green has met scores of women, post-abortion former abortion clinic workers, who have left the industry and now speak out in defense of life. She herself provides potent witness for the cause of life.