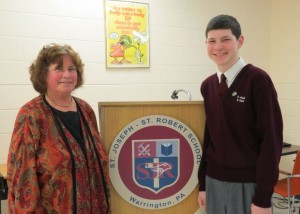 Andrew Funk (right) of St. Joseph/St. Robert School in Warrington accepts his scholarship as a Neumann Scholar from Ann Murry Hileman of the Connelly Foundation.

Several area Catholic schools announced their students have been named Neumann Scholars by the Connolly Foundation.

The honor enables each student to attend an archdiocesan Catholic high school beginning next fall on a four-year scholarship.

In the program begun by the Connolly Foundation in 1995, 857 academically talented eighth-grade students qualified through their grades (92 or higher) and Terra Nova standardized tests (score of 120 or higher) to take an examination in January, of which 37 were selected as Neumann Scholars.

Only five students each from Bucks, Delaware and Montgomery counties receive this award, with the remaining scholars from Philadelphia.

According to the Connolly Foundation, 161 Neumann Scholars currently attend the 17 archdiocesan high schools.