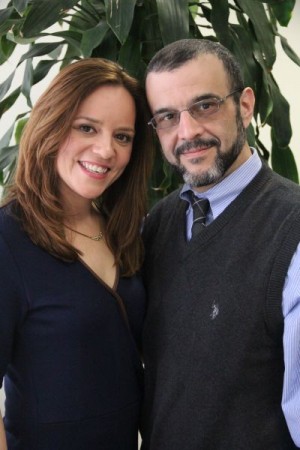 Carmen and Pedro Biaggi are bringing their six children from Plainfield, N.J., to be part of the Missio ad Gentes community in the Neocatechumenal Way coming in June to St. Michael Parish in Philadelphia. (Sarah Webb)

During a special ceremony Feb. 1  at the Vatican, Pope Francis blessed and commissioned 450 families of the Neocatechumenal Way who will go forth into the world to “evangelize with love, to be zealous and joyful missionaries.”

Among those so commissioned were Pedro and Carmen Dinorhie Biaggi, who will now leave their New Jersey home with their children to resettle and to evangelize in St. Michael Parish, Philadelphia.

Like the apostles themselves, they too had to be evangelized before accepting this mission, which is really from Jesus.

Pedro was baptized Catholic when he was about six months old, but shortly after that his parents left Catholicism for a Pentecostal church. He grew up in Plainfield, N.J., with no real contact with the Catholic religion of his birth.

“I never accepted my father’s authority because he was an alcoholic,” he remembers. “I looked for a father in drugs and everything else. All I knew was street life, the gangs, having sex; everything about having a good time.”

In 1992, when he was 21, a friend of his was killed in front of the parish church. He went to the funeral there, and the priest invited him to come for catechesis.

He accepted the offer and even though the catechesis was in Spanish, a language he did not speak although his family was originally from Puerto Rico, the one thing he heard over and over was “God loves you.”

That began his journey of faith, through the Neocatechumenal Way. Now he will leave his work as a machinist in Elizabeth, N.J., and along with Carmen and the children come to St. Michael’s.

Carmen’s life experience was different: she was raised in the Catholic faith and first exposed to the Neocatechumenal Way two years earlier than Pedro when she was 12.

“I rebelled in my teen years and it left me with a question mark,” she said. “I thought people who went to church were a bunch of fools and I left the church. I chose my friends, I chose sex, I chose everything the world has to offer.”

Finally she attended a Neocatechumenal catechesis and her eyes were opened.

“The Lord had to take a long time with me,” she said. “The one thing that kept me on the journey was my knowing that God has never given up on me.”

Eventually she and Pedro wed, and now they have six children; the eldest, Matthew, is in the Redemptoris Mater seminary of Dallas studying for the priesthood.

They also had two little ones who died, a tragedy that often destroys a marriage. It was not so with Pedro and Carmen.

“I see that God has a plan in all of this,” Pedro said. “We have two angels to protect us and our marriage and our children. We need these two angels, I know my sons didn’t die out of tragedy; God called them to be angels.”

NEXT: One eventful life, written beautifully