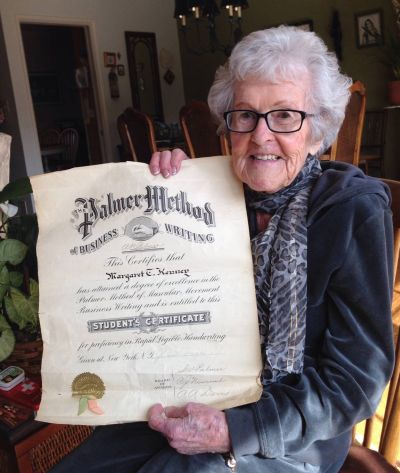 Margaret McSweeney’s family treasures the penmanship certificate she earned while at St. Patrick School in Philadelphia in the 1930s.

Back in the 1930s when Margaret Kenney McSweeney was in eighth grade at St. Patrick School near Rittenhouse Square in Philadelphia she won a city-wide competition in the Palmer Method of writing, beating out a couple of hundred other kids from all over.

That was a very big deal back then. Next to the Baltimore Catechism, nuns stressed Palmer Method. For this she got a pen, long gone, and a beautiful certificate, which is now a family treasure. That was just the beginning for a very eventful life.

She loved St. Patrick’s, the church where her father was baptized in 1898. “The school was a fantastic,” she remembers. “I took art lessons on Saturdays and they were only 25 cents a lesson, can you imagine?”

After St. Pat’s she went on to West Catholic High School for Girls, often walking across the Schuykill River bridge to get there, the sort of thing kids did back during the Great Depression.

It was all nuns of course at West, with Sisters of St. Joseph teaching English, Immaculate Heart sisters teaching math, Franciscans teaching French and so forth. She was a good student and served in student government the whole four years, which probably helped her resume when after graduation she got a job with Ma Bell as an information operator.

“A lot of girls got married right after high school back then. If you didn’t you were considered an old maid,” Margaret said. “I wasn’t going to do that. I thought it was stupid.”

After a couple of years she was reading the daily paper (even young people really used to do that) when she saw an item about the Sisters of Mercy looking for candidates for a brand new nurse training program at Fitzgerald Mercy Hospital in Darby.

She applied, and was one of 10 girls accepted. Of that first class, which received their R.N. in 1944, Margaret, who is turning 91, is the last survivor. 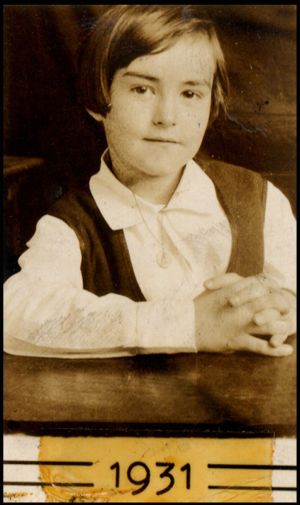 The nursing students lived in a house across from the hospital and their day started with 6:30 a.m. Mass, followed by breakfast and long hours of study and hospital work. These were war years and because the government needed for nurses it offered to take them into the Nurses Corps. Mother Lioba, who headed the program, said, “We’ll teach them our way.”

It was hard, Margaret recalls: “They taught us with an iron hand, but it worked.”

Back then, many people died of maladies that are effectively treated today. Margaret was assigned to work in the polio ward, where most patients were either children or young adults, including men in the military. She remembers one young sailor from San Diego who was gravely sick, who told her, “I want an avocado so bad.”

Margaret had never heard of avocados, but she went down to the Italian Market on her day off and asked if they sold them. “You must mean an alligator pear,” a grocer told her. She bought one for a dollar, a lot of money then, and took it back to the hospital. Sure enough, it was an avocado. 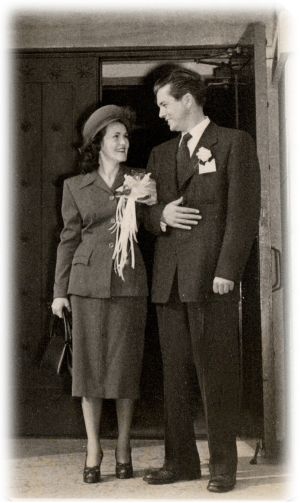 Margaret and Jack McSweeney on their wedding day in 1947 at the Cathedral Chapel of St. Vibiana in Los Angeles.

“That was a piece of heaven,” said her patient after she fed it to him. Three days later he died. Margaret was heartbroken, but she knew she had done a really good thing for him at the end of his life.

Back then Villanova College was participating in the V12 program that gave Army and Navy men training before they went on to flight school. The hospital chaplain asked the student nurses if they would go to a dance with the trainees, and they agreed. That’s how she met Harold McSweeney, and it wasn’t too long after that they fell in love, but it wasn’t to be.

Harold developed a strep throat, something that could be very serious in the days before antibiotics, and he became gravely ill when it traveled to his heart muscle.

Margaret was nursing him, and at his request she contacted his brother Jack, who was a film editor in Hollywood. Jack managed to get on a flight east, something that was hard to do during the war.

Harold, who looked terrible, asked his brother to take Margaret to a nice dinner, because she was working so hard caring for him. The two went out together and talked the evening away about Harold. 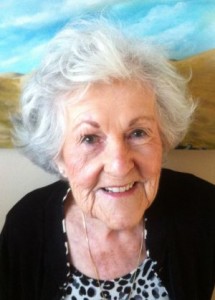 Margaret McSweeney at her home in California this year.

Margaret got home late and there was a message; she should come to the hospital because Harold “had taken a turn for the worse.”

“That’s what we were supposed to say when someone was dying instead of telling people that and maybe giving a heart attack, so I knew,” she said. Harold was dead when she got there, and she accompanied Jack to New York for the funeral.

Afterwards Jack went back to Hollywood and the two became pen pals. Over the next couple of years the long-distance friendship deepened to romance and finally in 1947, Margaret quit her job and flew out to California, where the two were married at the Cathedral Chapel of St. Vibiana on Wilshire Boulevard in Los Angeles. Hasty or not, the marriage lasted 50 very good years until Jack’s death.

Cathedral Chapel was an interesting parish. Margaret remembers at one Mass Jimmy Durante sat in front of them and she was amazed when he put a $20 in the collection plate. “I was a Depression girl. I never saw that before,” she said.

She took a nursing position at St. John’s Hospital in Santa Monica, where she would see Hollywood stars galore. Once when Bing Crosby was a patient there and his regular nurse was off she filled in. One of the Sisters told her to take him up to the chapel for Mass.

“I don’t want to go, I haven’t had breakfast yet,” Crosby grumped, which was a strange thing to say by a guy who made millions playing priests in films. So Margaret went to another floor and took one of Crosby’s sons, who was in the hospital for minor surgery, up to the Mass.

After a while she noticed Bing in a wheel chair in the back of the chapel with one of the nuns. They weren’t about to let him miss Mass.

Pat O’Brien and other stars were also visitors or patients over the years.

Margaret’s biggest thrill came at the 1963 Academy Awards when husband Jack was nominated for the film editing award for “Mutiny on the Bounty” but it was a tough year with so many great films — among others “To Kill a Mocking Bird,” “Lawrence of Arabia,” “The Music Man” and “The Miracle Worker” — and Jack didn’t get the award.

At the after party, Gregory Peck, who had taken the Oscar that night for playing Atticus Finch in “To Kill a Mocking Bird,” asked Margaret for a dance.

“I went home and told my kids I wouldn’t wash where we touched for three months,” she said. 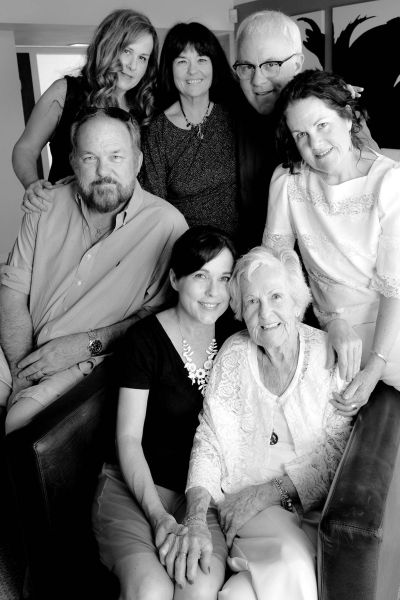 Margaret, front, posed for this recent photo with her six children in California.

By that time she and Jack were living in Redondo Beach where they were founding members of St. Lawrence Martyr Parish. That’s where they raised their six children – twins Maureen and Jack, Michael, Meg, Colleen and Erin.

Margaret quit nursing when the kids were young but went back later, first in a hospital and then as a private duty nurse.

Now because of her age she doesn’t go out much, and Erin lives with her to help. She rarely goes to movies. “In the old days there were good movies; it wasn’t all this sex stuff,” she said.

And as for that penmanship award, “My handwriting is terrible now,” Margaret said. “We had to write so small on the charts I used to print. Now my printing is great but my handwriting went to pot.”

NEXT: A friend to all men, great and common