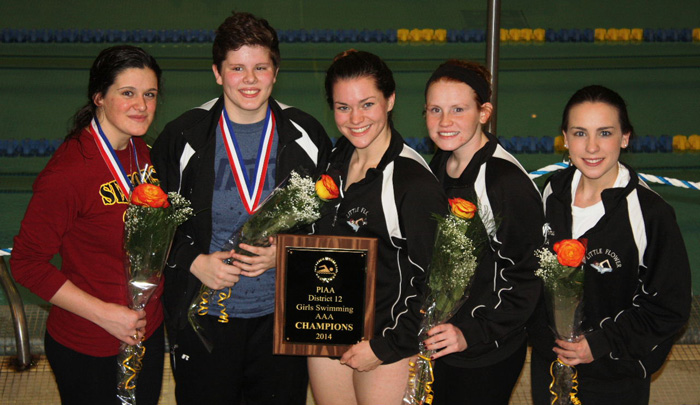 When the Catholic League swimming season began, few people considered Little Flower as a legitimate contender to snare a championship.

Actually, “few” might be putting it too nicely. Not a single Sentinel claimed to have believed before the season that Little Flower would ultimately be the last team standing against the likes of favored Archbishop Ryan and Archbishop Wood.

However, Little Flower’s 15-year coach Sean Clothier had allowed himself to bask in the reverie of a possible title, albeit with a reminder to remain realistic about such a fantasy coming to fruition.

“I knew we had a shot at it, but also knew that it would take more than just five or six people having great seasons,” Clothier said. “It would take everybody, and I mean everybody.”

Lo and behold, just about every Little Flower starter ended up contributing a career-best performance. And so, on the weekend of Feb. 14-15 at Widener University, the Sentinels of Little Flower were crowned the Catholic League champions.

As he and his athletes celebrated the program’s first-ever title, Clothier reminisced about previous hardships, especially the 2004 season in which the Little Flower roster consisted of only six swimmers – numbers low enough to seriously threaten the existence of future endeavors.

“I told them about that and other stories of past swimmers who kept us alive and paved the way for this,” Clothier said. “This team wasn’t the only one to sacrifice so much of themselves.”

“Winning the Catholic League championship has always been a dream for Little Flower swimming,” Coleman said. “Our team has come such a long way, and being a part of the team when we finally achieved this is something I’ll never forget.

“Honestly I never would have thought that I would be a part of such a successful team. The team was always confident, but never expected anything. We would always try our absolute best, and just hope that it would end in our favor. I think that we deserved everything that we were awarded this season.”

Coleman was one of several Little Flower swimmers who participated in the state championships last week. A graduate of Resurrection of Our Lord School and currently a member of St. Albert the Great Parish in Huntingdon Valley, Coleman was particularly moved by her team’s collective achievements because her two sisters, 2013 graduate Caitlyn and 2010 alumna Lauren, are former Little Flower swimmers.

Like her sister Caitlyn, Coleman was a team captain, joining Emma Coyle and Catherine Spreckley. Those three, along with All-Catholic Rose Pisicano and Rachel Wisniewski, are the only seniors among Little Flower’s 21-woman roster.

Clothier, a 1996 Father Judge graduate, labeled Coleman as “literally the hardest working swimmer I have ever seen,” and said that proved critical to Little Flower’s triumph.

“She leads by example,” Clothier said. “It’s infectious to the rest of the team. They followed right with her.”

As the season progressed, so did Clothier’s confidence.

“The girls kept re-raising the bar,” he said. “There was a great group of talent on this team, and heading into the championship, we knew we had a legitimate shot.”

The aforementioned Coyle, a product of since-closed St. William School, said she didn’t think about a potential title until the midway point of the season.

When she noticed that Ryan had defeated Archbishop Wood by fewer points than what Little Flower had won by, Coyle started to re-think the possibilities.

“I’ve been part of this for four years,” Coyle said. “We have a small team and no one expected this.

“But our coach talked about it. He said that we could do it this year. He said if we swam to our abilities, this year could be something special. Turns out he was right.”

As the meet drew to a close, Coyle was one of several Sentinels in the warm-down pool. It was there she learned that all of that four-year effort had proven to be more than worth it.

“It’s amazing,” Coyle said. “Little Flower isn’t that great in many sports (though the bowling team also captured the Catholic League title this year), and no one really pays attention to the swim team.”

NEXT: Softball, baseball and other Catholic League sports heat up in spring