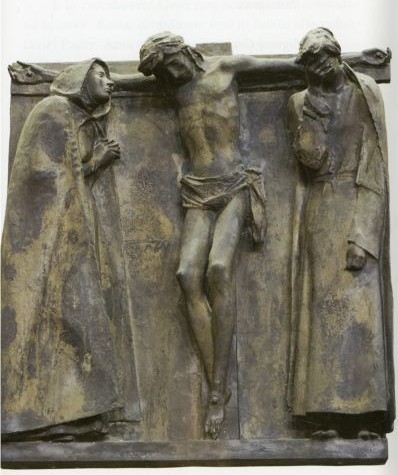 Jesus dies on the cross in this image from the Stations of the Cross booklet to be used at Rome’s Colosseum April 18. (CNS photo/Libreria Editrice Vaticana)

VATICAN CITY (CNS) — The often silent plight of sexually abused children, victims of domestic violence, prisoners, the abandoned elderly, the unemployed and immigrants facing hostility will be given a powerful voice during the Stations of the Cross at Rome’s Colosseum.

Thousands of pilgrims and millions of television viewers will be asked to reflect April 18 on the wounds afflicting the world today: political stalemate, economic insecurity, substance abuse, torture, selfishness, fear and the despair of failure.

God is on the side of the hurting and the abused, allowing himself be exposed on the cross “to redeem every abuse wrongly concealed,” said one of the Way of the Cross meditations. Several days before the pope’s Good Friday commemoration, the Vatican released the text, along with the commentary and prayers for the 14 Stations of the Cross.

Just as the bleeding and tortured Christ urged the women of Jerusalem weeping for him to be women of faith, not of grief, the meditations call on people worldwide not to be disheartened by the world’s crises, but determined to lend a hand and move forward in hope.

Every year, the pope asks a person or group of people to write the meditations that are read aloud during the nighttime torch-lit Good Friday ceremony, which he presides over.

For 2014, Pope Francis picked Italian Archbishop Giancarlo Maria Bregantini of Campobasso-Boiano — a former factory worker, longtime prison chaplain, champion of the unemployed and fiercely outspoken critic of the Italian mafia. In essence, the pope chose the very kind of apostolic missionary he has been calling all Christians to be.

Reflecting on the second station — Jesus takes up his cross — the archbishop wrote that the heavy cross is also “the burden of all those wrongs which created the economic crisis” and its dire consequences of job insecurity, corruption and financial speculation.

“This is the cross which weighs upon the world of labor, the injustice shouldered by workers,” he wrote. By shouldering his burden, Jesus shows people to “reject injustice and learn, with his help, to build bridges of solidarity and of hope,” as well as to “recover a respect for political life and to work to resolve our problems together.”

For the eighth station — Jesus meets the women of Jerusalem — the archbishop deplored domestic violence, writing, “Let us weep for those men who vent on women all their pent-up violence” and to weep for women who are “enslaved by fear and exploitation.”

But compassion is not enough, he wrote: “Jesus demands more.” Follow his example of offering reassurance and support “so that our children may grow in dignity and hope.”

The archbishop had equally strong words about the sexual abuse of children and its cover-up.

For the tenth station — Jesus is stripped of his garments — the archbishop crafted an image of the utter humiliation of Jesus being stripped naked, “covered only by the blood which flowed from his gaping wounds.”

“In Jesus, innocent, stripped and tortured, we see the outraged dignity of all the innocent, especially the little ones,” the archbishop wrote.

The Lord allowed himself to be exposed on the cross, he wrote, “in order to redeem every abuse wrongly concealed, and to show that he, God, is irrevocably and unreservedly on the side of the victims.”

The meditations included reflections on the need to take “the side of the weak, resisting injustice and defending truth whenever it is violated;” the importance of mercy in accepting others’ weaknesses and one’s own failures; and the call to “embrace the vulnerability of immigrants, and help them to find security and hope.”

There were several reflections on problems faced by families, especially mothers who worry about their children, “who lack prospects or who fall into the abyss of drugs or alcohol, especially on Saturday nights.”

The problem of child soldiers got attention as did environmental pollution that poisons children, “who are dying of tumors caused by the burning of toxic waste.”

Echoing Pope Francis’ call to “go out,” the meditations prescribe the pope’s same approach: recognizing one’s limitations and sins; “finding God in everyone”; sharing one’s gifts; repairing injustice; and knowing that new life is born “precisely at the moment of trial” and pain.

Born in northern Italy, the 65-year-old archbishop spent almost all of his life working in Italy’s south, combating complacency, corruption and social neglect.

He made headlines in 2006 when he formally announced to his then-Diocese of Locri-Gerace in Calabria that he was extending the reach of excommunication to those who “abort the lives of our young people” through targeted and cross-fire killings, and poisoned landscapes.

The archbishop spent his early years as a factory worker before his ordination in 1978. He worked as a prison chaplain and hospital chaplain before becoming a bishop in 1994. Through his many books and interviews, he championed the same causes — often in the same language — as the future Pope Francis.

“We have to ask ourselves … whether the worker is a person or a piece of merchandise?” he said in a 2012 magazine interview. “You can’t treat them as a product to throw away, to eliminate because of budgetary reasons, so that they are shelved like surplus in a warehouse.”

Archbishop Bregantini said the commentary and prayers he wrote were inspired by the pope’s apostolic exhortation, “The Joy of the Gospel.”

“It’s all in homage to ‘Evangelii Gaudium,'” which “really helps us to take a hard look at today’s ordeals” and to see the world through the merciful life-giving gaze of Jesus, the archbishop told Vatican Radio in March. With Christ “we will conquer fear, darkness, emptiness and isolation.”

Editors: The Way of the Cross meditations are available in English and Spanish at: http://www.vatican.va/news_services/liturgy/documents/index_via-crucis_en.html.