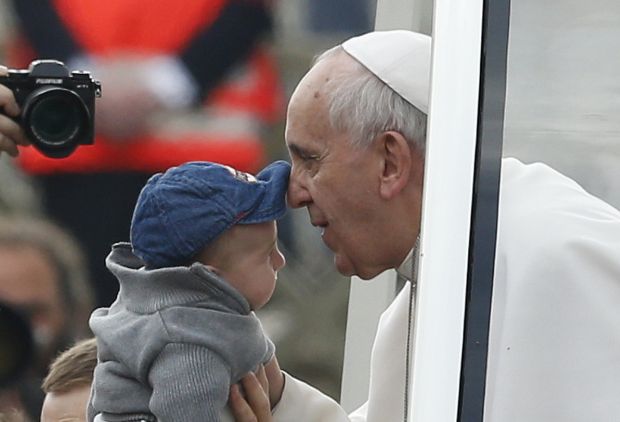 Pope Francis kisses a child as he greets the crowd during his general audience in St. Peter's Square at the Vatican April 9. (CNS photo/Paul Haring)

In the middle of Holy Week, Pope Francis encouraged people to pick up a crucifix, kiss it and recite the simple prayer, “Thank you, Jesus. Thank you, Lord.”

At his weekly general audience April 16, the pope said Jesus willingly endured the most humiliating, most painful path to death: betrayal, mocking, being nailed to a cross “like the worst criminal.”

Watching Jesus suffer and die, the pope said, “we see the suffering of all humanity and we find the divine response to the mystery of evil, suffering and death. We often feel horror because of the evil and pain around us and we ask, ‘Why does God allow this?’ It hurts deeply when we see suffering and death, especially when it involves the innocent. When we see children suffering, it wounds our hearts.”

(Watch a video of the pope and his invitation for Holy Week below.)

“This week it would do all of us good to look upon a crucifix, kiss the wounds of Jesus,” he said. “He took upon himself all human suffering.”

“We want God, in his omnipotence, to defeat all injustice, evil, sin and suffering with a triumphant victory,” the pope said. “But instead, he shows a humble victory. Humanly speaking, it seems to be a failure, but God is victorious precisely in that failure.”

Jesus’ death “is not an accident,” the pope said. “His death — that death — was already written. Really, we don’t have a full explanation; it is a bewildering mystery, the mystery of the great humility of God.”

During Holy Week, the pope said, Christians should meditate on the suffering of Jesus and recognize, “this is for me. Even if I was the only person in the world, he would have done it. He did it for me.”

“When everything seems lost,” the pope said, that is the moment that God intervenes “with the power of the resurrection,” restoring hope to humanity with a father’s love.

God does the same thing in the lives of everyone who suffers, he said. When suffering seems unbearable and everything is dark, “that is the moment closest to the resurrection.”

“Jesus, who chose to live this life, calls us to follow the same path of humiliation,” Pope Francis said. “At the times in our lives when we cannot seem to find any way out of our difficulties, when we find ourselves in the deepest darkness … at the hour when we experience that we are fragile and sinful, it is precisely then, at that moment, that we should not mask our failure, but open ourselves to God with trust, just as Jesus did.”

Riding around St. Peter’s Square before the audience, Pope Francis picked up two young passengers and allowed the boys to ride in the back of the popemobile until he was ready to begin his catechesis.