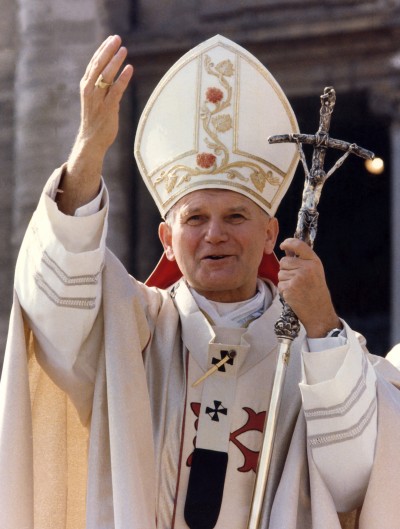 VATICAN CITY (CNS) — Blessed John Paul II, who will be canonized April 27, was one of the most forceful moral leaders of the modern age.

He brought a philosopher’s intellect, a pilgrim’s spiritual intensity and an actor’s flair for the dramatic to his role as head of the universal church for more than 26 years.

The Polish pope was a tireless evangelizer and forceful communicator, speaking to millions in their own languages. But toward the end of his life, his powers of speech faltered with his worsening illness, which left him often unable to even murmur a blessing.

The first non-Italian pope in 455 years, Blessed John Paul became a spiritual protagonist in two global transitions: the fall of European communism, which began in his native Poland in 1989, and the passage to the third millennium of Christianity.

Within the church, the pope was just as vigorous and no less controversial. He disciplined dissenting theologians, excommunicated self-styled “traditionalists,” and upheld often unpopular church positions like its opposition to artificial birth control. At the same time, he pushed Catholic social teaching into relatively new areas such as bioethics, international economics, racism and ecology.

In his later years, the pope moved with difficulty, tired easily and was less expressive, all symptoms of the nervous system disorder of Parkinson’s disease. Yet he pushed himself to the limits of his physical capabilities, convinced that such suffering was itself a form of spiritual leadership.

He led the church through a heavy program of soul-searching events during the Great Jubilee of the Year 2000, fulfilling a dream of his pontificate. His long-awaited pilgrimage to the Holy Land that year took him to the roots of the faith and dramatically illustrated the church’s improved relations with Jews. He also presided over an unprecedented public apology for the sins of Christians during darker chapters of church history, such as the Inquisition and the Crusades.

His social justice encyclicals, including his landmark document, the apostolic letter “Novo Millennio Ineunte” (“At the Beginning of the New Millennium”), made a huge impact, addressing the moral dimensions of human labor, the widening gap between rich and poor and the shortcomings of the free-market system. He called for a “new sense of mission” to bring Gospel values into every area of social and economic life. At the pope’s request, the Vatican published an exhaustive compendium of social teachings in 2004. 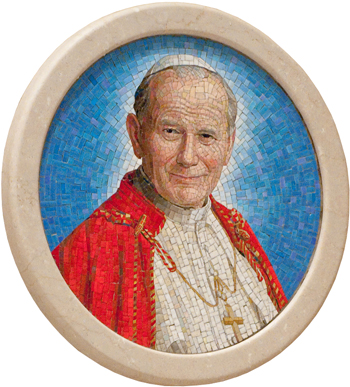 A mosaic of Blessed John Paul II is seen during its Oct. 20 dedication in the Chapel of Our Lady of Czestochowa at the Basilica of the National Shrine of the Immaculate Conception in Washington. (CNS photo/Matthew Barrick)

The pope approved a universal catechism as one remedy for doctrinal ambiguity. He also pushed church positions further into the public forum. In the 1990s he urged the world’s bishops to step up their fight against abortion and euthanasia, saying the practices amounted to a modern-day “slaughter of the innocents.” His sharpened critique of these and other “anti-family” policies helped make him Time magazine’s choice for Man of the Year in 1994.

After more than 26 years as pope, Blessed John Paul died at the age of 84 at the Vatican April 2, 2005, the vigil of Divine Mercy Sunday.

PREVIOUS: Days in the life of Pope John Paul II

NEXT: For Blessed John XXIII, calling Vatican II was an act of faith