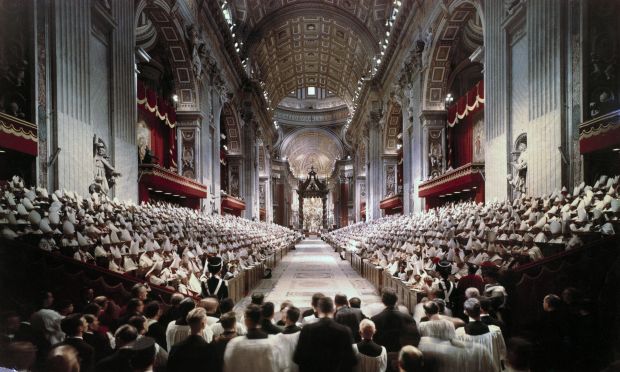 Pope John XXIII leads the opening session of the Second Vatican Council in St. Peter's Basilica at the Vatican Oct. 11, 1962. A total of 2,540 cardinals, patriarchs, archbishops and bishops from around the world attended the opening session. (CNS photo/Giancarlo Giuliani, Catholic Press Photo)

VATICAN CITY (CNS) — Blessed John XXIII called the Second Vatican Council in the conviction that it was necessary for the Catholic Church, yet without pre-conceived ideas of what it would accomplish, said Vatican II participants who recalled the event half a century later.

Blessed John had come to a “conviction that something ought to be done in order to make the church more responsive to this modern world, in order to make the modern world more responsive to the church. And that intuition went far beyond his intellectual preparation,” said Jesuit Father Ladislas Orsy, a “peritus” — or expert theological adviser — at the council.

Cardinal Loris Capovilla, who served as Blessed John’s private secretary during his pontificate, was privy to some of the pope’s first remarks, made only a few days after his election in 1958, about what would become Vatican II.

Cardinals and bishops had presented the new pontiff with a litany of challenges before the church — “not doctrinal but pastoral problems,” Cardinal Capovilla said — in areas that included liturgy, diplomacy, and the education and discipline of priests.

“My desk is piling up with problems, questions, requests, hopes,” Blessed John told his secretary. “What’s really necessary is a council.”

When the secretary refused to comment, the pope interpreted his silence as disapproval.

“You think I am old,” Blessed John told him. “You think I’ll make a mess out of this enormous task, that I don’t have time. … But that’s not how you think with faith. … If one can only begin with the preparatory commission, that will be of great merit. If one dies, another will come. It is a great honor even to begin.”

Yet Blessed John’s ideas greatly influenced the outcome of Vatican II in certain areas, including liturgy.

Cardinal Paul Poupard, who served as a peritus at the council, said Blessed John believed “liturgy better expresses the mystery of the church insofar as everyone takes part, so the more who take part, the better.”

In that spirit, Cardinal Poupard said, the liturgical reform that followed in the council’s wake produced a missal that was simpler, clearer and celebrated in modern languages.

The pope’s influence was also eventually seen in the council’s 1965 declaration “Nostra Aetate,” which exonerated the Jewish people of collective guilt for the killing of Jesus and affirmed that God’s covenant with them had never been abrogated.

Cardinal Georges Cottier, a Vatican II peritus, said Blessed John appreciated the special need for the document in the aftermath of the Holocaust. His sensitivity to the matter reflected his experience as a Vatican diplomat in pre-war Bulgaria, where he had befriended many Jews, and his later actions to save Jews in the region from the Nazi genocide.

“So he knew the drama” of the Jews, Cardinal Cottier said. “Right away he said yes, with enthusiasm,” to a proposal for such a document.

Yet the pope who called the council refused to define it for the bishops who would actually serve as its fathers. When asked what Vatican II was, Cardinal Poupard recalled, Blessed John would reply: “On the subject of the council we are all novices. But when all the bishops are there, the Holy Spirit will be there and all will go well.”

Cardinal Roger Etchegaray, another Vatican II peritus, recalled the now-legendary occasion when the pope stepped to the window of his study and said: “‘What is the council? I don’t know.’ He opened the window and said, ‘At least some fresh air for the church.'”

Though Blessed John did not have a set program for the council, he did have models for it, including some contemporary secular initiatives.

“After the Second World War, it was a very good thing that there arose three international institutions: the U.N. for peace, the FAO (Food and Agriculture Organization) for bread, UNESCO for culture,” Cardinal Capovilla recalls the pope saying. “Why don’t we get together to talk?”