This is a still from the HBO short documentary "One Last Hug: Three Days at Grief Camp." (Courtesy onelasthug.com) 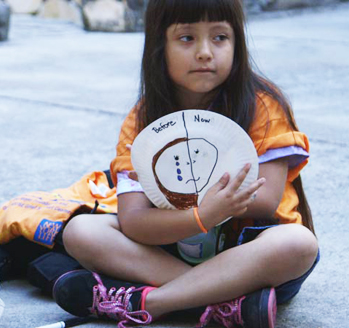 The efforts by retired major-league pitcher Jamie Moyer and his wife, Karen, to help children get through their grief after having lost a loved one is receiving star treatment in April on the HBO pay-cable channel.

A short documentary profiling the Moyer Foundation’s work in this regard, called Camp Erin, with more than 40 locations across the United States, debuts April 14 at 8 p.m. EDT. Called “One Last Hug: Three Days at Grief Camp,” (see the website here, and view the movie’s trailer) the program looks at just a handful of the dozens of children who go to the weekend camp to better understand their feelings of loss, anger and sadness after a parent, sibling or other loved one has died.

On the mound, Souderton native Moyer, a Catholic, may be known for a lot of things, like toiling for 25 years in the majors, being the oldest starter (at age 49) to win a game, winning 269 games in his career, giving up more home runs (522) than any other big-league pitcher and winning a World Series ring with the 2008 Phillies in the twilight of his career.

But being known for Camp Erin will suit him just fine, thank you.

“We started our foundation, we really didn’t have a direction,” Moyer told Catholic News Service in a telephone interview from Philadelphia, where he is part of the Philadelphia Phillies’ broadcast team, before the April 8 home-opener.

“I had been involved with a grief camp in South Bend, Ind., when we lived there,” he said. Karen Moyer went to the University of Notre Dame and met Jamie when he was a Chicago Cubs rookie and she was assisting on TV broadcasts. “I saw how it helped children coping with a loss,” he continued. “We wanted to try to find an organization like that. We couldn’t, so we started one.”

They named it Camp Erin after Erin Metcalf, a cancer-stricken Seattle-area teen whose wish was to meet Moyer. “Her family, with their good graces, allowed us to use her name in the camp,” Jamie Moyer said.

This is a still from the HBO short documentary “One Last Hug: Three Days at Grief Camp.” (CNS photo/courtesy HBO)

For Karen Moyer, “this is what I do. This is my life. I will do this until I die,” she told CNS in a separate telephone interview. This is in addition to going to daily Mass and raising the couple’s eight children — including two adoptees — ranging in age from 7 to 22.

“When you can take it to a platform of a documentary that is somebody else’s idea and HBO buys into it, a national audience takes away a lot of things from this documentary. I find there are many adults who when (they) see it, wish they had it. They want to get involved, they want to volunteer. They know kids who need the camp, they know where to find funding to sustain the camps and establish the camps,” Karen Moyer said, adding, “Our partnership and relationship with New York Life (Insurance Co.) and HBO has been nothing but a blessing to the mission.”

Thanks in part to a $1 million donation by the Moyers in 2007, Camp Erin was able to expand to each city where there is a major-league team. Now there are 45 U.S. cities where there is at least one Camp Erin retreat each year.

“It grows every year. And that’s what’s so important about what we do. It continues to grow. We have to be able to continue to reach out,” Karen said. Jamie offered one reminder: Even if 3,000 children and teens get helped each year by Camp Erin, “there’s a million and half kids up to age 17 in this country dealing with a loss. So there’s a need.”

Karen Moyer said the foundation has a five-year plan in which it hopes to expand the number of cities hosting a Camp Erin by three to five each year, and solidifying partnerships with such youth-serving organizations as the YMCA, YWCA and the Boys and Girls Club. “I like to think about what else I can do for the child. They’re in all kinds of distress,” she added.

“We have a national resource list for those who are grieving a loss. Children reach out to us, so we reach out to get them into camp as soon as possible,” she said. As a result of the documentary being show, she added, “I hope millions of dollars fall from the sky.”

The foundation also runs another kind of camp, called Camp Mariposa, to help children deal with a household situation in which someone else in the house is living with addiction.

“One Last Hug,” will receive repeated replays through the Memorial Day weekend on HBO and its affiliated channels, including HBO 2, HBO Family, HBO Signature and HBO Latino.

The schedule of airings can be found at HBO’s website.