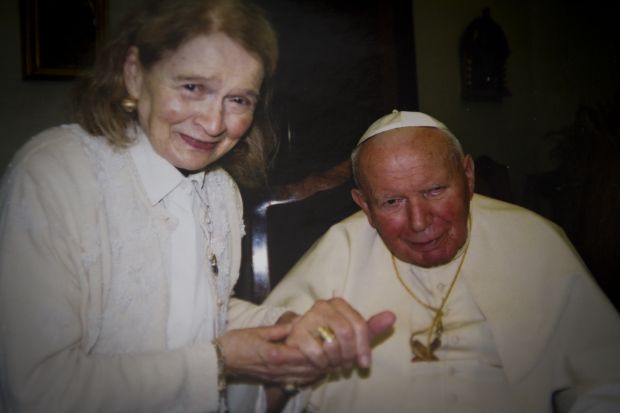 PHILADELPHIA (CNS) — Hanging on the wall in her office is a large painting of horses standing in a field with overcast skies and a vast, fallen tree, struck down by lightning in a ferocious storm.

This painting, Lena Allen-Shore was told, would never sell, as no one would want a plain picture of horses. But Allen-Shore doesn’t just see the horses. She sees the fallen tree and the ones standing around it, as well as the horses, which endured the brutal storm.

Despite a traumatic past, one still has the strength to carry on.

(Watch an interview with Lena Allen-Shore.)

This is something that Allen-Shore, a Jewish Holocaust survivor, learned from her “dear friend,” Blessed John Paul II, through various letters, poems and visits over the course of some 25 years.

“He gave me something very important,” Allen-Shore told Catholic News Service in an interview at her home in Philadelphia April 2. “He taught me how to believe that good people exist.”

To her, he was a man of compassion. He was someone who built bridges between different cultures, despite any tensions of the past.

To her, he was the “Apostle of Hope.”

Their friendship began in 1978, shortly after Cardinal Karol Wojtyla of Krakow, Poland, was elected pope and took the name John Paul II. A fellow Pole, Allen-Shore wrote to him, addressing their similar experiences during World War II and her hope for a better future.

She received a response, and the two corresponded back and forth until his death in 2005. They communicated in various languages, though mainly their native Polish tongue.

In 1996, Allen-Shore contacted now-Cardinal Stanislaw Dziwisz, who was secretary to Blessed John Paul, and organized a visit to the Vatican. She and her family visited Blessed John Paul many times afterward.

Aside from their Polish backgrounds, Allen-Shore and her friend were able to relate through their mutual love for poetry.

“When you are a poet, there is a part of life that is different,” Allen-Shore said. “You have a special part of you that is connected with the world that becomes very important.”

A poet knows how to feel, rather than see, Allen-Shore said. A poet is “connected with life” and at the same time, not preoccupied with himself or herself. 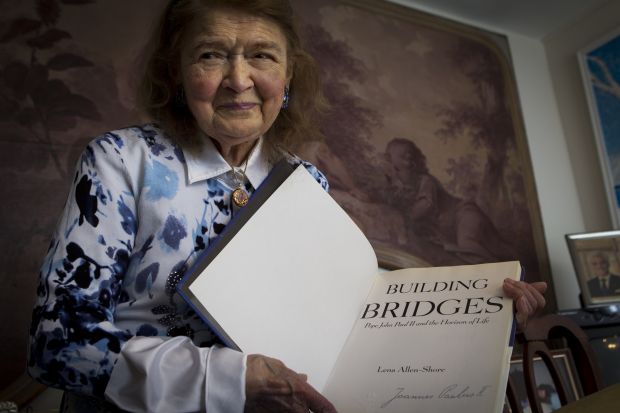 Poet Lena Allen-Shore holds a copy of a book she wrote, “Building Bridges,” which chronicles her friendship with Blessed John Paul II, who signed this copy. (CNS photo/Chaz Muth)

Allen-Shore has written several poems and more than 100 songs based on her life and experiences, many of which inspired by her time with Blessed John Paul.

She often plays these songs on the white piano in the corner of her living room. The piano, like every inch of the walls in her home, holds dozens of photographs illustrating special times of her life.

By the piano hangs a photo showing one of her later visits with Blessed John Paul. She’s handing him a copy of her book “Building Bridges: Pope John Paul II and the Horizons of Life,” which was inspired by their many interactions.

“What is the most important (thing) in the world today?” Allen-Shore asked, remembering her friend. “To have a little bit of compassion. This compassion of the Holy Father was very important.”

She shared about their trip to Jerusalem where Blessed John Paul demonstrated compassion and the ability to “build bridges” among people of different faiths.

During this trip, he visited Yad Vashem, a Jewish memorial to the Holocaust.

“Here came a man in the white robe — a human being — who understood the Holocaust because (he) was in Poland during the war,” Allen-Shore said. “He was somebody who came out from Christianity and said, ‘It’s time to make peace. It’s time to understand each other.'”

A tear rolled down her face.

“He showed me that somebody cares for all those little children who died,” she said.

At that moment, he was not a pope, she said. He was already a saint.

In that same trip to Jerusalem, Blessed John Paul visited the Western Wall, a last remnant of the Jewish temple and significant place for Jewish people to visit. At the wall, he placed a written prayer, asking for forgiveness.

“He put a letter, like everyone who goes there,” Allen-Shore said. “Who was he? He was the man who was a pope, and he wrote the letter to God. … Do you think I would forget this? Never.”

Allen-Shore also accompanied Blessed John Paul on a visit to Assisi, Italy, in 2002 for the World Day of Prayer for Peace.

She remembered how tired Blessed John Paul was during the later trips in his life, but he persevered.

“I will never forget how many times I was afraid he would faint,” Allen-Shore said. “But he was (still) talking to people. Why? Because he knew that he could give them something.” 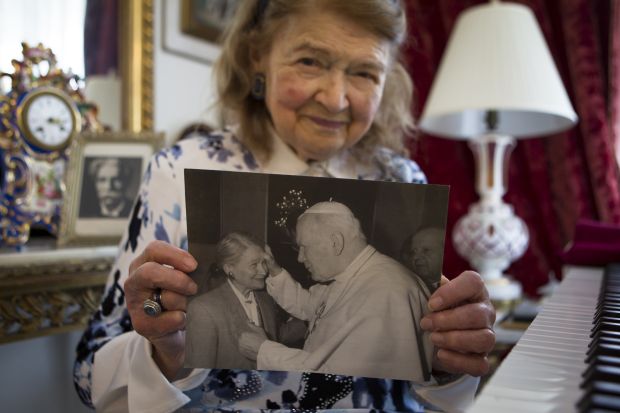 Blessed John Paul died April 2, 2005, at the Vatican, after suffering septic shock and heart failure. He was 84.

On April 9, 2005, Allen-Shore wrote one final letter to her friend.

In it, she described the scene at his funeral where “millions of people (came) to pay their respects.” Allen-Shore attended the funeral Mass with her son, Jacques, sitting very near the small, wooden coffin.

A Bible sat on top the coffin, she wrote, and during the service, a “docile” wind somehow moved it. Jacques also noticed the shift.

“The book is no longer on the middle of the coffin,” he had whispered to his mother during the service. “The book now rests on the left side, there upon the heart of John Paul II — where it has always been.”

Allen-Shore then remembered what Jacques had said in June 1996, when they first visited Blessed John Paul.

The Vatican invited Allen-Shore to attend the canonization, but because of her health, her doctor advised her not to go.

Though deeply saddened, Allen-Shore knows he was always a saint to her.

“The Jews, they don’t have saints. But you know what? I have this respect for everyone who’s like him,” she said. “He is a saint for me. Definitely yes.”

Allen-Shore has promoted understanding between different religious groups and cultures for several years. For 33 years in the U.S., she taught some 28 courses on the Holocaust, the importance of art, communication and the meaning of life.

Her book “Building Bridges: Pope John Paul II and the Horizon of Life” chronicles her meetings with Blessed John Paul, several poems and biographies of their lives.

The third edition, published in 2007, includes letters from Blessed John Paul as well as his response to the book after reading it in 2003.

“(The book) you gave me was written ‘with heart,'” he wrote to Allen-Shore. “Thank you for seeing deep into my thoughts and understanding the intentions guiding my actions.”

PREVIOUS: Foundation of Jamie Moyer and wife helps kids deal with loss of loved one