Future of evangelization is here, and it’s on the Internet, priest says 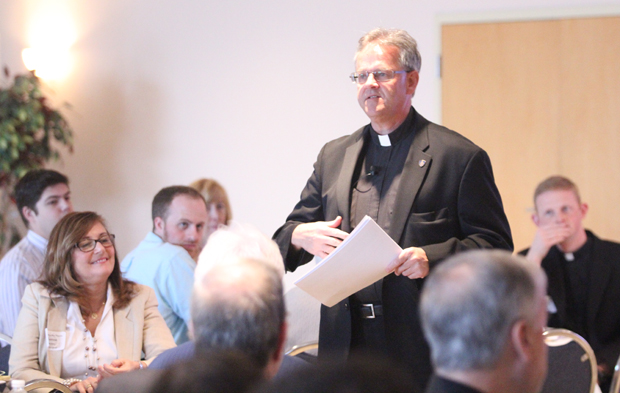 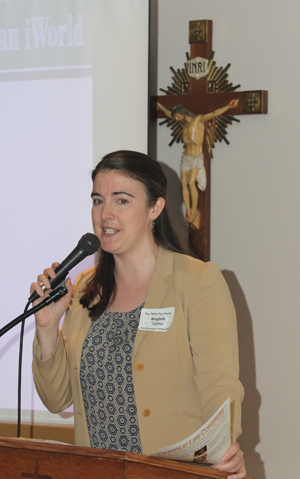 Meghan Cokeley, director of the archdiocesan Office for the New Evangelization which sponsored the workshop, introduces a speaker during the workshop. (Sarah Webb)

Tables of lay people and clergy sat in the dimly lit auditorium at St. Thomas of Villanova Parish in Rosemont Friday, May 9 and focused on the projector screen detailing a talk by Father Thomas Dailey, O.S.F.S., on the new evangelization in the Catholic Church.

He called for broadening the presence of faith and religion on the Internet, notably through parish websites and social media.

His talk was part of the Adult Faith Formation Spring Workshop, sponsored by the archdiocesan Office for the New Evangelization, with the theme “New Media, New Mission: Evangelizing Through Social Communications.”

It began with Morning Prayer led by Father John Stokely, parochial vicar at St. Robert Bellarmine Parish in Warrington, which preceded Father Dailey’s talk. That was followed by a talk by new media consultant Tom Shakely.

Father Dailey used common examples, such as tech giants Amazon.com and Apple, emphasizing the staggering trend toward digital media and the necessity for the forum because of its dominant marketing principles.

Amazon’s suggestion bar, shown every time someone views a book or one of thousands of other products, makes people consider buying more, which they often do. The experience changes the way they think, Father Dailey suggested.

The world, he said, is wired whether we like it or not. He also entertained bringing these principles to the faith forum and questioned how to apply Catholic values to the Internet.

“Knowledge is no longer in here,” said Father Dailey, pointing to himself. “It’s out there, all around us. It’s in the cloud.” 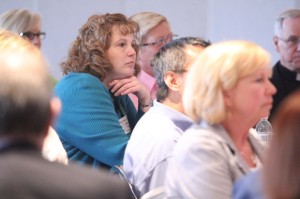 This line drew laughs from the audience members, one of which was Sue Benzie, who attended as a part of Lighthouse Catholic Media.

“I’m a little older,” Benzie said. “So I’ve got to learn how to communicate with this media.”

The Internet brings up the dilemma of absence versus presence, Father Dailey noted. A person can occupy space in close proximity to others but remain consumed in digital media while maintaining connectedness to a wide variety of people, friends and information.

This individual is present to the digital sphere but absent to the world around him or her. 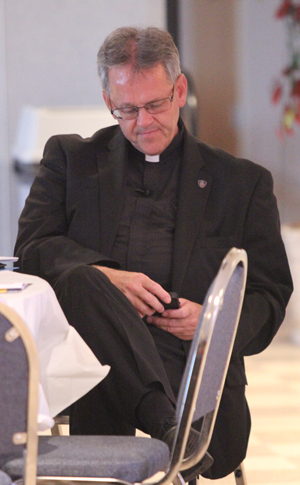 Father Dailey, who in his talk said many people today are remain connected to the Internet and with other people through technology, does just that during the workshop. (Sarah Webb)

Father Dailey also emphasized the ubiquity of the Internet. The medium is always available and not something an individual turns on and off.

He emphasized that the way the church speaks and teaches needs to change with the times because the Internet is now the dominant media platform.

“The Internet is not just a gadget, gimmick or tool,” Father Dailey said. “It’s a world.”

Meghan Cokeley, director of the archdiocesan Office of the New Evangelization, said most parishes aren’t aware of the available tools. The event’s goal was to give people ways to implement the new evangelization on their websites.

“It was a healthy presentation of positives and negatives of the digital world,” Cokeley said. “He sees it as a gift. You can tell he is a man of God.”

Some parishes, though, don’t have the websites to promote Catholicism. Dailey reiterated a hope to change that dilemma.

“We need to convince folks that we have to do this,” Cokeley said. “It’s not an option, as Father (Dailey) said.” 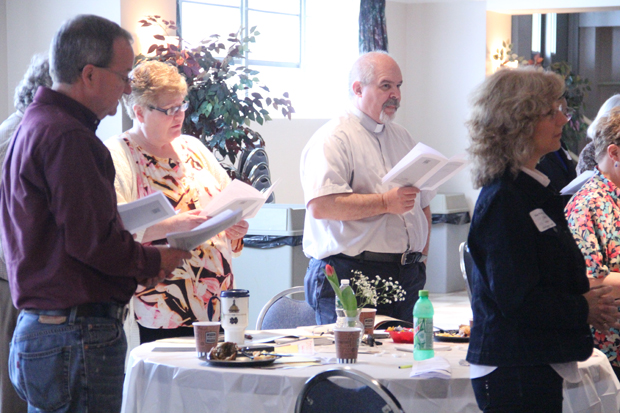 Participants in the workshop at St. Thomas of Villanova Parish, Rosemont, pray Morning Prayer together before the start of the program. (Sarah Webb)

PREVIOUS: On the ballot: A review of candidates’ positions