Help on the road to health 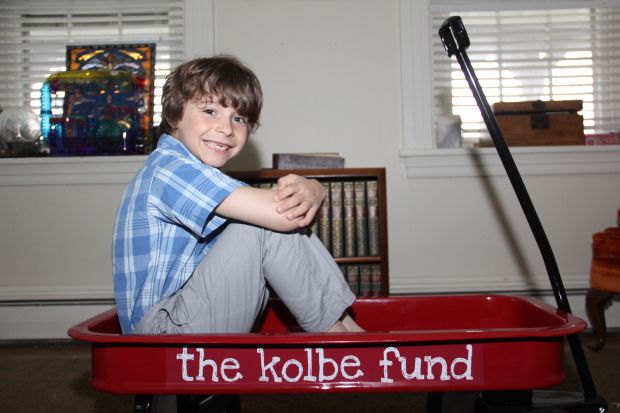 Max Schnittman of Exton shows off the iconic wagon that symbolizes the fund begun by his parents to help children like him who are beating serious illnesses. The Kolbe Fund helps pay for overnight stays of families who are seeking hospital treatment for their children. (Sarah Webb) 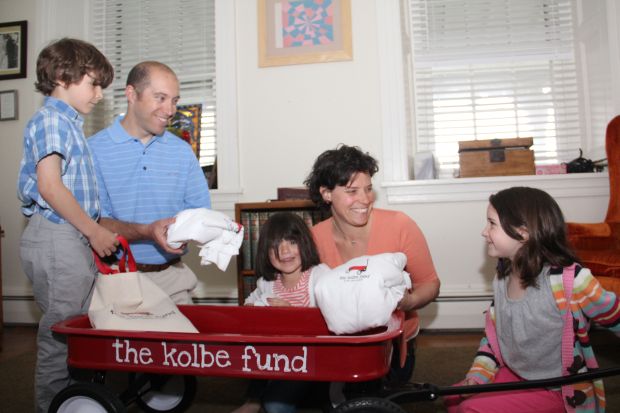 It is almost unimaginably difficult to have a child with a life-threatening illness, and even more so if the family has to travel to a distant city for treatment at a hospital where physicians and surgeons have a special expertise in treating that illness.

It simply adds another worry when the parents have to cope with finding a place to stay near the hospital with all of the added expense that can entail.

Aaron and Kate Schnittman, who live in SS. Philip and James Parish in Exton, faced that problem in 2013 when the eldest of their three children, Maximilian Kolbe, had to undergo delicate surgery at Children’s Hospital of Boston to excise a rare non-cancerous growth at the base of his brain on his pituitary gland.

The prognosis was perhaps one chance in 10, at most, for a successful outcome that would leave Max with a normal life.

Max underwent surgery through a craniotomy, the opening of his skull with a positive result. Typical of today, the entire process took five days, during which the Schnittman family stayed at Boston’s Ronald McDonald House free of charge.

Meanwhile friends of the Schnittmans in the Philadelphia area ran a huge benefit fundraiser on the assumption the family would need money to cover costs not covered by medical insurance. As it turned out, they did not need the money, but in gratitude they decided to use it to help other families with sick children who really needed some financial assistance.

The way they chose to do so complements the work of the Ronald McDonald Foundation, whose main mission is to assist families with very ill children. The foundation traces back to 1974 when Philadelphia Eagles General Manager Jimmy Murray persuaded the McDonald’s Corporation to assist in raising funds to aid the family of Eagles player Fred Hill, whose daughter Kim was being treated for leukemia at Children’s Hospital of Philadelphia.

Through this effort the first Ronald McDonald House was established in West Philadelphia to provide temporary shelter and other services to visiting families with hospitalized children.

Today there are more than 300 Ronald McDonald Houses worldwide, including two in Philadelphia that provide 65 rooms, but not nearly enough to cover the needs.

Aaron and Kate Schnittman took the $7,000 raised by their friends and used it to assist families with children at Children’s Hospital of Philadelphia who could not be accommodated at the Ronald McDonald House.

To accomplish this they established the Maximilian Kolbe Fund, an ongoing 401(c)3 charity that mostly pays for hotel rooms for families of sick children treated at Children’s Hospital (CHOP), Wills Eye Hospital and the Hospital of the University of Pennsylvania (HUP). 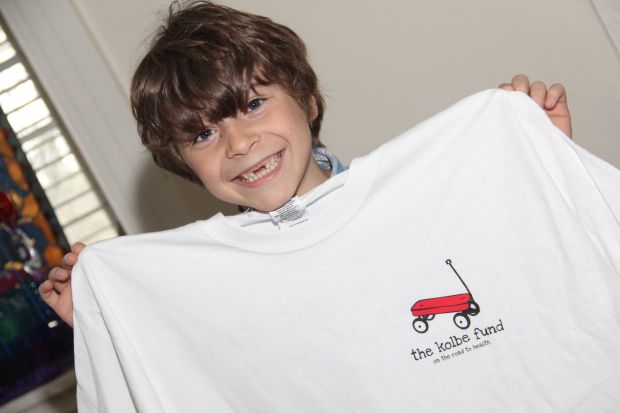 Maximilian Kolbe Shnittman holds a T-shirt promoting the organization that bears his name: The Kolbe Fund.

The Maximilian Kolbe name for their son and the fund bears explanation.

Aaron and Kate are originally from Rochester, N.Y., and married 10 years now. Aaron, who teaches at the Church Farm School in Exton, is Jewish; Kate is Catholic. Because they both believed children should practice a faith, they decided the children would be baptized and raised Catholic, even though the family honors its Jewish heritage too, by celebrating both Jewish and Christian holidays.

Kate was already pregnant with their first child when they relocated to the Philadelphia area, first to Drexel Hill and ultimately Exton. Very early on they decided if their baby was a boy he would be called Max, simply because they liked the name.

“Our brother-in-law introduced us to St. Maximilian Kolbe,” Aaron said. Both Kate and Aaron were intrigued, especially because of the family’s Jewish heritage, and Maximilian Kolbe appealed to them.
St. Maximilian, a Franciscan priest, lost his life in the Auschwitz concentration camp during the Nazi occupation of Poland. He was a voluntary substitute for a fellow slave laborer, a young father who was among 10 men randomly chosen to die by starvation as a reprisal for the escape of other prisoners.

The Schnittmans decided if their first child was a boy, he would be Maximilian Kolbe. By coincidence little Max was born Aug. 14, 2006, the feast day of St. Maximilian Kolbe — but then, are there really such things as coincidences?

“Max is very proud of his name,” Kate said. “We talked to him about St. Maximilian and he has a little statue of him.”

Now Max is 7 and in first grade at SS. Philip and James School; his sister Eleanor, 6, is in kindergarten and youngest sister Cecilia, 4, is not yet in school.

“When Max was 4 we noticed strange behavioral changes,” Kate said. He had exhaustion, depression and was not acting right. After numerous doctor visits the tumor was finally discovered through an MRI.

The tumor was removed at Boston Children’s Hospital, and there have been follow-up visits with additional surgery. At this point, although treatment is ongoing, his parents are optimistic he will enjoy a long, healthy life.

Max was in kindergarten at SS. Philip and James during his first surgery and the children at the school prayed for him every day, as they did for his most recent operation, and they also kept in touch through Skype when he was out of school. The children gathered 100 packets of toiletries the family could take to the Ronald McDonald House.

“Max is a very special little boy,” said Immaculate Heart Sister Helen Thomas McCann, the school’s principal. “He has a wonderful family, very involved with the children and our school. They realize the power of prayer.”

And of course when the family prayed for Max they prayed to St. Maximilian, who Aaron notes, gave his life to preserve a family and for that reason is a patron saint of families.

Once they established the Maximilian Kolbe Fund it took on a life of its own. Kate, who is a stay at home mom caring for the kids, does a great deal of the fundraising work, but she has lots of community support.

Jeannine Kelly, who lives in Drexel Hill, works for the fund part time as the reservations coordinator on call 24/7. She connects directly with the families and the social workers and makes the hotel reservations, when appropriate.

Kelly, who is the mother of a special-needs child, is very connected to the Kolbe Fund mission and was recently named to the Archbishop Prendergast High School Hall of Fame.

Jen O’Donnell, who is the part-time accountant for the fund, lives in Exton and has children at SS. Philip and James School. Ellen Cordes, who is a board member of the fund and one of many volunteers, is another friend from Drexel Hill. She plays a major role in fundraising and program management.

At the outset Aaron and Kate asked what the needs were. They were surprised to discover housing for families was still the most pressing need. Although Ronald McDonald House does wonderful work in this area the need is greater than its capacity.

The Maximilian Kolbe Fund, through its Hopeful Nights Program, has arrangements with several hotels that provide the rooms at a discount rate to the fund. In some cases, depending on need, the fund also provides parking facilities and restaurant cards to the families.

At CHOP, Stephanie Fooks-Parker is one of the social workers who contacts the Kolbe Fund when there is a need for their help. “Housing is a big thing,” she said. “Having a sick child is stress enough and if we can ease that burden it helps.”

It may be the child’s appointment is at 7 a.m. and the only reasonable thing for the family to do is come to Philadelphia the night before, Fooks-Parker explained. Other times, a child’s hospitalization is unexpected and the Kobe Fund fills in for the emergency. Sometimes a parent has had to stop work because the child is sick and can’t afford a hotel.

The process is very simple, as explained by Fooks-Parker. A short form is filled out, Kelly is notified and she does the legwork of arranging the stay with a hotel. Then the hospital and family are notified and that is all there is to do. The Kolbe Fund pays the bill. “They make it very easy for us,” she said.

Matt and Katie Burdick of Elmira, N.Y., are the parents of two small children. The older child, Lyla, 2, was born deaf and although she was fitted for hearing aids, their doctor convinced them she would do much better with cochlear implants. It’s a long drive to Philadelphia and CHOP where the operation is done, and there are expenses, but worth the sacrifice.

So far they’ve made multiple trips to CHOP and there are more to come. Their appointments are accomplished in a day, and although by stretching it one can drive from and back to Elmira in a single day, it is not something you would want to do with a very small child who has just had a medical procedure. A social worker at CHOP put them in touch with the Kolbe Fund.

“We have stayed overnight twice so far, and the help they have given us is fantastic,” Katie said.

She and her husband have never met the Schnittmans, but “I would love to meet them, Katie said. “What they are doing is fantastic.”

Starting in October 2013 through late April 2014 the Kolbe Fund has provided 266 nights of free lodging to 73 families. While the bulk of the families are from Pennsylvania and New Jersey, families from 20 states have been assisted.

The Kolbe fund relies entirely on donations from sympathetic donors either through their website — TheKolbeFund.org — or fundraisers conducted by its supporters and community groups.

With that initial $7,000 donation from friends and sympathizers the Kolbe fund was begun.

“When we said this is what we are doing many people wanted to support us,” Kate said. “Every day there is a donation in the mail. lt is growing; it is exploding, but the need is tremendous. As soon as the money comes in it goes out.” 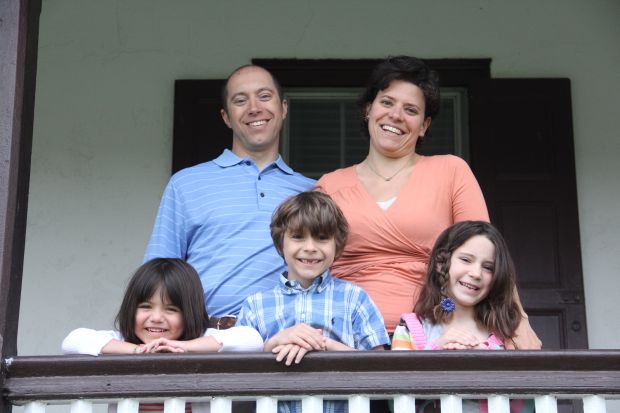 The Schnittman family at their home in Exton, Chester County. (Sarah Webb)

NEXT: Living diversity: How to welcome equals, not just guests