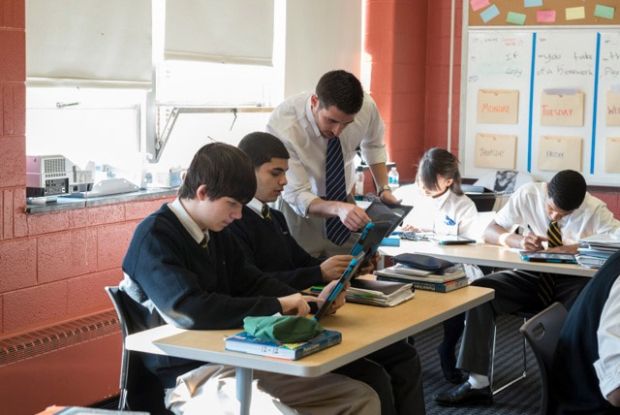 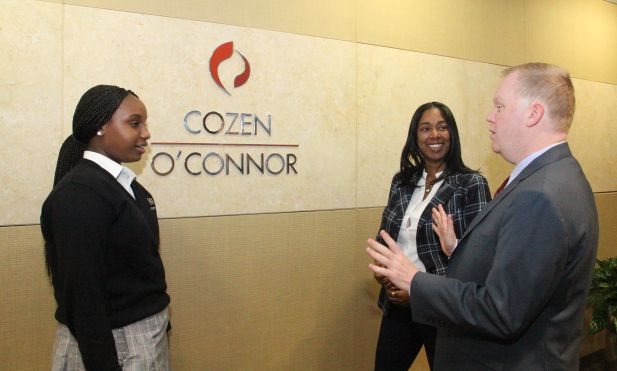 It is almost two years now, and Cristo Rey Philadelphia High School, where at-risk students gain experience and earn tuition through work-study at some of Philadelphia’s best-known companies, is not only surviving it is thriving.

“My high school is preparing me not only for success in college but in my future career,” said sophomore Zaria Jackson. “I work at Cozen O’Connor every Monday and I love every minute. The team at Cozen O’Connor has made my experience there manageable and challenging, all while being by my side to help me grow along the way.

“Cristo Rey Philadelphia is giving me the skills I need to be successful. The teachers and staff care about all of us (students) and are willing to go to any extreme in order to see us succeed.”

“I am pleased that our firm is involved with this terrific organization and can assist in providing such a meaningful opportunity to young people in Philadelphia,” said Managing Partner Vince McGuinness. “I am extremely proud of how our Cozen O’Connor family has adopted and embraced these young men and women. Our Cristo Rey student workers are a complete joy to work with and I look forward to following their continued success in college and beyond.”

Cristo Rey Philadelphia opened in 2012 with a coeducational freshman class in the former elementary school of Our Lady of Hope Parish on North Broad Street. Now as it prepares to open its junior year next fall the call has gone out for 15 new faculty and staff positions.

“We will have somewhere in the neighborhood of 375 students next school year,” said John R. McConnell, the founder and president of Cristo Rey Philadelphia. 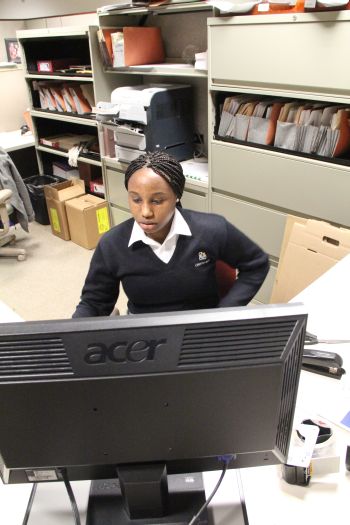 Zaria Jackson uses a computer for her tasks in an office of the law firm. (Sarah Webb)

The independent Catholic high school is one of 26 Cristo Rey schools around the country, with more in the planning stages. Although each is independent, all follow the general formula established in 1996 at Cristo Rey Jesuit High School in Chicago.

In addition to their classroom studies each student spends one day in four working at one of the sponsoring companies, earning approximately $7,500 which is given directly to the school. With this ratio in mind five students are assigned to each position, so the full work week is covered.

Generally over four years a student is expected to work at four separate companies in various fields, although in a few cases companies have requested individual students stay on, McConnell explained.

This covers 60 percent of the actual cost. The rest of the cost is covered by fundraising, grants and a modest tuition based on the family means, ranging at this time from $10 to $200 monthly.

While money earned during the school year goes to Cristo Rey, should a student stay with the company during the summer, and many do, they can keep their earnings for that period.

The per-pupil cost of $12,500 is high, compared to archdiocesan high schools’ average per pupil cost of $7,811, because the Cristo Rey schools are providing a college prep education to students for whom college might otherwise have been an unattainable dream.

“Based on network experience we expect a 30 percent drop off,” McConnell said. “The number one reason kids don’t make it is academics. Our kids bring with them tremendous complicated burdens in their lives. We have kids who have As and Bs in one trimester and all Fs the next. It is not that they suddenly got lazy or suddenly decided they don’t want to go to college, it is something horrendous happening in their home life that makes algebra pretty low on their priority list.”

For those who go the distance in a Cristo Rey school, and that is the majority, college acceptance is 100 percent, according to McConnell.

“That is their reason for being here,” he said, adding students attend colleges ranging from community colleges to the University of Pennsylvania. “I’ll bet we’ve had 20 universities come here already to explain what it is like at their school, why they should be interested and how they can get in. These universities are looking to diversify their student body and they are committed to supporting first-generation college graduates.”

Although it is a Catholic school, 27 percent are registered as Catholic, 26 percent Protestant, and the rest mostly unspecified. 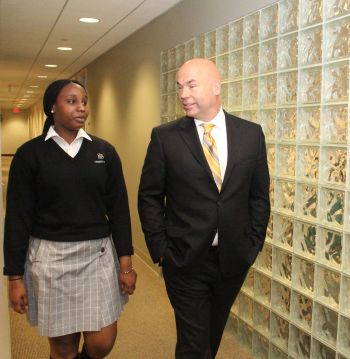 Cristo Rey is indeed a ray of sunlight for these students who might otherwise have a dark future.
***

NEXT: Help on the road to health