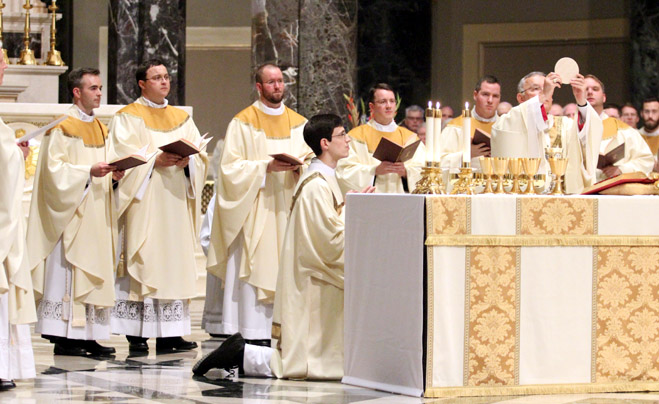 Archbishop Chaput consecrates the Eucharist as the newly ordained priests concelebrate the Mass for the first time May 17 at the Cathedral Basilica of SS. Peter and Paul.

It was a great day for the Archdiocese of Philadelphia on Saturday, May 17 as Archbishop Charles J. Chaput, through the laying on of his hands and prayer, ordained six young graduates of St. Charles Borromeo Seminary as priests for service in the archdiocese.

(See a photo gallery of the ordination, and read more about the new priests and those celebrating their anniversaries of ordination in our Priesthood 2014 section.)

In his homily at the liturgy, Archbishop Chaput gave his new priests one last bit of fatherly instruction.

“The church is first and foremost not a speaking but a listening community,” the archbishop told them. “Your priestly role of speaking will be effective to the degree that you turn to the Lord and listen as he speaks to you.”

You must “listen to the voice of Jesus and turn to him when he speaks to you through the teachings of the church which you are to guard and love, protect and cherish with your whole being.”

A priest, the archbishop explained, “is sent to his parish and represents Christ who is sent to us through his Father.” In this vein, at the conclusion of the liturgy, Archbishop Chaput called each of the newly ordained by name and gave them their new assignments as parochial vicars throughout the archdiocese.

Father Buck, the son of Edward and Janice Buck, served as a transitional deacon at Mary, Mother of the Redeemer Parish in North Wales and now will minister at St. Andrew Parish, Newtown. He celebrated his first Mass on May 18 at SS. Simon and Jude Church, West Chester.

Father English, the son of Paul and Marybeth English, served his deacon year at St. Pius X Parish in Broomall and now will minister at St. Christopher Parish, Philadelphia. He celebrated his first Mass on May 18 at St. Charles Borromeo Church, Drexel Hill.

Father Gross, the son of Joseph and Mary Gross, served his deacon year at Our Lady of Guadalupe Parish in Buckingham and now will minister at Our Lady of Grace Parish, Penndel. He celebrated his first Mass on May 18 at St. Agnes Church, West Chester.

Father Moriconi, the son of E. Steven and Christine Moriconi, served his deacon year at St. Andrew Parish in Newtown and now will minister at St. Eleanor Parish, Collegeville. His first Mass was celebrated May 18 at St. Albert the Great Church, Huntingdon Valley.

Father Ravert, the son of Eleanor Todd, served his deacon year at St. John the Evangelist Parish in Morrisville and now will minister at St. Charles Borromeo Parish, Bensalem. His first Mass was celebrated May 18 at St. John the Baptist Church, Philadelphia.

Father Waters, the son of David and Evelyn Waters, served his deacon year at St Patrick Parish in Norristown and now will minister at St. Pius X Parish, Broomall. His first Mass was celebrated May 18 at Sacred Heart Church, Royersford.

After the ordination liturgy there was ample opportunity for photographs with Archbishop Chaput and family members, and first blessings were given to the many friends who attended the service.

While the newly ordained were clearly thrilled at this final step before they take up their God-given priestly vocation, so were their many relatives.

“It was beautiful,” said Lynn Waters, the mother of Father Waters. “This is a blessing. He is my only child and this is what he always wanted and we fostered it.”

Rheanna McGlensey, the sister of Father English, is herself a CCD teacher, and she feels her brother’s ordination has made this more special for her. “It’s exciting, no words can describe it,” she said.
***

PREVIOUS: Newly ordained priests tell of their journey to priesthood