Father Robert Gross elevates the Eucharist as main celebrant at a Mass May 19 at St. John the Evangelist Church in center city Philadelphia. His newly ordained priest classmates concelebrated the Mass. 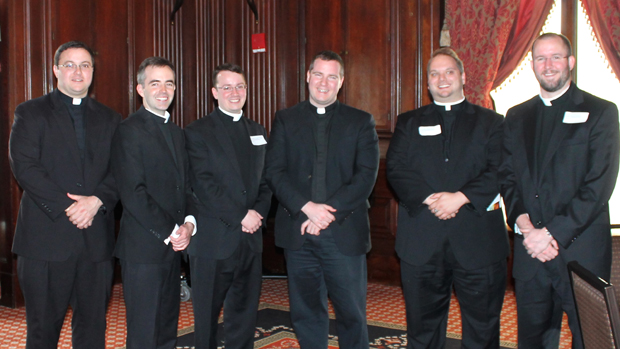 The members of priesthood class of 2014 were the guests of honor at a luncheon sponsored by the Philadelphia area Serra Clubs May 19 at the Union League of Philadelphia.

The Mass and the luncheon that followed at the Union League of Philadelphia were sponsored by the Serra Clubs in the Philadelphia area, and were attended by Serrans, families, other clergy and representative students from 14 area Catholic high schools. The latter were invited because the sole mission of Serra is the promotion of religious vocations.

Principal celebrant of the Mass was Father Gross, joined at the altar by his five companions in mission and other priest friends in the sanctuary.

(Read about their vocation journeys to priesthood in their own words, here.)

Father Gross, in his very short but highly effective homily, chose to focus on specific points of the readings, Acts 14: 12, which tells of the experience of St. Paul and St. Barnabas when they visited Lystra and also the admonition of Jesus in the Gospel of St. John.

“During the last few days a lot of people have come up to us to thank us for our vocation and thank us for responding to the call, telling us they were so proud of us,” Father Gross said. “It is very humbling that everyone has told us these things and it is beautiful in a certain respect, though we kind of feel in a certain way like Paul and Barnabas walking through the streets and everyone praising them and thinking they were gods. 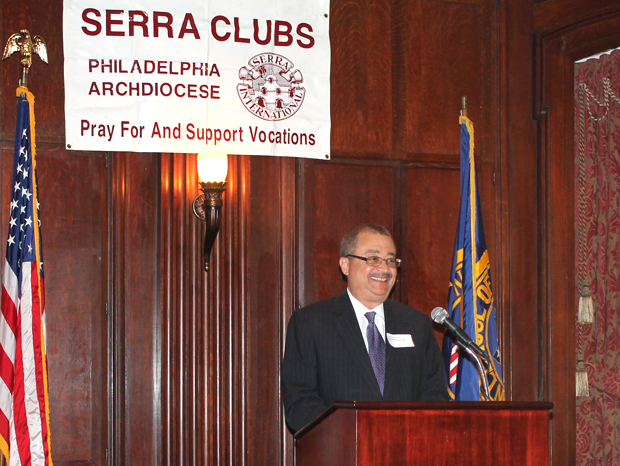 Royal Brown, president of the Philadelphia Serra Club, addresses the guests at the Union League of Philadelphia.

“We are not gods just because we were ordained two days ago and it wasn’t us who chose God,” he said, quoting further from the Gospel of St. John. “Jesus tells the apostles, ‘It is I who am choosing you,’ so please don’t praise us. Praise God for calling us today.”

The master of ceremonies for the event was Royal Brown, president of the Philadelphia Serra Club, who noted the participation of high school students through the sponsorship of the clubs. “Perhaps some of you will have a religious vocation,” he told them.

PREVIOUS: Priestly ordinations mark a day of joy in archdiocese

NEXT: Art reflecting nature grows from vision of Conwell-Egan senior