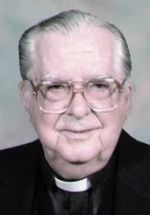 Father Thomas M. Feeney, 94, a high school and seminary educator for most of his career, died May 19.

He was ordained May 22, 1948 by Bishop J. Carroll McCormick at the Cathedral Basilica of SS. Peter and Paul. He attended the Catholic University of America in Washington, D.C., from which he received his doctorate in canon law in 1951.

His assignments include chaplain of the Catholic Home in Marple, and parochial vicar at St. John the Evangelist Parish, Philadelphia.

He served on the faculty of Roman Catholic High School and St. Charles Borromeo Seminary, where he was a professor of Latin and Greek. He also served as assistant rector of St. Joseph in the Hills Retreat House, Malvern. He retired from active ministry in 1995.

Father Feeney is survived by nieces and nephews.