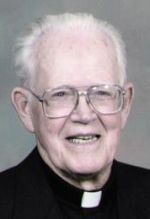 He was ordained May 31, 1947 by Bishop Hugh L. Lamb at the Cathedral of SS. Peter and Paul. His initial assignments were as parochial vicar at All Saints Chapel, St. Clement Parish in Philadelphia and St. Patrick Parish, Kennett Square. He served as an Air Force Chaplain from 1952 to 1980, a period that spanned the Korean War through the Vietnam War.

In 1982 he was appointed pastor of St. Augustine, where he served until his 1995 retirement.

“The people just loved that man,” said Connie Hunt, a long-time St. Augustine parishioner. “He was so humble and gentle. There was nobody I knew that didn’t like him.”

Interment will be at St. Augustine Cemetery, Bridgeport.

NEXT: Bernardine Franciscan sister dies at 77