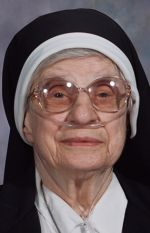 Sister Joella Matt, O.S.F., died May 16 in Assisi House, Aston. She had been a professed member of the Sisters of St. Francis of Philadelphia for 80 years and would have celebrated her 100th birthday in July.

Sister Joella studied nursing at St. Joseph Hospital in Providence, R.I., and became a registered nurse in 1936. She continued working at the hospital during the following year.

She ministered in the Diocese of Allentown for 55 years — all of them at St. Joseph Hospital in Reading. Her work there included service in many areas: medical/surgery supervisor, IV therapist, volunteer in admissions, attendant in the dining room.

Sister Joella also ministered for 22 years in the Archdiocese of Philadelphia at the former St. Mary Hospital in Philadelphia from 1937-1944 as pediatric supervisor and again from 1974-1976 as an IV therapist.

In 2001 she moved to Assisi House in Aston where she served in prayer ministry until her death.

The funeral Mass will be celebrated at 11 a.m. Thursday, May 22 in Assisi House, 610 Red Hill Road in Aston. Burial will be in Our Lady of Angels Cemetery in Aston.

Sister Joella is survived by nieces, nephews and her Franciscan family.

PREVIOUS: Jesuit priest with ties to Phila. dies at 63