Jesuit priest with ties to Phila. dies at 63 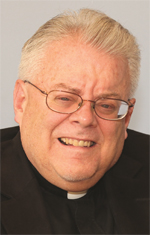 He was born July 26, 1950, son of Michael J. Rock and Frances E. McIntyre, in Detroit, Mich. After moving to the Philadelphia area, he graduated from Cardinal O’Hara High School in Springfield in 1968 and received a Bachelor of Arts degree in modern languages from the University of Scranton in 1972 and a Master of Arts degree in German from Middlebury College in Middlebury, Vt., in 1973.

Father Rock entered the Society of Jesus on Aug. 25, 1978 at the Novitiate of St. Isaac Jogues in Wernersville, Pa., and pronounced his first vows on Aug. 17, 1980. He received a Doctor of Philosophy degree in German from Pennsylvania State University in 1980.

Following his novitiate training, he was sent to pursue philosophical studies at Murray-Weigel Hall, Fordham University, where he received a Master of Arts degree in 1982. As a Jesuit Scholastic, he taught philosophy from 1982 to 1984 at Wheeling Jesuit University before going to Regis College, Toronto, Canada to study theology from 1984 to 1987, where he received a Bachelor of Sacred Theology degree and a Master of Divinity degree.

Father Rock was ordained to the priesthood June 6, 1987 by Baltimore Archbishop William D. Borders at the Cathedral of Mary Our Queen in Baltimore. He continued his theological studies at Jesuitenkolleg, Innsbruck, Austria where he was awarded a Licentiate in Sacred Theology in 1989.

Father Rock’s first assignment as a priest was that of a Minutante (translator) for the Congregation for the Doctrine of the Faith in the Vatican from 1989 to 1995.

On his return to the United States he was given various assignments such as invited professor of theology (1995-1998) and philosophy (1996-1998) at Wheeling Jesuit University; visiting assistant professor of theology (1998-1999) at St. Mary’s University, San Antonio, Texas; campus minister and province director of the Apostleship of Prayer (1999-2000) at Aquinas Institute, Princeton, N.J., and university chaplain (2000-2002) at Gonzaga University, Spokane, Wash.

From 2002 to 2010, Father Rock moved south and served as chaplain at the motherhouse of the Dominican Sisters of St. Cecilia in Nashville, Tenn., attending to the daily spiritual needs of the sisters. In the initial years he was also a professor of philosophy and theology at Aquinas College.

The sisters often recall his homilies at the daily community Mass, brief and to the point, and often sprinkled with stories or quotations from the saints. In preparing the homily for sisters’ funeral Masses, Father Rock would carefully gather personal information and stories to weave into his remarks in such a way as to bring both smiles and tears – and always, comfort.

In his last years at the Motherhouse, Father Rock struggled with Parkinson’s disease.

“Memories abound of his gracious homilies, his generosity to the sisters, his kindness, the movies, the holy cards and the little outings with the sisters in the infirmary,” said a sister who cared for him. “Then one recalls the heroic moments, especially when he said Mass in one sister’s room, very close to the time of her death — while truly he was struggling with his own illness.”

Another sister said, “Father Rock quickly became not only our chaplain, but our friend.  His priesthood and his Jesuit vocation were everything to him. We thank God for his years as our chaplain, for his friendship and for his example.”

Due to failing health Father Rock was assigned to the Jesuit Center, Wernersville and then to St. Claude La Colombiere Jesuit Community in Baltimore. In 2013, he was transferred to Stella Maris care facility in Timonium, Md., where he prayed for the church and the Society of Jesus until his death.