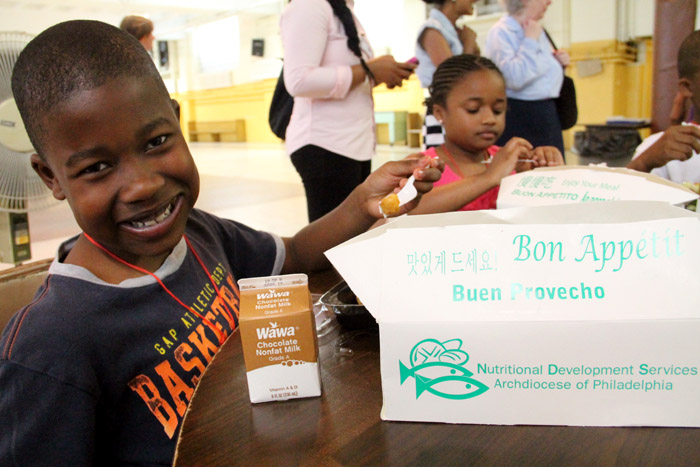 Jeremiah Watson enjoys his lunch at the Blessing of the Summer event June 18 at St. Athanasius School in Philadelphia, part of a federal program operated locally by Nutritional Development Services. (Sarah Webb) 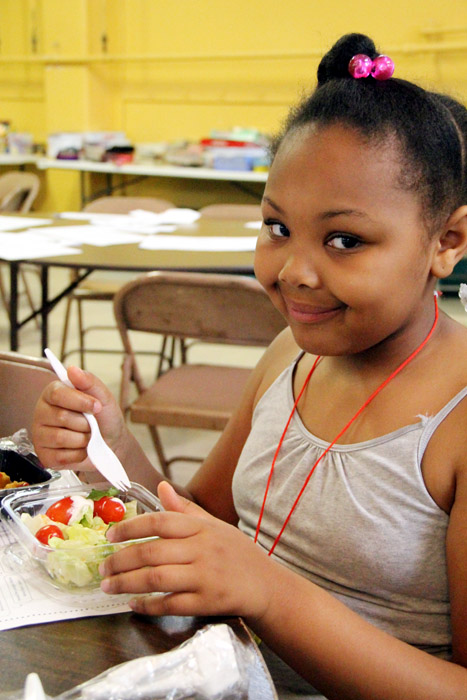 Madison Simpson enjoys the salad that was part of her lunch from NDS.

Lunch consisted of chicken nuggets, cherry tomato and romaine salad, a nectarine and chocolate skim milk at the summer program of St. Athanasius School, Philadelphia, last Wednesday. And yes it was all eaten, including the salad.

You could call it a poster child for successful cooperation between government and non-government organizations, including faith-based organizations.

It’s the U.S. Department of Agriculture’s Summer Meals Program for Children, which is administered statewide by the Pennsylvania Department of Education through local organizations on the community level.

St. Athanasius happens to be one of the more than 400 sites both religious and secular supplied locally by Nutritional Development Services of the Archdiocese of Philadelphia.

The Summer Meals Program, which will run through Aug. 22, was officially kicked off on June 18 with a special blessing by Msgr. Daniel Sullivan who is board chairman for NDS.

(See a photo gallery of the event here, and watch a video here.)

The federal program, which now receives $398 million in funding nationally, has been around since a 1975 pilot program. NDS has been part of it since the very beginning, when teaching religious sisters from parochial schools were volunteering in Philadelphia street programs, according to Anne Ayella, who oversees the program for NDS.

Kids are served at schools, churches, youth groups, play programs, YMCAs and other organizations. This year that includes more than 100 street programs and even three public libraries.

To give an idea of the volume, last summer 820,000 meals were served through NDS. At each site, according to Ayella, the children receive lunch and at the site’s discretion, either breakfast or a snack.

Although the program is technically aimed to assist lower income areas, there are few areas in the Philadelphia vicinity that would not qualify for a feeding site. Under federal guidelines there is no individual income qualification as long as little as half the area population is under 185 percent of the federal poverty level.

At the St. Athanasius site 26 children from the school from ages 5 through 13 were participating, according to Kelly Stroman, who conducts the parish Summer Camp, and the number will increase by half a dozen with the closing of area public schools.

Most of the children participate in school feeding programs during the school year. These programs, also supplied through NDS, are much larger. “We had 165 children this year,” Stroman said.

The summer program really does fill a need, and “everyone is happy we have something like this,” she said.

As part of the program children were also invited to participate in a contest to promote peace in their neighborhood.

Samael Orange, 11 and in seventh grade, thinks the best part of the program is “It helps people out if they need it.” His contribution to peace will be helping people, maybe “taking trash out for them, things like that.”

That’s what it is all about – kids receive nourishment for the body and also food for the spirit.

NEXT: Archbishop Chaput throws a pitch for Catholic Charities