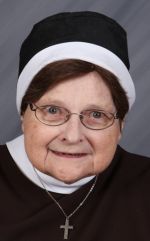 Sister Rayangela Czarnota, 77, of the Bernardine Franciscan Sisters Third Order Regular of St. Francis, died May 20 of natural causes at St. Joseph Hospital in Reading, Pa. She was in her 56th year of religious life.

Born in Chester, she was a daughter of the late Walter M. and Hedwig (Jurkowski) Czarnota.

She served in Delaware and Pennsylvania as an elementary teacher, principal, superior, driver and local minister.