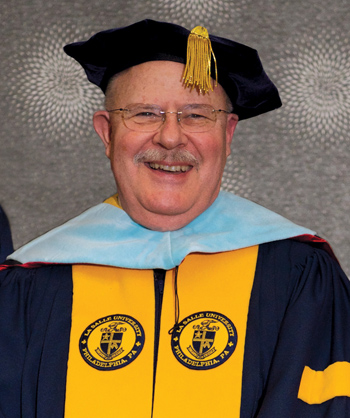 When Brother Michael J. McGinniss, F.S.C., stepped down on May 31 after 15 years as president of La Salle University, turning the reins over to Interim President James P. Gallagher, he left the school in excellent shape as it faces the future.

His own roots really aren’t that far from the campus — he was raised in nearby St. Helena Parish and first encountered the Christian Brothers at La Salle College High School.

“I really liked the brothers I met at La Salle High. I was inspired by them. They seemed to have a strong community life, and it turned out they did,” he recalls.

In 1965, straight out of high school, he joined the brothers and after his postulancy and novitiate in Ammendale, Md., he came back to Philadelphia for his undergraduate studies in English while living at the Christian Brothers’ House of Study in Elkins Park.

After earning his degree in 1970 he was sent to Southwest Catholic High School in Pittsburgh, where he taught English and a bit of religion for four years. This was followed by studies at Notre Dame University where he received his Ph.D. Next stop was the Washington Theological Union in Washington, D.C., where he taught pastoral theology and ecclesiology for five years.

The year 1984, despite the ominous forebodings of novelist George Orwell, was a very good year for Brother Michael. He returned to La Salle and happily taught theology for the next decade. Then in 1994 he was presented with an entirely different challenge when he was asked to go to Memphis, Tennessee to take over the presidency of Christian Brothers University.

One of the subtle changes he introduced was a practice at La Salle instituted by his predecessors, Brother Patrick Ellis, Brother David Burke and Brother Joseph Burke.

“They always taught,” he said, “so I taught different religion classes and that made an impression on the faculty. I taught different classes – the Reformation, Ecumenism in the Christian Churches, Modern Catholicism, technically after 1900.

His period in Memphis was only five years but he did leave his mark. “I think I provided good stability,” he said, which is not to mention the two residence halls built during his tenure, as well as a new science lab and the groundwork laid for what would be a successful capital campaign.

Truthfully, he had mixed emotions when in 1999 he was asked to come home once more to take on the presidency of La Salle.

One of his initiatives was taking a page from Judith Rodin at the University of Pennsylvania, “investing in the neighborhood.” The surrounding area was virtually entirely residential with very little economic activity.

“We developed a supermarket and a shopping center (Shoppes at La Salle) that was a good economic engine for the neighborhood,” Brother Michael said. “We tried to build good neighborhood relations. Our students live in a community but they have different lifestyles, different ages, and there are tensions. We worked very hard on that and I think we had some success.”

Under his watch, the campus expanded from 100 acres to 130 acres, mostly through acquisition of property of Germantown Hospital. When it came on the market, “Truth to be told at first all I could see was old buildings, but I loved the land and we have been making good use of the property,” he said.

Through this purchase a West Campus was created with expanded space for the School of Nursing and Health Sciences. There has been expansion at the Newtown satellite campus and the opening of a Plymouth Meeting campus. There are overseas opportunities in Basel, Switzerland and Prague, Czech Republic.

New programs include an Integrated Science, Business and Technology Department, a business scholars co-op program, a ground-breaking four-year BS/BA program in accounting, doctoral programs in theology and nursing, and as mentioned, the expansion of the School of Nursing.

Fundraising is a major item for any college president, and under Brother Michael $133 million has been raised for various initiatives and the endowment increased by 88 percent to $79.4 million.

This, of course brings up that nasty topic, money. College is expensive, and more so today than ever. Does Brother Michael worry about that?

“I do,” he said. “We give a lot of financial aid, and that’s how we try to ameliorate the cost. If you look at the identified price it is about $40,000 (per year). At the same time the average student pays about two thirds of that.

“I really do believe a Catholic education provides a tremendous amount of value to Catholic families and families that are not Catholic. But cost is a critical thing and we work very hard to keep costs low,” he said. “In recent years our highest increase was four percent.”

One of the ways La Salle has been able to do this is by focusing on financial aid, rather than changes that might make the campus more aesthetically pleasing or amenities driven, Brother Michael said.

Another concern typical of virtually every Catholic school from kindergarten to university is the decline in religious vocations, not only in the United States, but throughout the developed world.

At one point virtually all courses were taught by Christian Brothers at La Salle. Now there are 22 brothers on campus, of which 15 are fully active, Brother Michael estimates. And that number continues to diminish because of age.

Given this reality, how will La Salle continue to be a Catholic university in substance and just not in name?

“It’s a challenge that we have been working on for several years,” Brother Michael said, “but it is a doable challenge.”

As part of this, theology professor Dr. Margaret McGuinness has been appointed vice president for mission management and charged with developing programs to promote awareness by the lay staff and faculty of the Lasallian tradition.

”I think she has done a great job and the thing that is most important  about her is before she took the job as vice president she was already a respected faculty member,” Brother Michael said. “She is a very important person who leads the charge and gets the faculty engaged.”

Of course Brother Michael is still doing his part. One of the honors program classes he has been teaching is a tongue-in-cheek reference to George Bernard Shaw’s sardonic observation, “A Catholic university is a contradiction in terms.” Brother Michael’s course title is “On the Catholic University: an Oxymoron?”

“It is not an oxymoron,” he emphatically declares.

Now after 15 years, he is leaving La Salle in very good shape for his successors. “You know as well as I the person at the top gets the credit, but there are a lot of good people who make it happen,” he said. “I think La Salle has some very good days ahead.”

As for his future days, this next year will be a well-earned sabbatical. Then God willing, it will be back to La Salle to teach and “if there is anything the board wants me to do as president emeritus to help the president, I’ll do it,” he said.

NEXT: Walking life’s journey with the poor