Walking life’s journey with the poor 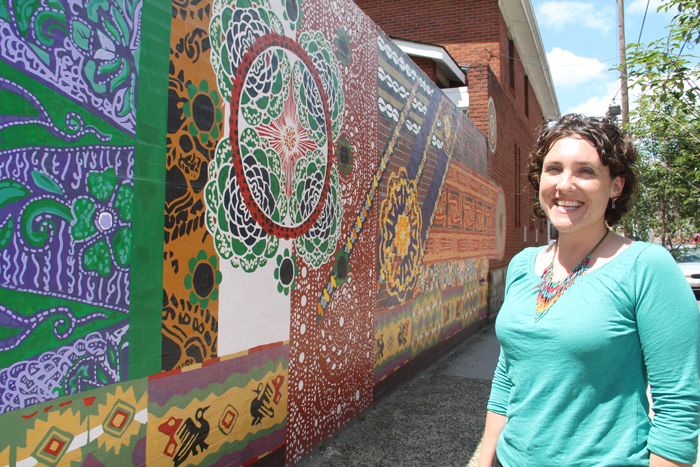 Bethany Welch stands outside the Aquinas Center in South Philadelphia, of which she is the director. A program of St. Thomas Aquinas Parish, the center assists poor residents of the area, including undocumented immigrants, in a variety of ways. (Sarah Webb) 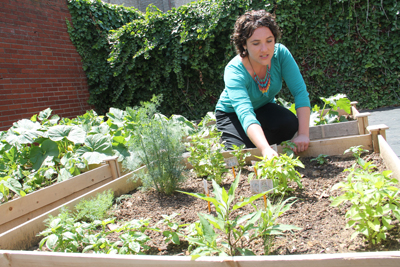 It’s a wonderful thing to give financial support to people who for whatever reason are the less fortunate in society. But as Christians we are also called upon to identify with them and walk with them. Mere money is an important but lesser part.

There are very few people in Philadelphia who understand this and put it into practice as does Bethany Welch, the director of the Aquinas Center in South Philadelphia.

Because of this, she is set to receive the Cardinal Bernardin New Leadership Award, which will be given to her in New Orleans by the Catholic Campaign for Human Development on June 11, during the Spring General Assembly of the United States Conference of Catholic Bishops.

The annual award honors a Catholic between the ages of 18 and 40 who demonstrates leadership in fighting poverty and injustice in the United States through community-based solutions.

Solidarity with the poor and marginalized was not among the core values she learned as a child. Growing up in Rochester, N.Y., as a God-fearing Evangelical Christian, she learned there was a duty to help the poor. But with that said, poverty and ignorance were seen for the most part as the result of life choices. Good people prosper; suffering was associated with sin and bad character.

“I think that is beginning to change,” Welch said. She believes that in all denominations it has to do with the Generation X, its successors Gen Y and the Millennial generations coming to faith through service.

Born on the cusp between Gen Y and the Millennials, those who came of age with the new century, Welch felt this pull. At Roberts Wesleyan, a respected Christian liberal arts college, her major was art with a view toward a career in graphic arts. 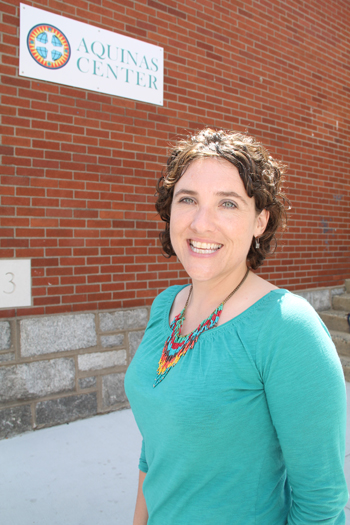 As part of her education she did an internship in her field while working at a hunger relief agency, which helped open her eyes to the true nature of poverty.

During a chance visit to an Episcopal church to view the liturgical artwork, she noticed the stark graphics on a copy of the Catholic Worker newspaper on the pamphlet rack, and hesitantly took it. She had never heard of Dorothy Day before and was profoundly moved by the life of America’s most revered Catholic social activist.

After college in 2003, she signed up for with AmeriCorps VISTA, the domestic equivalent to the Peace Corps, and was sent to Philadelphia to work at the new Cardinal Bevilacqua Center in Kensington.

This is really where her ultimate conversion to Catholicism and dedication to the poor took hold.

Father (now Msgr.) Hugh Shields, then the pastor of nearby Visitation Parish, had a good deal to do with it.

“A lot of my conversion started in the rectory kitchen, with good discussion over coffee, telling stories and sharing meals,” Welch said. After instruction from Msgr. Shields she was received into the Catholic Church during the 2005 Easter Vigil Mass at Visitation Church.

All the time that pull to social ministry remained strong, and in 2009  she returned to Philadelphia to work at Providence House, a North Philadelphia ministry of the Holy Child Sisters, where the work was mostly among poor immigrants, especially Latinos. Much of it was in the context of asylum, migration and immigration, including working with the undocumented.

In 2012, at the invitation of Msgr. Shields who is now pastor of St. Thomas Aquinas Parish in South Philadelphia, she went to St. Thomas to organize what is now the Aquinas Center in the former convent of the parish, and to work among the large immigrant population in that parish.

“Bethany is a gifted young woman,” said Msgr. Shields, who nominated her for the Cardinal Bernardin Award. “I give credit to the Holy Spirit for her conversion. She saw what was good in Catholicism and she has never looked back. She has a tremendous passion for what she is doing. She has great vision but her feet are planted firmly on the ground.”

The work at Aquinas House is similar but also different than that at Providence House. The immigrant population is more varied with a great many Indonesians, but also with Hispanics and Vietnamese.

Part of the problem now is the neighborhood that is relatively close to center city Philadelphia is experiencing gentrification, which affects the poor, who often as not are undocumented and have no civil protection. For example they may be evicted and the house rehabbed for more affluent occupants.

It is Welch’s dream to organize something like Habitat for Humanity where dilapidated houses can be purchased and rehabilitated for poor families by volunteers, perhaps utilizing the talents of some of the immigrants themselves who often have construction skills.

Not every problem has an easy solution but every one that is solved is a victory. Welch cites the case of “Marvin,” who was brought into the country at a young age by his parents. Marvin attended the parish school, was an altar server, volunteer and CYO member.

He wanted to go to Cristo Rey, the high school that combines studies with work at cooperating companies to earn tuition. He could not be enrolled at Cristo Rey for the very simple reason he did not have the legal documents needed to obtain working papers, which are required for work, a mandatory component of Cristo Rey.

Through the legal clinic at Aquinas House the needed paperwork for a two-year stay from deportation was obtained and a donor gave the $465 application fee. Now Marvin can go to school and if necessary in two years apply for another stay, or better yet, by then immigration reform may be enacted to cover such cases.

Quite often Aquinas House provides assistance to immigrant families where the children, even preteens, have had to take leadership roles in the family because their parents have not yet acquired the English language skills they need to navigate the system and solve problems that arise.

Dealing with sometimes heartbreaking situations are an everyday part of the work of outreach programs such as Aquinas House and in spite of the best of intentions many workers in the field quickly burn out.

Faith is an important tool to keep Welch from discouragement. She underwent a two-year Jesuit-sponsored Contemplative Leadership in Action program with continuing follow-up sessions. She also has a spiritual director with whom she meets monthly.

Under her leadership and that of Msgr. Shields and a competent board, Aquinas House has developed sustainable funding sources without relying on government grants, be they federal, state or local, which so many other well-intentioned similar enterprises have accepted but faded away when the grants dried up.

She is definitely committed to the long haul in South Philadelphia and recently bought a house on Tree Street, just a 10-minute walk to the church.

Daily Mass at St. Thomas is part of her routine, with Sunday Masses at Old St. Joseph’s where she is a member of the pastoral council.

“My Sunday worship is at St. Joseph’s because I don’t feel like I’m on the clock there,” she said.

But whether it is at St. Thomas or St. Joseph, Mass is critical to the spiritual health of her ministry.

“The Eucharist sustains us,” she said. “It not only allows us the joy of the eucharistic table, but to see the people’s sufferings through Christ’s suffering.”

PREVIOUS: La Salle president steps down from top post but not from classroom

NEXT: New leader of global Christian Brothers is native Philadelphian