He’s bringing his swing to Boston 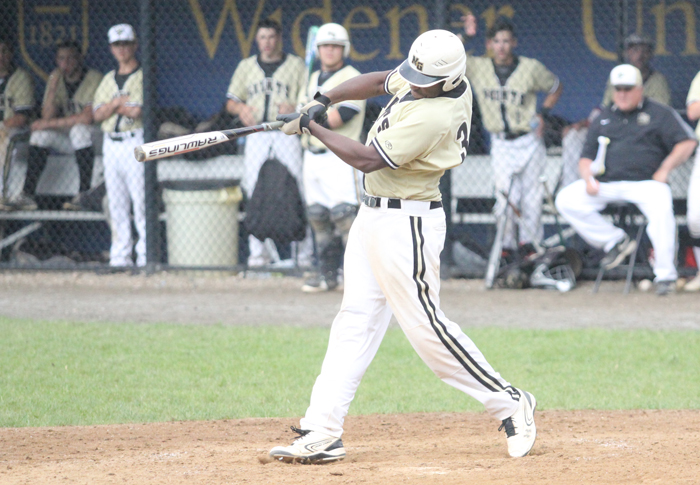 Josh Ockimey will take his powerful swing to Florida and the Gulf Coast League to begin his professional baseball career in the Red Sox organization. (Sarah Webb)

Josh Ockimey led his Neumann-Goretti Saints to Catholic League and District 12 championships this year with a .500 batting average and 34 RBIs. (Sarah Webb)

One of the area’s best players has become one of the Boston Red Sox.

Well, not quite, but sort of.

Neumann-Goretti senior first baseman Josh Ockimey, who led his team to the Catholic League championship, a district title and the state semifinals, was selected by the Boston Red Sox in the fifth round of last week’s Major League Baseball’s first-year player draft.

Ockimey, whose senior season statistics included a staggering .500 batting average and 34 runs batted in, agreed to contract terms with the Red Sox for a reported $450,000 signing bonus.

During his amazing career, Ockimey hit .411 with 13 home runs, 100 runs batted in and 106 runs scored. He will report to the rookie-level Gulf Coast League Red Sox in Fort Myers, Fla.

Meanwhile, the 29th annual Carpenter Cup Classic will run from June 12through June 20, with the final two rounds to be played at Citizens Bank Park on June 19-20. All the other games will be played at Richie Ashburn Field in FDR Park, South Philadelphia.

The Catholic League team, which will meet Tri-Cape County at 4 p.m. on June 14 (rescheduled from an earlier postponement), is comprised of the following players and coaches:

After a riveting season that included meeting in the Catholic League championship, Archbishop Ryan and Lansdale Catholic have both been eliminated in the state tournament.

Ryan, the CL champ that was undefeated in league play, lost to Lower Dauphin, 4-0, in the state quarters.

Lansdale Catholic, thanks to a six-hit effort by Ashley Seal and two runs in the bottom of the seventh, upended Berwick, 2-1, in the quarters before dropping a 4-1 decision to Bethlehem Catholic in the semifinals. The Crusaders’ lone run came courtesy of a home run by Greta Sheridan.