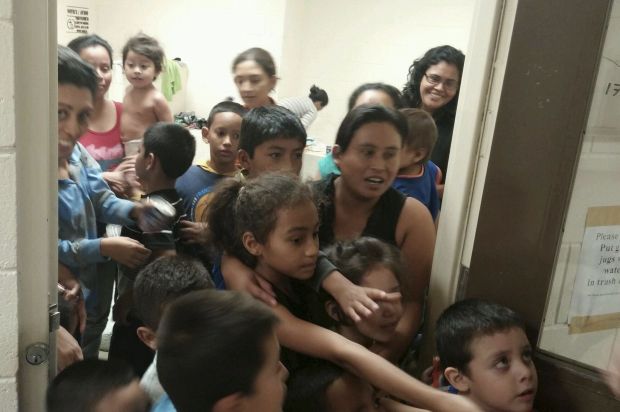 It would be an understatement to say that immigration in the United States is a complex issue. It is often the source of contentious debate and disagreement — not only in Washington, D.C., but across America.

In recent months immigration has become a major news story because of the surge in young children leaving Central America and traveling to the United States. It is estimated that more than 55,000 young people have crossed the American border since October 2013. The Department of Homeland Security has stated that number could reach 90,000 by the end of September and possibly increase to 120,000 next year.

There are several reasons for this exodus from countries in Central America. Gangs, violence and poverty are major issues in Honduras, El Salvador and Guatemala. The risks are great, but parents are paying smugglers called “polleros” (which means chicken farmer) to take their children to the United States.

The influx of undocumented immigrants has created a humanitarian crisis along the southern American border and has overwhelmed the Department of Health and Human Services. In addition to the 100 permanent shelters along the United States-Mexico border, three temporary shelters have been set up on military bases in California, Oklahoma and Arizona.

Several Catholic organizations, including Catholic Charities, Catholic Relief Services, and the U.S. Catholic Conference of Bishop’s department of Migration and Refugee Services have been providing assistance to the Central American children.

“This humanitarian emergency requires, as a first urgent measure, these children be welcomed and protected,” Pope Francis said in response to the crisis. “These measures, however, will not be sufficient, unless they are accompanied by policies that inform people about the dangers of such a journey and, above all, that promote development in their countries of origin.” 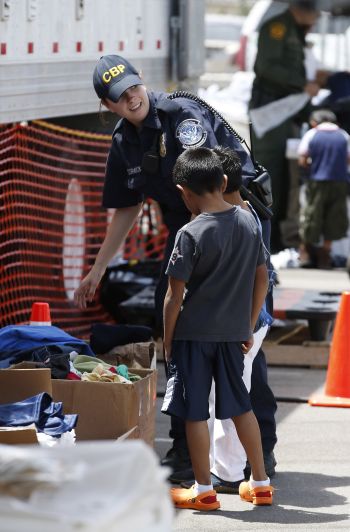 In a letter to the U.S. Congress, Mercy Sister Pat McDermott, president of the Sisters of Mercy of the Americas, said the order is “deeply troubled that thousands of Central American children are forced to flee their home countries because of out-of-control violence in the region. Furthermore, we are disturbed by the reaction that some Members of Congress have had to this humanitarian crisis.”

The letter added that the sisters of Mercy “recommend that Congress does not react by further fortifying the border. Instead we call on Congress to conduct a full analysis of the root causes of this humanitarian crisis and how U.S. foreign aid, U.S. trade policy and the war on drugs are impacting the region. This assessment must include the perspectives of NGOs, faith groups and community leaders.”

While this crisis is primarily affecting California, Arizona and Texas, those who work with immigrants in the Archdiocese of Philadelphia shared their perspectives on the immigration crisis at the American border.

Mercy Sister Anna Marie Lesutis, who has been a parish nurse for 15 years and currently serves at St. Helena Parish in Philadelphia, said it is important for people to understand why these children are coming to the United States.

“I see these children as refugees,” Sister Anna Marie said. “Given the level of violence the people are experiencing, these parents are desperate to send their children someplace where they are able to live a normal life.”

However, she said some people have questioned why parents in Central America would send their children on such a dangerous and costly journey to the United States.

In addition to learning more about the immigration crisis, she also suggested that Catholics in the archdiocese send donations to Catholic Relief Services, Catholic Charities or religious communities that provide aid to immigrants such as the Sisters of Mercy, Sisters of St. Joseph and Sisters of St. Francis of Philadelphia.

Matt Davis, director of the archdiocesan Office for Pastoral Care of Migrants and Refugees, said one solution to the crisis is to view these children as refugees or people seeking asylum due to the prevalence of gangs and violence in their country.

Davis, who recently attended the National Migration Conference in Washington, sponsored by the United States Conference of Catholic Bishops, said Bishop Mark J. Seitz of El Paso, Texas, told participants that Honduras has the highest murder rate in the world with Guatemala and El Salvador ranked fourth and fifth.

“That’s where all these kids are coming from,” Davis said. “Parents make a calculated risk: As dangerous as it is to send my kid on a train somewhere, or have them go unaccompanied to the United States, it’s even more dangerous to have them stay here. Unfortunately, these are the kinds of options people are facing.”

He offered other possible solutions for easing the flow of undocumented immigrants from Central America. One option is to add staff to the U.S. embassies where residents in Honduras, Guatemala and El Salvador can make a refugee claim instead of crossing borders to do so.

Another way to help these countries is increasing economic activity and helping people find jobs. “Young guys with no job and nothing to do start making bad choices,” Davis said. Attendees at the conference suggested “we have to start getting people jobs down there,” he said. “CRS (Catholic Relief Services) has some job programs down there already.” 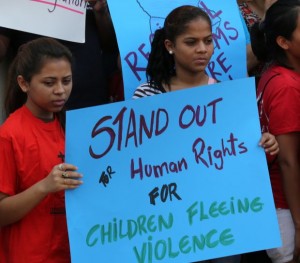 Immigrant families and immigration reform activists hold signs of protest during a July 7 news conference in Washington near the White House. Several speakers at the event urged the Obama administration to provide relief for all children and their families who have crossed the U.S. border illegally to flee violence in Central America. (CNS photo/Chaz Muth)

To address the drug trafficking and gang violence, Davis said a multinational approach is needed. “The gangs have members in the United States,” he explained. “It is sad that some people endured civil wars in Central America and fled to the United States because of the wars and came here when they were kids. They learned that gang culture here and then were deported back to their countries and brought that with them. It is a complex situation.”

In the meantime, Davis said discussions at the National Migration Conference focused on giving Central American children the opportunity to apply for asylum.

Speakers at the conference recommended the children “have due process protection which means the right to a lawyer, and if they’re fleeing violence, there is an international right of protection for them,” he said. “If the state can’t protect you from violence occurring in the state, you may have an asylum claim. A lot of people, including (President) Obama, are saying just to send them all back right away.”

Davis cited Honduras as an example of a country from which the migrant children could seek asylum.

“Honduras had a coup four years ago and it’s a failed state, so people might have some legal recourse if they’re threatened with being killed,” he said. “The government can’t protect them. That could be an asylum claim. If you send them back right away, they never have a chance to make that claim.”

However, Mark Shea, administrator of the archdiocese’s Immigration Services, noted that those who apply for asylum must meet one of five criteria. He noted they must be victims of persecution along the lines of race, religion, nationality, membership in a particular social group or political opinion. Shea said only the fourth option, membership in a particular social group, applies to the current influx which has been spurred by gang violence.

“Appellate case law hasn’t been positive in terms of granting asylum based on gang violence,” Shea said. “I think it is a real stretch to suggest that all these kids are going to be granted asylum because of the gang violence.”

Last week President Obama met with leaders from El Salvador, Honduras and Guatemala and conceded that many of the Central American children would not qualify as refugees.

The Obama administration is considering setting up a screening center in Honduras where it would be determined if the children qualify for refugee status.

“They will need to prove they have been a victim of past persecution or have a reasonable fear of future persecution,” Shea said. “It’ll be interesting to see what happens down there. In my opinion, if they determine these kids are refugees, then it provides an argument for us here in the United States who have kids in deportation proceedings that they are also eligible for asylum.”

Political action on immigration will probably not happen with the House and Senate adjourning for summer recess on July 31, Shea said.

“From my point of view, it’s largely going to be up to what the president does in September because I don’t think Congress is going to do anything this week,” he added. “The president has stated that if nothing is done by September, he is likely going to come forward with something similar to what he did in the past with the DACA (Deferred Action for Childhood Arrivals) program he instituted that took the threat of deportation away.”

According to the U.S. Department of Homeland Security website, the criteria for DACA included those who were under the age of 31 as of June 15, 2012; arrived in the United States before their 16th birthday; are current students; are high school graduates or those who completed a general education development (GED) certificate; are an honorably discharged veteran of the Coast Guard or armed forces of the United States; and have not been convicted of a felony, significant misdemeanor, three or more other misdemeanors, and do not otherwise pose a threat to national security or public safety.

Given the contentious political environment in Washington, Shea said, “it will be interesting to see where the president goes with it (immigration) and how the Republicans respond.”