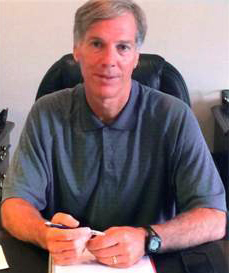 The Office of Catholic Education (OCE) and Faith in the Future made the announcements July 28 for the appointments that became effective July 1.

“These appointments come at a pivotal time for the Neumann-Goretti school community and Catholic secondary education in South Philadelphia,” said Christopher Mominey, Faith in the Future’s chief operating officer and the archdiocese’s secretary for Catholic education. “Bruce is a proven leader with a great track record of success. We believe he will be an asset to Neumann-Goretti as we build a strategy for growth and innovation in the years to come. John is a natural fit for the newly created and unique position of executive director of alumni relations. He is eager to take on the responsibility with great zeal.”

Robinson joins Neumann-Goretti after extensive work as a business executive. For the last two years he was chief executive officer and president of Golfview Advisors in Ardmore, where he provided financial and operating consulting services for real estate and business investment funds. Previously he was CEO and president of the Balfour Beatty Capital Group in Newtown Square.

Murawski has led the Neumann-Goretti school community for the last five years as president. He is a graduate of St. John Neumann High School for Boys, class of 1996. In his new role he will reach out to fellow alumni and business leaders in support of the students and school.