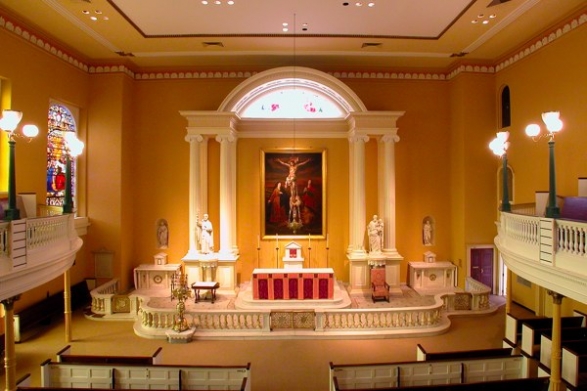 The interior of Old St. Joseph's Church (Photo by B. Krist for Visit Philadelphia) 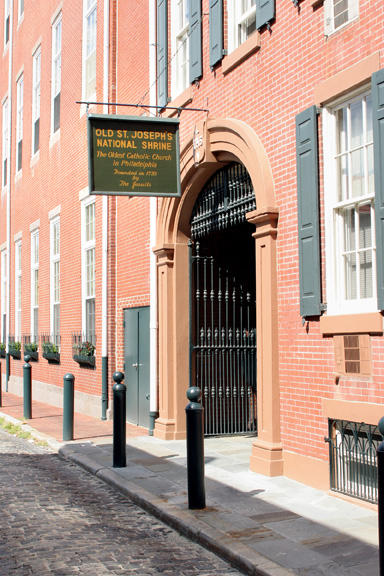 The blue and gold two-sided marker, which will be mounted on a pole near the corner of Walnut and Fourth Streets, will read, “OLD ST. JOSEPH’S ROMAN CATHOLIC CHURCH: In 1729, Rev. Joseph Greaton, S.J., established the first foundation of Catholicism in Pa. He was the church’s first pastor and the only Catholic priest in Philadelphia when the church was built in 1733. Jesuits from this parish founded the early frontier missions in Conewago in Adams County and Goshenhoppen in Berks County, as well as the first Catholic churches in New Jersey and Delaware.”

By explanation, while the above places predate Old St. Joseph’s as Catholic worship sites as does what is now St. Thomas the Apostle, Glen Mills (Ivy Mills), Old St. Joseph’s is considered the first to actually construct a church.

Because of the prejudices of the time, it was small and unobtrusively placed off a main street on Willings Alley, where it was rebuilt and enlarged several times and where it still stands under the care of the Jesuit Fathers.

The State-sanctioned marker program has been around since 1946, and over the years approximately 2,000 markers have been placed at various sites of historic interest.

Local historian Celeste Morello, who helped the parish through the process, has assisted approximately 40 civic or religious groups to obtain the necessary authorization from PHMC. It doesn’t involve just filling out a form. First extensive research must be done to show the site does have a significant history worthy of a marker.

“Only about 25 percent of the applications submitted receive the authorization,” she noted.

It’s not just buildings or building sites that receive recognition by state-sanctioned markers. Two notable Catholic individuals will be honored by markers in the near future.

Revolutionary War naval hero Commodore John Barry will have a marker dedicated to him near the Delaware River at Columbus Boulevard and Spruce Street on Sept. 3. Barry is already honored by a statue in Independence Square, but this marker will be close to the river, his base of operation, Morello explained.

Mathew Carey, a Federalist-era printer of many items including both the King James and Douay-Rheims bibles, and an active civic leader, will have a marker dedicated to him at 324 Market Street on Sept. 14. The location is in the area of what was once Philadelphia’s thriving printing and publishing district.