Brother to preach at funeral for late Msgr. Daniel A. Murray 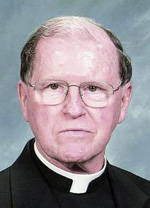 Born in Philadelphia, the son of the late Daniel and the late Kathleen (Hoban) Murray, he attended St. Barbara School, St. Rose of Lima School and St. Thomas More High School, all in Philadelphia, before entering St. Charles Borromeo Seminary.

He also studied at the Gregorian University and the North American College in Rome and was ordained July 12, 1964 by Bishop Filippo Pocci at the Church of Dodici, Rome. On June 8 of this year, Msgr. Murray celebrated a 50th anniversary Mass at St. Rose of Lima with his family and many friends.

Msgr. Murray’s early assignments were faculty at Cardinal O’Hara High School and parochial vicar at Nativity B.V.M. Parish, Media. He served on the faculty of St. Charles Borromeo Seminary from 1970 to 1988, and as rector from 1988 to 1994.

“He was a great scholar and loved to teach,” said his brother, Father Kevin Murray. “He loved the Scriptures and the study of Scripture. The expression ‘My soul is made strong by the meat of Scripture’ typifies him.”

Father Kevin Murray was taught by his brother at St. Charles, where “he certainly nourished my vocation,” he remembers. “He was a great mentor and was always aware the priesthood is no self call, it is uncompromising loyalty to God and his truth. He quoted that at my ordination Mass.”

His career as a teacher followed through in the parishes. Helen Diebold, a secretary at St. Rose, recalls he would go to the school and teach a class, and was also active with the PREP program and training the altar servers.

“He was a shepherd to his people and very religious; a caring person who would visit the sick when he was aware of it, and when you knew him he had some very funny quips,” Diebold said.

Msgr. Murray is also survived by his sister, Sister Maureen Murray, R.S.M., his brother Martin and nieces and nephews.