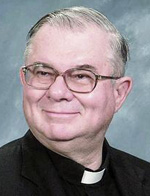 Ordained May 16, 1970, his first assignment was as parochial vicar at St. Joseph the Worker Parish, Fallsington. He also served at St. Eleanor, Collegeville, and at St. Barnabas, St. Jerome and St. Matthew, all in Philadelphia.

His last assignment before his 2010 retirement was as parochial vicar at Corpus Christi Parish, Lansdale.

Msgr. Charles Hagan, pastor of Our Lady of Mount Carmel Parish in Doylestown, was a lifelong friend of Father McLaughlin beginning first when they were boys at Holy Child School and later at St. Charles Seminary.

“Jim loved trains and he would come to my house just to watch the trains go by,” Msgr. Hagan said. “Later when I was studying in Rome, he would go to visit my mother. He also loved boats and at his 70th birthday many of his friends gave him model boats.

“He was a wonderful priest and he loved his priesthood,” Msgr. Hagan recalls, “and more recently in failing health he bore his illness in the spirit of the suffering Christ.”

Father McLaughlin is survived by his sister, Eileen O’Rourke; his brothers Dennis and Thomas; and nieces, nephews and grandnieces and grandnephews.

PREVIOUS: Brother to preach at funeral for late Msgr. Daniel A. Murray