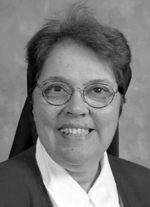 Sister Rita Louise Guerrieri died June 24 in Camilla Hall, Immaculata, in the 54th year of her religious life. She was 71 years old.

Born in Philadelphia, Sister Rita entered the Congregation of the Sisters, Servants of the Immaculate Heart of Mary in 1960 from Our Lady of Angels Parish, Philadelphia, and professed her vows in 1963.

She spent her entire religious life serving the people of the Archdiocese of Philadelphia. She was the principal of various schools for more than 25 years. For most of this time she was also the superior of the local convent.

In 2012 Sister Rita was assigned to SS. Philip and James Parish in Exton. She was the superior of the convent and assisted in the Parish Religious Education Program (PREP).

The presence at her funeral Mass of so many priests from the schools in which she served was evidence of her commitment to Catholic education.

Sister Rita is survived by members of her religious community, a brother, Dennis Guerrieri (Bunny), and a sister, Gloria DeGirolamo.

Also she is survived by nieces, nephews and grandnephews and her loyal community at SS. Philip and James Convent, Exton, and her many dear I.H.M. friends. She was predeceased by her parents, Anthony and Mary.