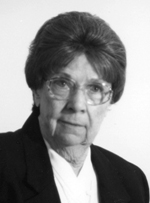 Born in Ashland, Pa., Sister Joanna entered the Congregation of the Sisters, Servants of the Immaculate Heart of Mary in 1934 from St. Joseph Parish, Ashland, and professed her vows in 1937. She graduated from Immaculata University in 1934.

She had the distinction of being the oldest living alumna of Immaculata.

Sister Joanna spent most of her religious life teaching and serving as principal in high schools in the Archdioceses of Philadelphia and Miami, and the Diocese of Arlington. In later years she served as superior of the order’s communities of Gillet Hall, Immaculata, and Epiphany in Florida. She resided for many years at the Immaculate Heart Faculty House in Harrisburg, Pa.

She retired to Camilla Hall in August 2005.

The funeral Mass was celebrated at Camilla Hall June 12.

Father David A. Driesch, O.Praem., was the celebrant and homilist. Sister Joanna is survived by members of her religious community and her brother, John, and many nieces, nephews, grandnieces and grandnephews.

She was predeceased by her parents, John and Ann Connor Pepper, siblings Raymond Pepper, Mary Pepper, Anna May Cummings and Margaret Hurwitz.