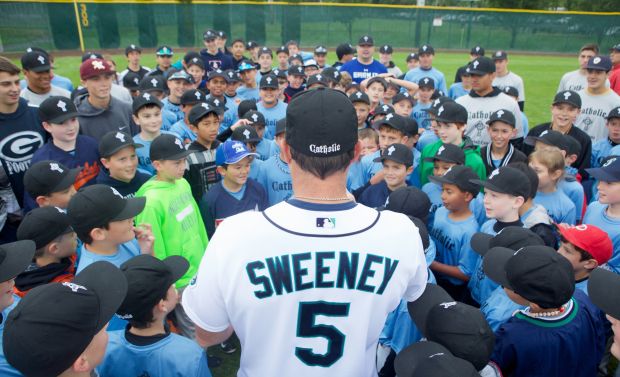 KENT, Wash. (CNS) — After Anthony Adams received a baseball-bead rosary at Mike Sweeney Catholic Baseball Camp, he posted a photo of it on Instagram. “Like it if you love God and you like my baseball rosary,” the 12-year-old wrote.

“It was very bold of him,” said his mother, Silvia Adams of St. Anthony Parish in Renton. “I think Mike Sweeney has helped him to realize it’s good and it’s cool to love God, to just be outspoken about your faith.”

Using baseball to help boys and girls grow in faith and love of Jesus is the mission of the camp created by Sweeney, a longtime Kansas City Royals player who was a Seattle Mariner in 2009 and 2010.

“This is something that God put in my heart to lead,” Sweeney, an energetic father of five, told 152 campers and their parents at Russell Road Sports Complex in Kent. “I do this because I love you kids. I love the Lord, and it’s my way to give back.”

Sweeney said he isn’t paid for the camps: “Our inheritance is in heaven and that’s what we want to show these kids.”

He has held his Catholic camps in San Diego and the Kansas City suburb of Shawnee, Kansas, but this was the first time the camp came to the Seattle area. It drew kids ages 8 to 16 from 48 cities around the Seattle Archdiocese, as well as British Columbia, Oregon and California. Twenty-five kids with parents deployed from Joint Base Lewis-McChord near Lakewood, Washington, attended the July 22-24 camp for free.

Each day of the camp began with Mass, followed by work on baseball skills led by 16 former major league players and coaches who donated their time. Faith was integrated into the day through guest speakers with inspirational stories, Sweeney’s enthusiastic talks about the Scriptures, time for praying the rosary and the opportunity to receive the sacrament of reconciliation. 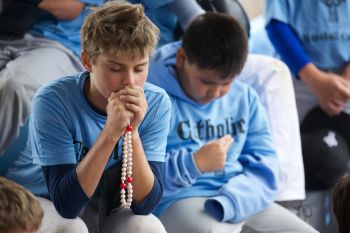 “It’s really cool,” said Max Rooney, 10, of Sammamish, who was named “saint of the day” for his positive attitude and effort on the first day of camp. “Max eats, lives, sleeps, breathes baseball,” said his dad, Brian Rooney, who teaches confirmation class at their parish, St. Monica on Mercer Island.

“He’s been on a cloud,” Brian told Northwest Catholic, the magazine of the Seattle Archdiocese.

On the second day of camp, the clouds opened up and drenched the campers with record July rainfall, but they kept a positive attitude. The next day, they were thrilled by a visit from Seattle Mariners pitching ace Felix Hernandez. Whatever the low or high of the day, the kids heard a consistent message: Make Jesus the center of your life and you’ll find true joy.

“You can love baseball and you can love Jesus at the same time. You can play hard and still be a good person,” said Father Burke Masters, who shared his story of becoming Catholic and playing college baseball before answering the call to the priesthood. Now he is vocation director for the Diocese of Joliet, Illinois.

On the last day of camp, to the kids’ chants of “Father, Father,” and stomping feet on the metal bleachers, Father Masters showed them he can still swing the bat pretty well.

While the kids were the official camp participants, their families were encouraged to stay and attend Mass, watch the drills and listen to the speakers. Several parents said the camp had an impact on them as well as their sons.

“The men speaking have had some really great stories and experiences,” said Marty Reese of Immaculate Heart of Mary Parish in Sedro-Woolley, whose 10-year-old son, William, was a camper. Reese found it inspiring to hear how faith kept these men steady as they worked through tough times. “It’s nice to get that recharge,” the Mount Vernon resident said. 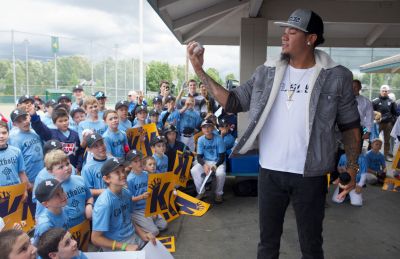 The kids gave a thumbs-up to the baseball experience, and though they didn’t gush about the faith part of the camp, many went to confession the first day and seemed engrossed by the way Sweeney turned baseball stories into faith lessons. “I really like that the archbishop came for Mass,” said Ezra Ho, 14, of Olympia, whose father is in the Army and attends Mass at JBLM’s Main Post Chapel.

Archbishop J. Peter Sartain of Seattle said Mass to start the camp’s second day, telling campers that the concept of every baseball player having a role that’s important to the team reflects St. Paul’s teaching about the body of Christ. “Whatever God calls each of us to do is an important part of bringing the church together and making the church work,” the archbishop said.

The idea for bringing Sweeney’s camp to Seattle began with Forrest Fielder and Tom Ritter, two dads who took their sons to the San Diego camp last year. Once Sweeney agreed to come to Seattle, the dads turned first to the archdiocese’s CYO office for assistance.

Pulling off the camp required the effort of at least 50 volunteers and the help of major sponsors, including the Seattle Mariners, which donated 450 game tickets and 200 baseballs, Fielder said.

On the last day of camp, Fielder said he was “ecstatic” about the experience they were all able to give the kids. “I see their faces and this is what I envisioned.”

Parietti is a contributing editor for Northwest Catholic, the magazine of the Seattle Archdiocese, and local news editor for the website NWCatholic.org.

NEXT: Taney Dragons lose a game, but everybody wins