Taney Dragons lose a game, but everybody wins 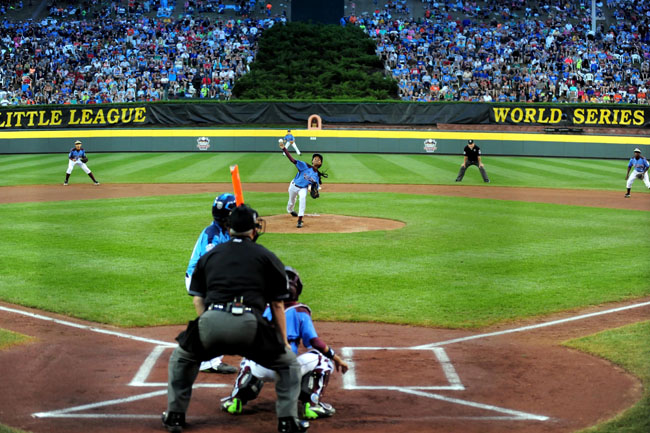 Mo'Ne Davis pitches for Philadelphia's Taney Dragons, the Mid-Atlantic Region representative, in the Little League World Series at Williamsport, Pa., during an Aug. 20 loss to West Region representative Nevada. West Philadelphia's Tai Shanahan hit the ball in play that led to a comeback win Aug. 17 and pushed Taney into the semifinal round of the tournament, from which they were eliminated Aug. 21. (Photo by Evan Habeeb-USA TODAY Sports)

No matter how young or old, if you are a baseball player, there is one situation that occasionally floats through your mind as a tantalizing proposition.

You are up to bat with two outs and two strikes and the winning run on base. The game hangs in the balance. How would you do? What would you do?

For Tai Shanahan, that moment came last week on a stage that, for a 12-year-old, was totally surreal.

When the Taney Dragons, the much beloved and locally adopted Little League baseball team from Philadelphia that captured the hearts of the region in the Little League World Series in Williamsport, battled back from a 6-3 deficit against a very formidable opponent from Texas in what amounted to the American component’s quarterfinal round (there are eight American finalists and eight international finalists), Tai Shanahan was the man of the hour.

The winning run was on third base. Extra innings beckoned. And in Little League, the problem with extra innings is that it forces coaches to tax the bullpen with pitch counts that have potentially serious ramifications on the rest of the tournament.

But with Shanahan up to bat, the Dragons did not have to worry.

Casting aside the major ramifications of a missed opportunity, Shanahan slugged a hard grounder to the shortstop. The Texas youngster made a nice play on a hop, but his throw to first base sailed well off the mark. With Shanahan safe at first, Taney star Zion Spearman, who had tripled in the tying run, crossed the plate with the clinching tally, and the Dragons lived another day.

Unfortunately, the Dragons’ season came to an end Thursday night in the double-elimination tournament, a 6-5 loss to an inner-city squad from Chicago.

But for Tai Shanahan, a budding seventh grader and altar server at St. Francis de Sales Parish and School in West Philadelphia, his winning smash to shortstop was a moment that he will never, ever, ever forget.

“Tai isn’t one of the top players,” said Pat Shanahan, Tai’s father. “But it didn’t seem to matter. That situation was so intense. There’s no other way to put it. It was a huge crowd (estimated at 35,000 by game officials). It felt like a Phillies playoff game.

“He was facing a very good pitcher and had two strikes on him. So for Tai to put the ball in play, especially with two strikes, he did a heckuva job.

“But in baseball, the key thing when you’re batting is to somehow put the ball in play because good things can happen.”

For the past several weeks, much good has indeed come for the Taney Dragons, who became the first team from Philadelphia to reach the granddaddy of Little League baseball.

Different players, including standout pitcher Mo’ne Davis, the first American female player in 10 years to compete in the World Series, have contributed to a marvelous stretch that included district, sectional, state and Mid-Atlantic regional championships.

For Tai Shanahan and his teammates, Taney’s diversity — both in ethnicity and athletic talent — is a mirror image of his school and parish.

“Just like Taney’s baseball team, we have lots of diversity at St. Francis de Sales,” said assistant principal Sister Jane McFadden, I.H.M. “We have lots of student immigrants. We have about 47 nations represented.”

Sister Jane said that although school classes have yet to begin, one could not help but notice how society was tickled by Taney’s success.

“The entire experience has been great,” said Quen, who is on St. Francis de Sales’ school board. “It’s a great story. People have been excited about it. We are very blessed to have had this happen.”

Tai Shanahan, like his 15-year-old brother Liam, started playing tee-ball when he was 6 years old. He immediately loved the sport and, usually competing in the outfield, continued to improve.

When he started playing for Taney, little did he or his teammates realize what would await them in the summer of 2014.

“It is really amazing when you think about how much they had to do to even get to this point,” said the aforementioned Pat Shanahan, a business teacher (and tennis coach) at Roman Catholic High School for the past 25 years and a 1980 graduate of St. John Neumann High School. “They had to get through four different rounds. The competition was very strong. A lot of good teams are unable to win on that level.”

Taney blitzed through districts, sectionals, states and then regionals with few serious scares. Once they got to the Little League World Series, they enjoyed, in many ways, a no-lose situation.

But as the wins mounted these past few weeks, the entire Philadelphia region took notice.

Perhaps aided by the collapse of the moribund Philadelphia Phillies, frustrated baseball fans set their watches — and remote control aim — on watching Taney ascend the ladder.

In the not-too-distant future, Taney’s losing the past two games really won’t matter. As Shanahan’s parents attested, the Taney youngsters experienced something that 99 percent of athletes never do.

They were in arguably the most extreme spotlight possible — their every nuance being televised and analyzed on globally recognized ESPN. Yet they somehow seemed oblivious to the peripheral enormity.

“They are a wonderful group of kids,” Quen said. “There was a lot of sacrifice on many people’s part. That was not lost on them. The players. The coaches. The parents. Relatives. Everyone came together, and that is what is the best part of all this.”

Tai Shanahan was not interviewed for this article. When a person that young experiences such a disappointment — coming within two victories of playing in the World Series championship against the international survivor — talking to the media about the experience is not the first thing he or she would like to do.

However, during the week, Tai Shanahan will be asked to provide his memories. A follow-up to this story will appear next week on CatholicPhilly.com.

“It’s not just the memories, but it is the friendships that have developed,” said Pat Shanahan. “These are moments that will last a lifetime.”

NEXT: Taney Dragons’ glory days end with parade and party with Phillies