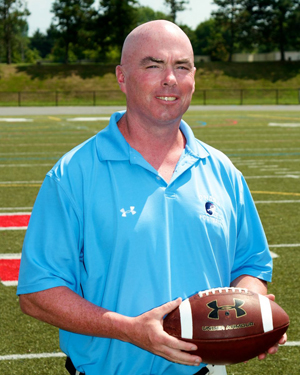 At the end of every August, high school football reporters contact coaches and ask questions that are difficult — and sometimes impossible — to answer.

It is one thing for a coach to answer these inquiries once. However, when you coach at a suburban school, a handful of newspapers plan coverage. Therefore, numerous sportswriters will be seeking the same information.

Even the most experienced and gentlemanly of coaches become tired of the redundancy, and their growing annoyance occasionally becomes apparent in their curt, exasperated responses.

When you would call or text Danny Algeo about Cardinal O’Hara football, you came to expect nothing less than his full attention. More than that, he downright reveled in maintaining a heartfelt discussion about his beloved Lions.

Off the record, when a form of trust had been established, Danny Algeo would divulge pending problems, but never at the expense of any of his players or coaches. He would admit when chances of winning a championship looked grim on paper, but that never curtailed his enthusiasm.

“I can tell you this much,” he said two weeks before this past season got underway, “we won’t go down without doing everything we can to keep getting better and hoping that translates into wins.”

And at the end of every conversation, Danny Algeo would always remember to thank you for contacting him. Genuinely thank you.

That is what the world lost when Danny Algeo died on July 3 from complications that stemmed from a massive heart attack several days earlier.

At the viewing Tuesday night, July 8, inside Lansdale’s St. Stanislaus Church, a throng of patient grievers, including representatives from every school that competes in the Catholic League, waited outside for almost two hours with zero complaint.

The next morning, a poignant funeral Mass included a thought-provoking homily delivered by Father John Flanagan and several moving eulogies, including one from the person Danny Algeo always described as his favorite — his 14-year-old daughter Becca.

The outpouring spoke volumes about the respect Danny Algeo had garnered during a successful career that included several stints as assistant coach plus head coaching posts for three years at Roman Catholic (1996 through 1999) and the past 10 at O’Hara. Combined, the 1983 graduate of Lansdale Catholic and 1990 alum of Gwynedd-Mercy College collected a record of 95-60 and seized two league titles. 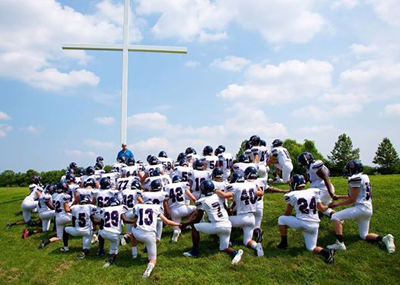 After practices like this, Coach Dan Algeo met with his team to talk football and life beneath a large cross on the Cardinal O’Hara campus.

But wins and losses – and football for that matter – didn’t matter to the burgeoning crowd that still seemed in disbelief of where they were.

When someone is 49 years old, perennially active and always energetic, the mere thought of something so tragic is, in a word, unthinkable. When that person has a last name like Algeo, which has been associated with Catholic education at its finest thanks to a litany of respected relatives who have taught and/or coached for decades, the bewilderment multiplies.

One of nine children born to parents Jim and Mary Margaret, aka “Mickey,” Danny Algeo impacted countless lives as a teacher and coach. At Danny Algeo’s funeral and grave ceremony, every current O’Hara football player wore his jersey.

Chuck Chinici, a legendary teacher, coach and administrator at Malvern Prep since 1978, is a member of Cardinal O’Hara’s first graduating class of 1966. Since he serves on O’Hara’s alumni board, Chinici has seen Danny Algeo on several occasions and found him to be an impressive person.

“I played on O’Hara’s first varsity football team so we talked a lot about Malvern and O’Hara football,” Chinici said. “He was very personable to me when I introduced myself to him about five years ago.

“I am a good friend of his first cousin, Ron Algeo, who is the Upper School Director at Malvern. He couldn’t say enough about the goodness and spirituality of Danny.

“I attend most O’Hara parent/alumni functions and Dan was always there. He would always find time to get together with me at some point during the night and talk local high school football and Malvern Prep and O’Hara football in particular. He was more approachable than most head coaches that I have worked with or have known in my 44 years in education.”

Among them was a testimonial from Steve Weyler, a star kicker and punter who graduated this year and will attend Villanova University. Weyler’s words reflected what many other former players shared.

“I lost more than a coach,” Weyler said. “I lost a great friend. Coach Algeo was a great man. I would not be where I am today without his leadership, friendship and guidance.

“I am in disbelief and utter shock right now. Coach was my biggest supporter and fan. Although I would love to have him with us, I know I have an angel looking down on me, especially on the football field. 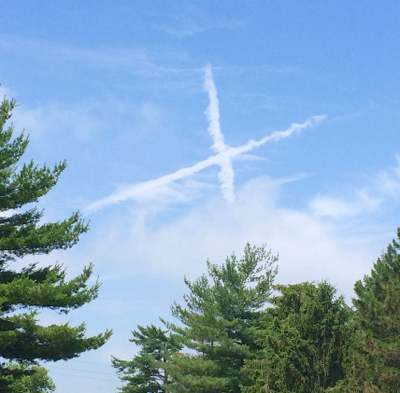 Moments after the Cardinal O’Hara football team met beneath the large cross on hill at the school, following Coach Algeo’s funeral, this image of a cross appeared above in the sky. (Photo by tedsilary.com)

“He was so excited to watch me play this upcoming season, but now he will have the best seat in the house, to every one of my games. His last words to me were, ‘Focus on the kick.’ This season is for you, Coach, because I would not be where I am today without you.”

“As Danny would have wanted, our O’Hara football team gathered this morning at the cross, which he so loved, and offered prayers for him,” she said. “Dan’s faith was so important to him, and every practice, game and team event began and ended with joined hands, in a team prayer. Shortly after our team gathered to comfort each other earlier this morning, we looked up in the sky … there, as a sign to each one of us, was Coach Danny Algeo and his cross.”

Victorious, even to the end.