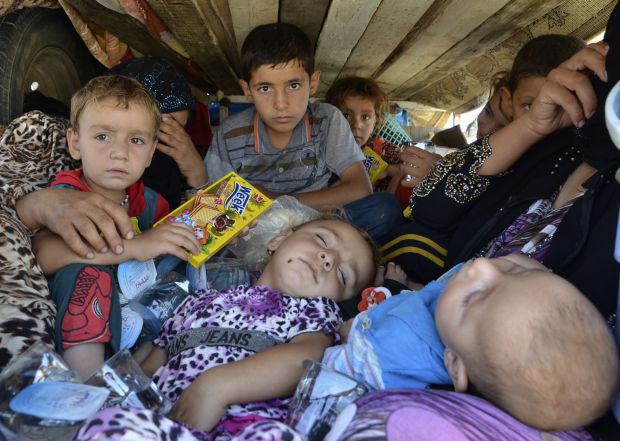 All 219 parishes of the Archdiocese of Philadelphia are invited to join in the Day of Prayer for Iraq at all Masses this weekend, Aug. 16-17.

At the Cathedral Basilica of SS. Peter and Paul in Philadelphia, a Holy Hour with the intention of peace in Iraq will begin at 5:30 p.m. on Sunday, Aug. 17, followed by Mass celebrated by Archbishop Chaput at 6:30.

The prayer initiative is part of a national effort led by the United States Conference of Catholic Bishops and follows the call of Pope Francis for the Catholic Church to join in prayerful solidarity for an immediate end to the violence and destruction in Iraq along with the persecution of Christians in the embattled country.

Archbishop Chaput has asked that Christians in Iraq be remembered in prayer when Catholics gather for celebration of the Mass and for devotional prayer, especially in adoration of the Most Blessed Sacrament and while praying the rosary.

The following specific prayer has been recommended by the archdiocese for the general intercessions during Mass this Sunday:

“For an immediate end to the violence and destruction of life in Iraq, especially as it is directed to the native Christians, that these evils will be defeated by efforts for peace and justice. Let us pray to the Lord — Lord, hear our prayer.”

Patriarch Louis Rafael Sako, head of the Chaldean Catholic Church of Iraq, earlier this month encouraged all Catholics also to pray the following prayer for peace:

“Lord, the plight of our country is deep and the suffering of Christians is severe and frightening. Therefore, we ask you Lord to spare our lives, and to grant us patience, and courage to continue our witness of Christian values with trust and hope. Lord, peace is the foundation of life; grant us the peace and stability that will enable us to live with each other without fear and anxiety, and with dignity and joy. Glory be to you forever.”

On Aug. 7 U.S. President Barack Obama authorized airdrops of humanitarian supplies to thousands of religious minorities in Iraq and limited airstrikes against the Islamic militants in Iraq. Archbishop Joseph E. Kurtz of Louisville, Kentucky, who is president of the USCCB, wrote Obama a letter regarding Iraq Aug. 13.

“This aid should go directly to the minority communities through trusted NGOs, otherwise past experience has shown that aid is diverted,” he said.

He asked that the U.S. government “do all that it can to provide this critical assistance to those in desperate straits and to work with other governments in an effort to stop the violence.”

Bishop Pates reminded Rice he had written to her a month earlier about “the escalating violence in Iraq that targets Christians and other religious communities.”

“I asked that the U.S. government urge Iraqi political leaders to form an inclusive government representative of all ethnic and religious groups, thus reversing the exclusion that has been exploited by extremists. Only in this way can the rule of law be restored and the common good of all be served, he said. “Sadly the situation in Iraq has only deteriorated in the past month.”

In a July 22 statement, Archbishop Joseph E. Kurtz of Louisville, Kentucky, who is president of the USCCB, urged Catholics to join with him in prayer and action for peace in all the world’s trouble spots, including the Middle East, Ukraine, Africa and Central America, pointing in particular to the “terrible crisis of Christians in Iraq.”

“In the coming days and weeks I urge you to ask our Catholic people to pray for peace and to support diplomatic efforts aimed at dialogue and reconciliation,” Archbishop Kurtz said. “As Jesus admonishes us: ‘Blessed are the peacemakers’ (Matthew 5:9). This can be done in personal prayers and in the prayers of the faithful at Mass.”

He added, “We should never underestimate the power of prayer; for it touches and opens us to the power of God among us. My prayer is that together we might help open our world to God’s gift of peace.”

Catholic News Service in Washington contributed to this story.

PREVIOUS: Day of prayer urged for Iraq on Sunday