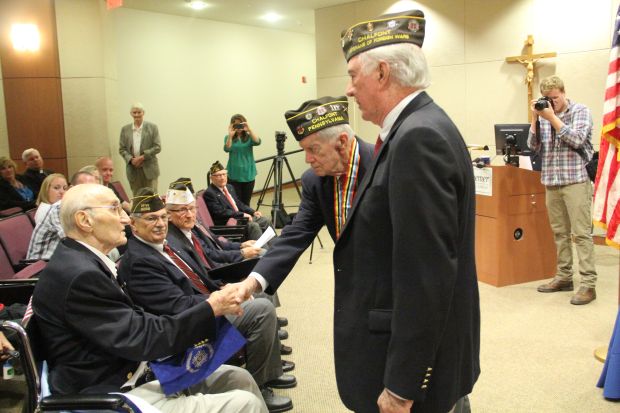 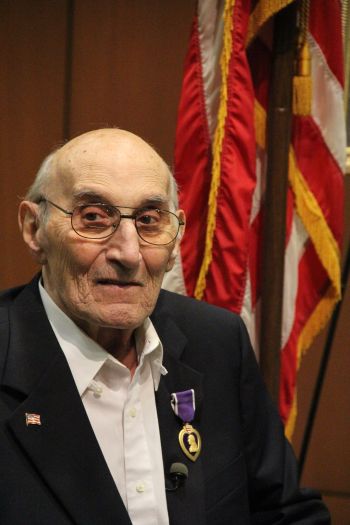 It was a long time coming, but William “Ron” Arpino, 82, a hospice care patient at Holy Redeemer Hospital in Meadowbrook, who was diagnosed with only weeks to live, was presented with the Purple Heart he earned on a battlefield in Korea 61 years ago.

It was his own doing that he hadn’t received it before. Purple Hearts are awarded for combat injury, and when he was notified he would receive it, he turned it down, for fear his mother would hear about it and think he was dead or dying.

It was only recently, with old memories flooding back, that he spoke of the award that he hadn’t accepted. Then his family, friends, veterans from Veterans of Foreign Wars Post 3258, Chalfont, and hospice staff decided to make it right.

On Aug. 11, with all due pomp and ceremony, former Tech Sergeant William R. Arpino received his medal — actually a replica because it takes time to process applications for medals earned in past wars and he doesn’t really have much of that.

“I’m glad I kept it a secret all of these years, I have no regrets,” he said. Serving their country “is something everyone in the world ought to do,” he added. As for how he was injured, he explained, “There was an explosion and I was knocked down and got banged up on my head and shoulders. I lost my hearing for a time.”

“We are really proud of him,” said his daughter, Lu. “He didn’t talk about it a lot unless we asked, but obviously the Korean War was a tremendous experience, something he didn’t like to share.”

In addition to his daughter Lu, Arpino has two sons, Ronny and Jeff, and another daughter Joyce, as well as nine grandchildren and two great-grandchildren with just about the whole clan gathered for the presentation.

Arpino is shown in old photographs from his time in the Army as a tech sergeant during the Korean War.

Originally from Brooklyn, N.Y., he was drafted into the Army not long after high school along with two buddies who served with him just about the whole time. After his discharge he married his wife, Lucille (now deceased), whom he’d met at a Fort Dix dance, and because she was a Philly girl they settled in Philadelphia.

For most of his working life he drove trucks in New York for Coca Cola, in Philadelphia for Sealtest Milk, Freihofer’s Bread and Drake’s Cakes. In recent years he’s been living in Maternity B.V.M. Parish in Northeast Philadelphia.

The Purple Heart descends from an award given by George Washington during the Revolutionary War. It was established to honor ordinary soldiers, not just officers and gentlemen, and is now considered the nation’s oldest military decoration. It is also one of the most frequently granted, because it is given for injuries sustained no matter how serious or slight. 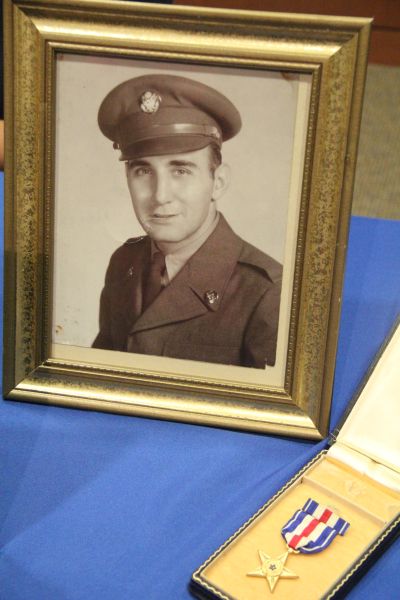 Among photographs at the Purple Heart award ceremony was Ron Arpino’s Silver Star, which he was awarded for gallantry in battle on July 15, 1953, in Korea.

Much more exclusive is the Silver Star, an award for gallantry in battle that Tech Sgt. Arpino also earned and accepted at the time. According to the official citation read by a member of VFW Post 3258, it happened July 15, 1953. It was a place listed as Paugol and he was a squad leader in Company C, 9th Infantry Division.

After three hours of heavy shelling his squad became isolated from the rest of the company, but held off a much larger group of enemy soldiers for 10 hours. He led his men and protected wounded soldiers until the enemy finally retreated. His medals were well earned.

Also participating in the ceremony was Father Timothy Judge, chaplain at Holy Redeemer, who also happens to be a former U.S. Marines Reserves Chaplain with the rank of Lt. Colonel.

“It is an honor for me to be part of the honoring of the men and women who served their country,” said Father Judge, who participates in many military events, especially as chaplain for the Armed Services Council at the Union League of Philadelphia, which was founded as a patriotic organization during the U.S. Civil War.

View video from the ceremony. 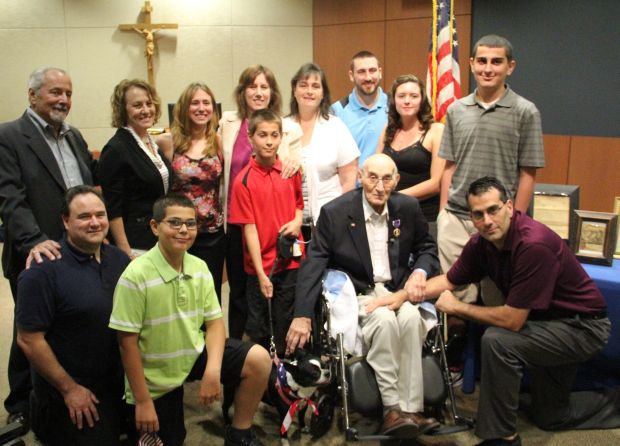 PREVIOUS: Archbishop invites all parishes to pray for peace in Iraq this Sunday

NEXT: Archbishop Chaput hears of suffering in Syria first hand