Some seeds take time to cultivate

When Deacon Michael Pascarella Jr. was ordained to the permanent diaconate two years ago with assignment at his home parish, Epiphany of Our Lord in Plymouth Meeting, he knew at some point after retirement from the federal government he would like to enter full-time ministry in some capacity, perhaps teaching religion.

Now it is about to come true, but not as a classroom teacher. He has just been named Associate to the Vicar for Clergy for Permanent Deacons, succeeding Deacon James Owens, who was the first to hold that post and is now retiring from that part of his ministry.
Deacon Pascarella has already been serving as a part-time assistant to Deacon Owens, and will remain in ministry at Epiphany as a secondary assignment.

Deacon Pascarella always knew he had a calling to ministry of some type, and even considered the priesthood all the way through grade school, at St. Lucy in Manayunk. “Someday you will be in a service profession,” predicted Holy Child Sister Christian Jones, one of his first teachers.

In 1974 he went off to Roman Catholic High School.

“I loved it,” he said. “The influence for the person I am today came mostly from Roman and St. Charles Seminary. I had wonderful priests and teachers, and I keep in touch much more with the people I went with in high school than those I went with in college.”

That was the time Roman started its National Honor Society program. Bishop Daniel Thomas, who was a senior at the time, was the first president. Father Joseph Bongard, who is just returning to Roman in his second stint in leadership there, was also a senior and founding NHS member. So was Deacon Pascarella, who was a member although a junior. The three men now represent the full spectrum of ordained ministry, he notes: “bishop, priest and deacon.” 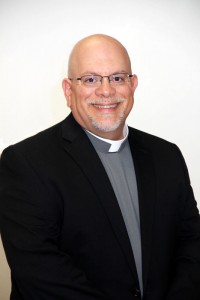 When he was in his senior year Father John Wilz called Deacon Pascarella into the office and told him he thought he had a vocation to the priesthood. He thought it over but put it aside, opting to go to Temple University instead.

He started as a journalism major, meanwhile paying his way through a job in the Philadelphia court system. Through this work he decided to switch his major to criminal justice and graduated in 1982.

In 1984 he married Susan McKeown, a girl from neighboring Holy Family Parish, and a year later he switched from court administration work to probation work.

Because it was his conscious decision to switch from the city system to the federal system he went back to college for a master’s degree in criminal justice at West Chester University. He was hired by the U.S. Probation Office in 1988 and the following year he and Susan moved to Conshohocken but attended several different parishes, and it was during this period, in 1989, he saw his first permanent deacon at a Mass.

He was intrigued enough to research just what a permanent deacon was, but if God was calling him to ministry it was just a whisper. God would have to raise his voice a bit over time.

Meanwhile, Father Francis Sabatini at St. Lucy asked him to go through the Church Ministry Program at St. Charles Seminary, which he did, and although he served in various ministries in the parish he opted not to continue on through the diaconate program, even though God gave him another nudge in 1990.

It was in July of that year while at Malvern Retreat House with Our Lord of the Sea Group. He woke up at 4:30 a.m. fully alert and decided to drop into the chapel although it was not his scheduled time for Eucharistic Adoration.

“I think it was the first and only time I ever experienced contemplative prayer,” he recalls. After an hour as he was preparing to leave, he felt a sudden sensation. He turned around, looked at the tabernacle and said out loud, “Lord, when you want me to become a deacon, let me know.”

That morning after breakfast, Deacon Richard Nightingale, whom he’d known for years, remarked out of the blue, “I’ve been meaning to talk to you for a long time about becoming a deacon.”

You would think this non-coincidence would be the clincher, but it wasn’t. He still hesitated.

For years he and Susan had been hoping for children, and in 1995 their prayers were answered through the birth of their twins, Michael and Matthew, who are now entering their sophomore year at Immaculata studying physical education. “They were both baseball players; that’s a big part of our life,” their father said.

It was 2005 when a letter came in the mail inviting him and Susan to attend an information night for the permanent deacon program. They went and this time it was different. A bit later he took Susan to lunch and asked her what he should do. She put her head down a bit then said, “I think you should apply.”

“She has been with me a thousand percent ever since,” Deacon Pascarella said. “I entered the program in 2006 and with God’s grace I was ordained in 2012. I was ordained by Bishop Thomas. It was Father Wilz (at Roman Catholic) who also told him he had a vocation.”

Meanwhile he’s been enrolled in St. Joseph’s College in Maine for a master’s in theology with a concentration in advanced diaconal studies.

Last year Deacon Owens asked him to serve as assistant, which he has done. Among other things, the role involves assigning deacons to serve on the altar with Archbishop Chaput at the cathedral or when he visits parishes.

“I’ve also been helping with the paperwork and serving as a liaison with the Office for Divine Worship,” Deacon Pascarella said.

In the meantime he’s also been working along with Deacon Kenneth Werner at Epiphany Parish. He preaches every other week, conducts pre-baptism classes, teaches the altar servers and participates in various other ministries that permanent deacons perform to assist their pastor. He also serves as Catholic chaplain for the Harmonville Fire Department.

The ministry has been “beyond my expectations,” he said.

Now as Associate to the Vicar for Clergy for Permanent Deacons, he will retire from the federal government to devote full time to ministry, including keeping his hand in at Epiphany.

“God planted the seed in 1989 and it took years to cultivate it,” Deacon Pascarella said. “I am humbled and I am blessed I was chosen. I am aware that I cannot do this alone. I can only do it with God’s grace. My goal is to surround myself with very bright people and build on the wonderful foundation left to me by Deacon Owens.”

PREVIOUS: Menna helping children to fall in love with Jesus

NEXT: Serving up the Gospel at home and abroad