Serving up the Gospel at home and abroad 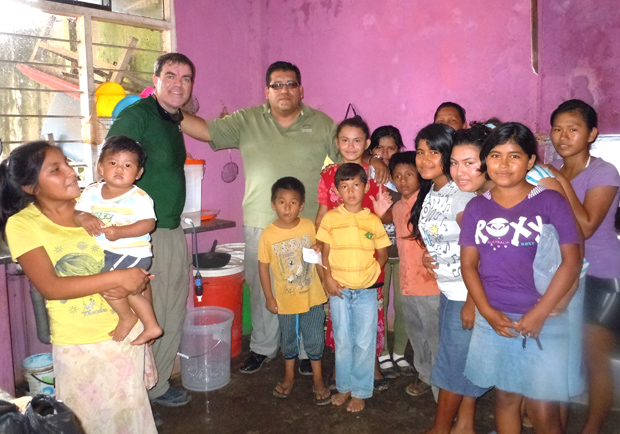 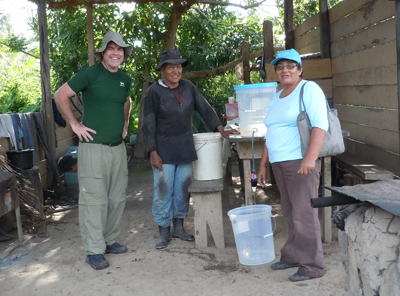 Masterson (left) visits with a farmer in Puerto Maldonado who gathers water from his only source — by catching it in buckets off his roof. At far right in the blue hat is the town’s governor. Among other items, Masterson delivers water purification kits to villagers he meets, since water-borne diseases are a major source of sickness for people in the developing countries he visits.

Even if St. Francis of Assisi never really did say, “Preach the Gospel always, if necessary use words,” it isn’t a bad philosophy. If you want an example of how that is done effectively, check out Tim Masterson, a longtime bartender at Joclyn’s in Media.

He’s done lots of other things too, but this is a job he truly loves and it doesn’t interfere with his true vocation — trying to live the Gospel of Jesus Christ through action, not words. In his spare time he visits some of the poorest sections of the globe, putting into action to the best of his ability the corporal works of mercy.

Originally from Glenolden and a public school graduate with further college education, he now lives in Prospect Park and worships at Blessed Virgin Mary Church, Darby. In recent years he has visited Vietnam, Thailand, Cambodia and Peru three times, and Laos and Costa Rica once.

For charitable distribution he depends on fundraising; the actual travel and living expenses come out of his own pocket. His next fundraiser will be on his home turf at Joclyn’s, on Sept. 27.

“He is really doing a lot of good and I hope people will support him,” said Father Joseph Corley, pastor of Blessed Virgin Mary. “He is a man who is putting his faith into action. He does all kinds of work for the parish, for example delivering items for the St. Vincent de Paul Society. He is unbelievably generous and inspires others to be the same.”

Masterson really started on his outreach to other countries after a 2006 visit to Southeast Asia exposed him to the needs. 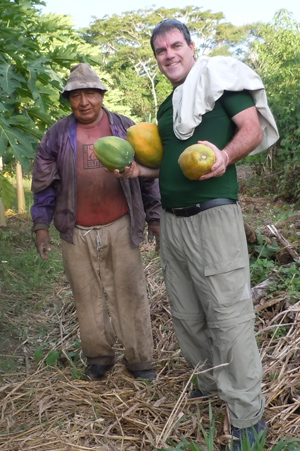 A papya farmer thanks Masterson for the water filter he brought by giving him some of the farm’s best papayas. The farmer speaks Quechua, the ancient language of the Inca people in Peru.

One of a family of six, his work took on special significance after the death of his older brother Jim, from a fall in 2008. After that he established the James J. Masterson Foundation which funnels funds he raises to various charitable efforts.

“My brother was a caring person, a guy that was always helping somebody,” Masterson said. “He was a good guy, he taught me how to be a good Catholic. He was a role model; we were like twins.”

Just like twins, they fought as kids. “Of course we did,” he said. “We fought like crazy, we are Irish Catholics. I can’t tell you how often he kicked my butt, but we never held a grudge.”

The funds he raises are mostly through family, friends, fundraisers at Jocyln’s and wherever else he can. He’s not above salvaging beverage cans or anything else that can be sold for scrap to help the poorest of the poor.

He’s bought about 80 water purification kits and distributed many of them to schools and hospital or other charities in Peru because polluted water is one of the major causes of disease in poor countries. One site that stuck in his mind is a little orphanage run by a priest in rural Peru. It’s in a former brothel and the boys he cares for are children of prostitutes.

He also tries to help Smile Train, a charity through which doctors treat third-world children with cleft palate. The big need is food assistance, because the doctors can’t operate on children who are at risk because of severe malnourishment.

He’d like to visit Haiti next. As a guy who is always thinking of something different, he wants to help provide a bit of employment in Haiti by facilitating the start of a sandal factory, making very practical “Ho Chi Minh sandals” out of old tires, which were the footwear of choice in wartime Vietnam. He’s also tried to assist veterans here at home through Veterans Comfort House.

Not everything he does works the way he hoped but he keeps trying. 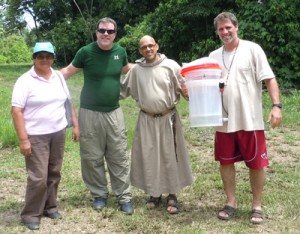 Masterson visits with a Catholic missionary priest in the Peruvian countryside and brings a water purification kit as a gift.

Faith plays a big part in what he does, and prayer is a constant with him. He still has the crucifixes from the funerals of his father and brother and when he prays.

“They remind me of where they are and where I want to go,” Masterson said.

His most constant devotion is to the Sacred Heart. This is so important he buys scads of the little Sacred Heart felt badges enclosed in plastic and gives them to others, maybe somebody he meets on the street, maybe a troubled soul he encounters at the bar.

In the end, “helping people isn’t about ego, it’s about promoting Christ,” he said. “When I help them I don’t ask if they are Catholic or not and I don’t hit people on the head with the Bible, I just do what I have to do.”

NEXT: He’s living with epilepsy, and on a mission