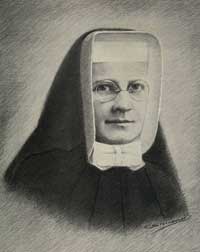 You don’t have to go to Rome to celebrate the beatification of an American Catholic, just over to New Jersey.

Specifically, the Cathedral Basilica of the Sacred Heart in Newark, N.J., is where Sister Miriam Teresa Demjanovich, a Byzantine Catholic sister who died in 1927 at the age of 26, will be beatified on Saturday, Oct. 4 at 9:30 a.m.

Beatification of a person declares his or her personal holiness and special relationship with Jesus Christ. It is one step before the Catholic Church’s declaration of sainthood for the person.

Archbishop Charles Chaput received a letter this week from Bishop Kurt Burnette, bishop of the Catholic Byzantine Eparchy (similar to a diocese) of Passaic, N.J., inviting all Catholics of the area to join in the celebration.

According to the letter Cardinal Angelo Amato, prefect of the Vatican Congregation for the Causes of Saints, will celebrate the liturgy.

“Not many people around the country are aware that an American woman, Sister Miriam Teresa … will be declared ‘blessed,’” Bishop Burnette said in his letter.

Those writings became popular among many Catholic readers when they were published in the 1930s after the saintly sister’s death.

One example of her writing: “What is it to pray? Prayer is the breathing in of the soul of the life-giving ether, God. The soul breathes in God. It should be as natural for us to pray as to breathe.”

And another: “I felt very intensely that if people only sought God in all earnestness they would find him. And if all would only make use of the ordinary duties and trials of their state in the way God intended, they would all become saints.” 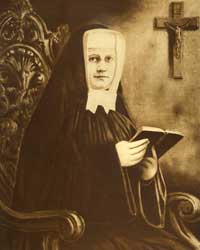 Born in 1901 in Bayonne, N.J., Sister Miriam Teresa earned a bachelor’s degree in literature from the College of St. Elizabeth in New Jersey, a rarity for American women in 1923.

Although raised in the Byzantine Catholic rite, one of the eastern rites of the church, two years after graduation she entered the contemplative religious order of the Sisters of Charity. It was founded by St. Elizabeth Ann Seton, the first American to be declared a saint.

Because Sister Miriam Teresa never professed final vows in the order before her death, she never changed to the Latin Catholic rite, which is why Byzantine Catholics will hail her in a special way for the beatification.

During Sister Miriam Teresa’s short time as a sister she wrote a series of 26 letters anonymously but which were later revealed to be hers, and were published in book form. (Read more about her life and writings at the website of the Sisters of Charity.)

“This highly intelligent and literate woman brings her own eastern analysis to the western systematic view of prayer,” Bishop Burnette said.

He noted that all the American saints including St. John Neumann and St. Katharine Drexel led active lives “as builders and innovators.”

But in the soon-to-be Blessed Miriam Teresa’s case, “It’s interesting that God has willed to present us now with a contemplative saint,” Bishop Burnette said.

The miracle leading to the beatification and attributed to Sister Miriam Teresa’s intercession with God also occurred in New Jersey.

The cause for her canonization was begun by the Paterson (N.J.) Diocese in 1945 and promoted by the Sisters of Charity, especially in a school they ran in Teaneck, northern New Jersey.

One of its students was a boy named Michael, a third grader in 1963 who was deemed legally blind due to bilateral macular degeneration. The condition is incurable now as it was then, and leads to total blindness.

The sisters at the school and all the parishioners of St. Anastasia Parish, Teaneck, prayed for Sister Miriam’s intercession. The boy regained his sight completely, without treatment of any kind.

In the investigation for Sister Miriam Teresa’s cause, the unexplained cure was deemed to be a miracle, leading to her beatification next month.

Read more about Sister Miriam Teresa’s cause in a story by The Beacon, newspaper of the Diocese of Paterson.

PREVIOUS: Bishop McDevitt HS agrees to pact with Arcadia U

NEXT: From a far off land, they’re coming to Overbrook