That all may be one, at least in Bensalem 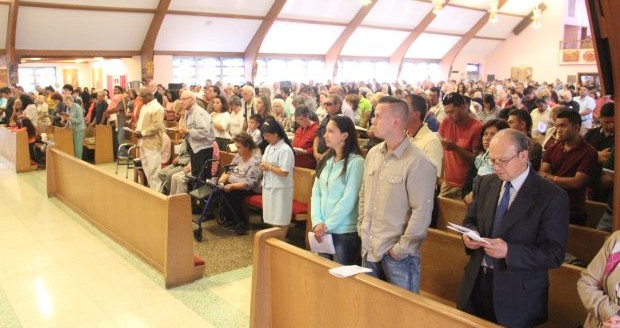 Parishioners worship during a Unification Mass marking the merging of the St. Charles Borromeo and Our Lady of Fatima parishes into St. Charles, in Bensalem. (Photos by Sarah Webb) 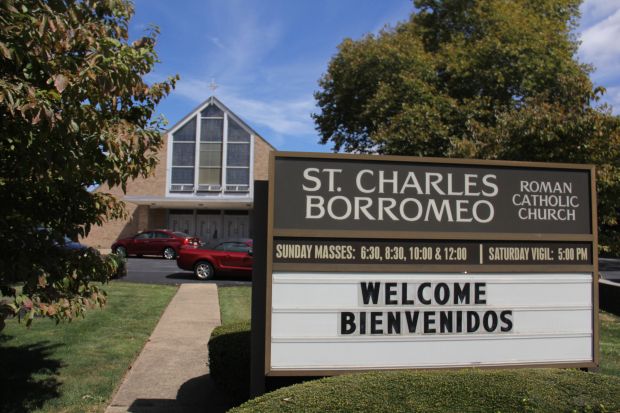 The choirs of St. Charles Borromeo and Our Lady of Fatima sang and played instruments in a reverent setting that reflected a new reality: two parishes in Bensalem, Bucks County, merged into one family.

The occasion was a Unification Mass on Sunday, Sept. 14 that formally welcomed the flock of Our Lady of Fatima Parish into the St. Charles Borromeo fold.

Before the liturgy began, Rafael Gonzalez and his wife, Griselda, rushed with their five children through the parking lot of the church, located at Bristol Pike and Hulmeville Road in Bensalem. Parking was at a premium because of the crowds, and many worshippers had to leave their vehicles some distance from the church.

Rafael, who was a member of Our Lady of Fatima before it merged with St. Charles July 1, said he was pleased with the decision by Msgr. Edward Deliman, pastor of St. Charles, to bring all the people together.

“I think it is best that both parishes come together so they can get a relationship,” the Croydon resident said.

Next to enter the vestibule was Charles Harr, an 18-year-old senior at Father Judge High School in Northeast Philadelphia and an usher at St. Charles. He escorted several people to increasingly crowded pews before taking the time to reflect on the changes brought about by the merger.

“I like that we have this Mass for everyone. It’s been a good transition,” Harr said. 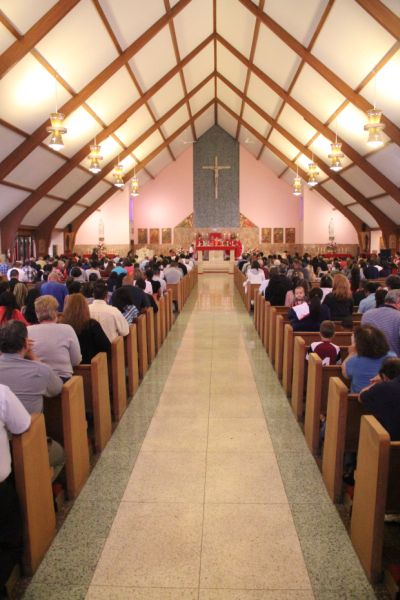 In contrast to the grief at the announcement in June that Our Lady of Fatima would merge, Sunday’s liturgy seemed a joyous occasion. Voices were raised in prayer and song, and longtime parishioners offered warm greetings to new members.

In his homily, Msgr. Deliman spoke of the cross as a symbol of hope and love, and an image that inspired faith. Sept. 14 was the liturgical Feast of the Exaltation of the Cross.

“With faith we can live each day, each month, and each year of our lives. It is the cross that we can follow behind as parishioners of St. Charles Borromeo Parish,” he said.

Msgr. Deliman and Father Charles Ravert, parochial vicar, are both bilingual so Spanish Masses will be offered at both St. Charles and at Our Lady of Fatima Church, which now serves as a worship site for the parish.

Spanish Masses will also be celebrated at Our Lady of Fatima at 7 p.m. on Saturdays and noon on Sundays. Masses in English will be held at 10 a.m. on Sundays.

Following Sunday’s Mass, Msgr. Deliman said he was pleased at how the parish embraced its new members, enabling the flock to move forward and make new friends.

Annamarie Jaskel, who grew up in St. Charles Parish, was not surprised that the liturgy was so well attended and such a happy occasion.

“I believe were are an all-inclusive church. Other parishes (such as St. Ephrem and St. Elizabeth Ann Seton, also in Bensalem) are offshoots of our parish, and it seems that now they are all coming home,” Jaskel said.

Our Lady of Fatima will see new life next month as the Fatima Catholic Outreach Center (Centro Catolico de Fatima), which will be dedicated and blessed Wednesday, Oct. 8 by Auxiliary Bishop John McIntyre.

The center will provide social services to Spanish-speaking residents of the community and everyone is a partnership of archdiocesan Catholic Social Services and St. Mary Medical Center in Langhorne.

Some of the services to be offered include a food cupboard and cooking program, immigration consultations, ESL and citizenship classes, benefits screening and enrollment, parenting education and prenatal support programs, an after-school program and preteen leadership program, plus programs for senior citizens. 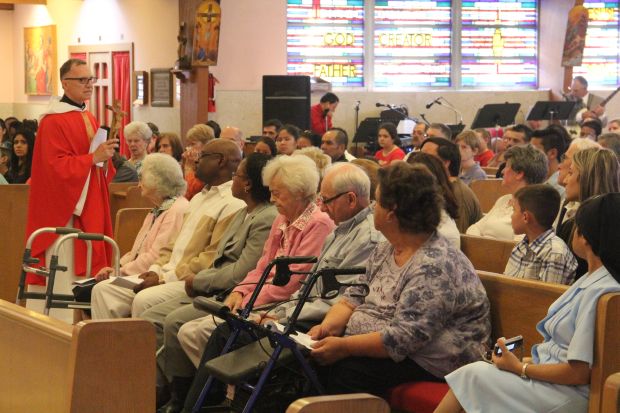 Msgr. Edward Deliman holds a crucifix as he preaches during Mass for the feast of the Exaltation of the Cross, Sept. 14 at St. Charles Borromeo Church.

NEXT: Growing in age, grace – and size