Growing in age, grace – and size 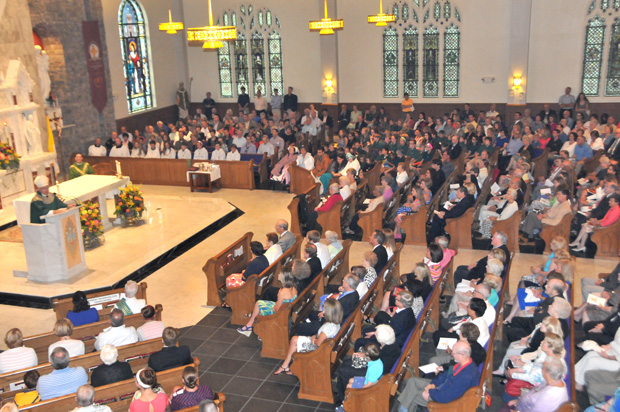 Archbishop Charles Chaput preaches at the opening liturgy for the 100th anniversary celebration of St. Patrick Parish in Malvern. 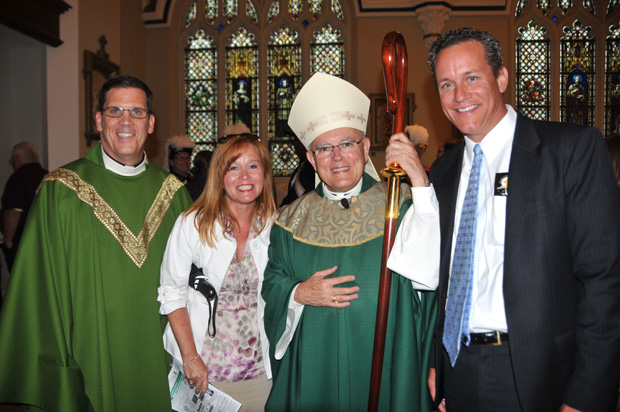 St. Patrick Parish, Malvern, began nine months of celebrations leading up to its 100th anniversary with an evening Mass celebrated by Archbishop Charles J. Chaput on Saturday, Sept. 6 followed by a reception.

The parish was officially founded June 3, 1915, and the founding pastor was Father John Martin. He quickly got down to the business of building a church, executed in stone in the English Gothic style and dedicated Nov. 11, 1917.

It was roughly half the size of the church today and understandably so, because at its founding St. Patrick’s only had about 50 resident year-round families, supplemented in the summer by many more residents including the family of builder John Kelly and the Hardart family of Horn and Hardart’s, who were generous donors to the parish.

As years went by, the church, while an architectural gem, was much too small for a growing population; today it stands at 2,862 households including 8,688 members and average weekend church attendance of 2,267.

In 1990, under Father James Ambrogi — nicknamed “the builder” by his people — a new addition was added that doubled the original capacity yet preserved the outstanding architectural elements including the altars and stained glass. The reoriented church has pews arranged in a more contemporary fashion to bring all the worshipers closer to the altar.

During the course of the reconstruction, the parish worshiped in the gymnasium which had also been built by Father Ambrogi, as well as the parish center, according to Deacon Lawrence Froio, who has been a member of the parish since 1955 and its permanent deacon since 1986. 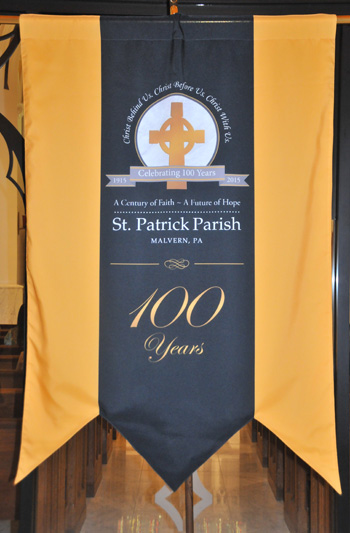 In 1925, in an era when a parish school was the rule not the exception, a little school was opened in a former family home. This was in time replaced by classrooms under the church, and a four-room parish school was built and opened in 1954 by Father James Devers. It was staffed originally by Sisters of St. Joseph.

For much of its early history the school was four classrooms, two grades to a class. St. Patrick School, which now has a lay faculty and about 310 students in grades K-8, received a National School of Excellence award last year.

“It’s a strong parish, very close and more than friendly,” Deacon Froio said. “We have five Masses between Saturday and Sunday and they are full. We’ve had very good priests, good shepherds who were admired by the people.”

“It‘s a vibrant, growing, faith-filled community,” said Father Christopher Redcay, who has been pastor for the past three years. “We have just instituted Eucharistic Adoration on Mondays. I asked for 100 people to sign up and we had 121 people who signed. The people here are very much engaged as part of the community, wanting to be together, wanting to know their faith in a deeper way.”

As an indication of the health of the parish, “we signed up 131 new families in 2013 and we have signed up 95 so far this year,” Father Redcay said. In another indication of parish health, annual baptisms easily outstrip parish funerals.
Over the course of the anniversary year, there are a number of scheduled activities culminating on Sunday, June 7, 2015 with a closing Mass, the sealing of a time capsule and reception.

Not least among the centennial events will be an outreach program by St. Patrick in Malvern to assist its sister parish, St. Patrick in Norristown, which has a very strong ministry to the poor in its area. This will include volunteers traveling to Norristown to be part of a 100 Hours of Service Program by repairing and refurbishing parish buildings.

Also there will be collections throughout the year for school supplies, baby food, diapers and bottles as well as children’s books to begin a lending library at St. Patrick in Norristown.

“Our outreach programs have always been very good,” said Mary Damico, a 17-year parishioner who has been very active with the centennial programs. “We made this parish our home and I love it. It was a very young parish and ripe for a lot of growth when we came; our four children went to the school and the last will graduate this year.”

By coincidence, the foundation of the parish is the exact date the cloistered Sister Servants of the Holy Spirit of Perpetual Adoration (Pink Sisters) arrived in Philadelphia. Because Father Redcay has always had a special regard for them, it is hoped at some point a group will go to their Convent of Divine Love with Father Redcay to celebrate Mass, Damico said.

The parish has many groups of every age and inclination, but all of the programs designated for the centennial year revolve around three categories: “spiritual, social and service,” Damico noted.

Mark Forrest, an internationally known tenor, will present concerts on Dec. 13 and 14; Immaculee Ilibagiza, a Rwandan genocide survivor, will relate her inspiring story on Feb. 19; ValLimzar Jansen will share her spirit and talent through psalms, storytelling and Gospel singing April 18-19. 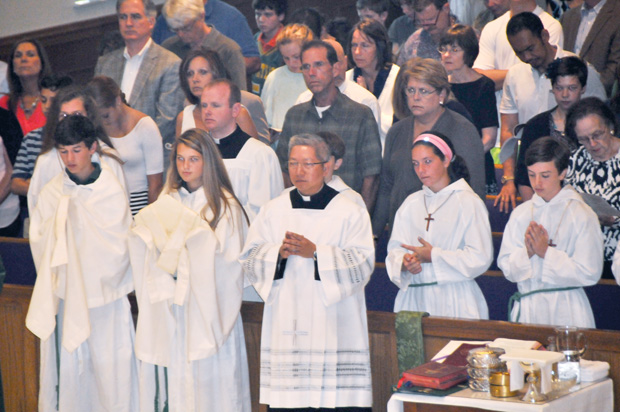 PREVIOUS: That all may be one, at least in Bensalem