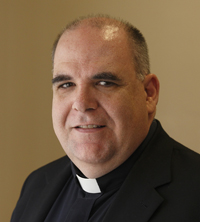 Father Gregory J. Fairbanks, a Philadelphia archdiocesan priest working for the Holy See at the Vatican, has been named a monsignor by Pope Francis.

Msgr. Fairbanks, who was ordained in 1990, works as an official of the Pontifical Council for Promoting Christian Unity and has been granted the title of Chaplain of His Holiness, with the honorary title of Monsignor.