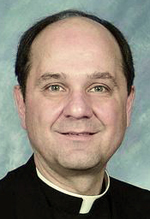 Father Thomas Nasta has been elected for a new term as national chaplain for the First Catholic Slovak Union of the United States and Canada.

The organization, a fraternal benefit society for members and their beneficiaries, elected Father Nasta to the position during its August convention in Philadelphia. It promotes Catholic action movements and Slovak culture, heritage and traditions, according to the group’s literature.

The archdiocesan priest is currently the pastor of Our Lady of Ransom Parish in Northeast Philadelphia.