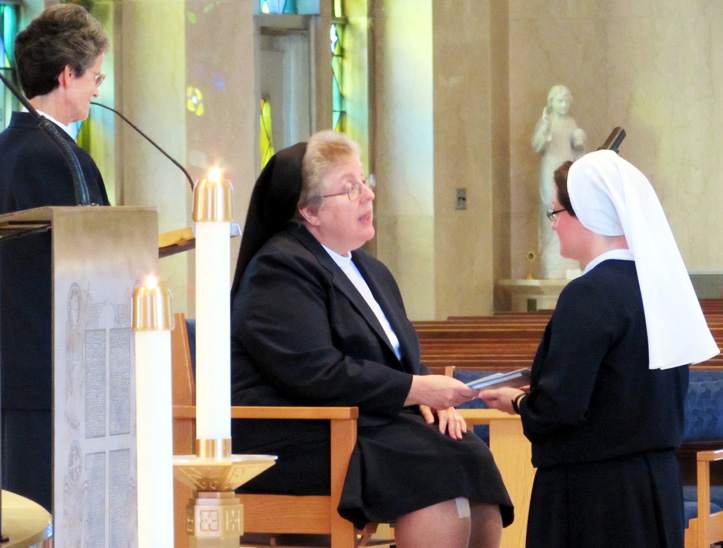 Two women were joyfully welcomed into the Sisters, Servants of the Immaculate Heart of Mary religious congregation as novices in a reception ceremony held Aug. 13 at Villa Maria House of Studies in Immaculata. The entrance of Caitlin Blum and Stephanie Tracy into the novitiate marks the women’s formal introduction to religious life.

Sister Lorraine McGrew, I.H.M., general superior, welcomed each newly received sister, gave each a copy of the constitutions of the congregation and pronounced her religious name. The women entered chapel appearing for the first time in the I.H.M. habit. 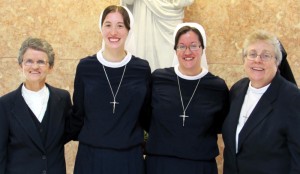 The sisters entered the I.H.M. congregation in September 2013. The first year is called the postulate year, during which the two sisters lived the life of an I.H.M. sister and learned about religious life.  The postulancy afforded them the opportunity to discern and follow their call by God to enter religious life.

During the year the two young women took part in all aspects of community life including private and communal prayers, daily living of community life and participation in the mission of the sisters to evangelize, to catechize and to teach.

As first year, or canonical novices, the sisters will take part in classes related to prayer and theology. In the second year of their novitiate, the sisters will also learn more about the mission and prepare to actively participate in it.

Learn more about the Sisters, Servants of the Immaculate Heart of Mary at their website, ihmimmaculata.org.