Catholic League is ready for some football 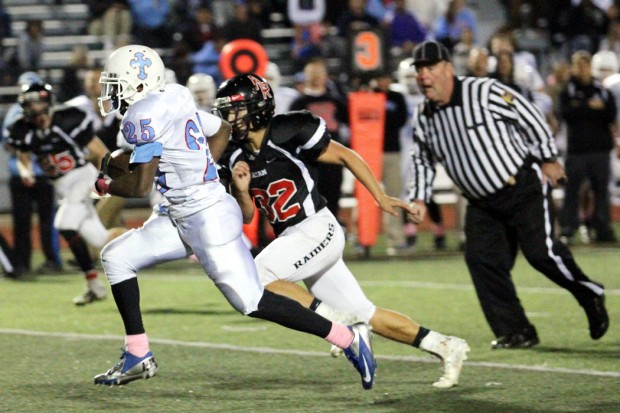 Because enrollment changes every year, some schools are moved from one division to another. The 2014 Catholic League football standings consist of four teams in the AAAA (Father Judge, La Salle, Roman Catholic and St. Joseph’s Prep), five in the AAA (Archbishop Carroll, Archbishop Ryan, Archbishop Wood, Bonner-Prendergast and Cardinal O’Hara), and five in the AA (Bishop McDevitt, Conwell-Egan, Lansdale Catholic, Neumann-Goretti and West Catholic).

Here is a look at how each team has performed with two games in the books. Unless noted otherwise, all players are seniors.

Standouts: QB Kyle Shurmer has posted incredible numbers. After completing 23 of 36 passes for 345 yards and four TDs in the opener, Shurmer contributed a similar performance against Bergen Catholic (22-34, 353, 4 TDs). Jimmy Herron has been the primary receiver, with 20 catches for 289 yards and three TDs.

Standouts: Junior QB Phil DiWilliams was solid in victory (15-25, 279, 3 TDs passing and two more rushing), but he was even better in defeat (25-37, 415, 3 TDs). Those 415 yards are the most ever thrown by a Catholic League quarterback. Against Downingtown, Dimitri Kelly gained 100 yards and a touchdown rushing and added 91 yards on five catches.

Standouts: QB Jack Clements opened the year by completing 11 of 17 passes for 201 yards and three TD’s. Olamide Zaccheaus and John Reid (6 catches for 111 yards) both scored twice in the opener. Sophomore D’Andre Swift gained 86 yards on six carries against a dominant Bosco team.

Standouts: Sophomore Jay Smiley gained 70 yards and scored twice against C-E; all-purpose Joey Rodden started at QB against UM and scored both of his team’s touchdowns.

Standouts:  RB Samir Bullock has gained 235 yards and scored three TDs. Sophomore Matt Romano was 6 of 11 for 131 yards and a touchdown against Judge.

Standouts: A very young Lancers squad contains only six seniors on its 45-man roster. Thus far, freshman Jaron Macon (3 catches for 125 yards and a score in the opener), sophomore QB Max Bryson (combined 21 for 29 passing for 243 yards and two TDs), and junior Vincent DiLeo (26 carries for 166 yards and two TDs) have led the way.

Standouts: Behind a much-improved and steady offensive line, the Eagles run the ball, and run it again. And run it some more. Despite scoring a combined 88 points, they’ve only attempted seven passes. In 16 carries against Carroll, Joe Ruggiero amassed 265 yards, four touchdowns and a two-point conversion run.

Standout: Junior Ryan Quigley has combined for 109 yards on 26 carries.

Standouts: Against Penn Charter, sophomore Aamir Brown rushed for 158 yards and a touchdown on 10 carries while junior Khalil Roane added 82 on 20. From the arm of QB Ray Lenhart (12 of 23 for 136 yards and a TD), Brown also caught 6 passes for 80 yards and a TD tally.

Standouts: Combined statistics include QB Antwain McCollum with 19 completions for 306 yards and two TDS passing, and 191 yards and two TDs rushing on 26 carries; Calil Wortham with 131 yards gained on 29 tries; and Ahkil Crumpton with nine catches for 205 yards and two TDs.